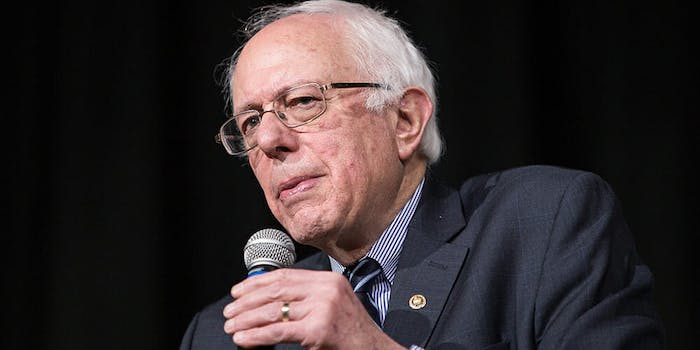 The Bernie bros are back.

Sen. Bernie Sanders  (I-Vt.) on Tuesday announced his bid to run for president in 2020, and with the much-anticipated news came a resurgence of the memes of the senator that the internet has been collecting over the past four years.

Memes were rampant during Sanders’ 2016 bid for the Democratic nomination, and zealots on Twitter were eager Tuesday to flood the timeline with their fondest throwbacks. (Meanwhile, those less enthusiastic about the announcement censored their B*rnie tweets.) From “I watched you Bern” to sad Bernie, some of the most popular Sanders memes resurfaced Tuesday.

Bernie Sanders announces a 2020 presidential run AND Citizen announces a tour in the same day? Time to bring back this meme. pic.twitter.com/DnvkIUwDGl

Heard Bernie Sanders is running for president again. And here I thought the dinosaurs were extinct.

Thankfully means I have a folder full of Bernie memes still worth using. pic.twitter.com/6bDziWWbqE

Bernie Sanders has entered the 2020 race for President. Bring back those priceless memes and gifs! #Bernie2020 pic.twitter.com/KrPjRiuZdR

The motherlode of memes, a Facebook group called Bernie Sanders Meme Stash, also revived with calls for donations to the Sanders campaign and (of course) memes, both old and new. The biggest new meme features Sanders as an asteroid, set to crash-land and wipe out the dinosaurs—here as stand-ins for his rival Democrats.

While 2016 may seem like lifetimes of memes ago, it’s hard not to remember the viral moments that colored the senator’s run, like the Sanders-themed reimagining of the Nike logo and the infamous giant Trump tweet that Sanders dragged on (and dragged onto) the Senate floor. Teens especially latched onto memes featuring the independent candidate, and one even made it into Hillary Clinton’s book.

It’s likely that between now and 2020, whether or not Sanders makes it to the presidential finish line, there will be plenty more memes to come.