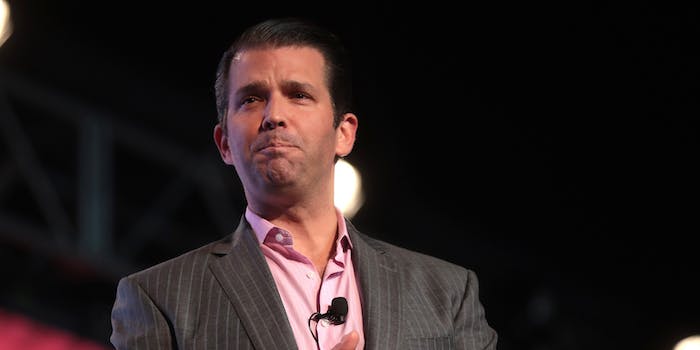 Using a Kermit sipping tea meme, Trump Jr. compared his father’s national emergency to the passing of Obamacare, suggesting Republicans didn’t have a say in that.

And now he is being roasted for his lack of political knowledge.

He’s referring to the bill that passed both houses of Congress, was properly signed into law with a Presidential signature, and appropriated via traditional methods…

Ah yes, we all know how an actual law passed by both houses of Congress and signed by the president is the same thing as an illegal executive order that takes money away from paying our troops. https://t.co/PuTgFvYQFV

He is also comparing apples to oranges because Obamacare and the wall have (very) different agendas:

Conflating giving people an opportunity to get healthy vs a xenophobic racist vanity project is not only ignorant, its a dangerous thought process. Ask the city of Berlin how well a wall worked? https://t.co/e4FYKvorEu

It’s also very dishonest to equate a really unprecedented use of emergency powers, an executive action, with something passing through both bodies of the very resoundingly elected legislature.

Some are commenting on his intelligence (or lack thereof):

I never thought there was a possibility for a dumber Donald J. Trump than the President himself, but here we are. https://t.co/UQjIZ6jKCs

For those who insist that rich people are rich because they're so bright, just a reminder that Junior really is stupid. Not just "not as bright as your average rich guy" but just stupid. Does he not remember congress passing the ACA? https://t.co/lrojd79qrw

This pud is dumber than his old man. We just had an election that President Deals made entirely about the wall and voters rejected it in a record popular vote landslide. Then the new Congress carrying out the will of their voters refused to fund it. https://t.co/xT8RAaDh4M

Remember when people thought your father was a billionaire because he was a great deal maker, and now they know neither is true? Enjoy incarceration, Chinless! https://t.co/p0JIwcg7it

Don Jr.’s tweet came as President Trump announced that he will declare a national emergency to fund his forever anticipated border wall.

The president will also sign the congressional spending bill that averts another government shutdown.