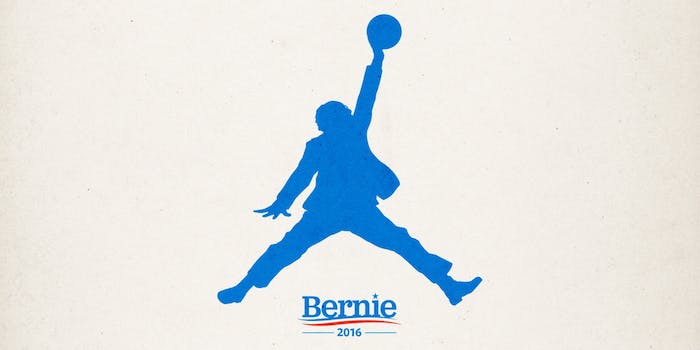 Bernie Sanders gets the Michael Jordan treatment with ‘Jumpman’ logo

He's dunking on the establishment.

Michael “His Airness” Jordan has nothing on Bernie “Partly Hairless” Sanders.

Following a commanding win Tuesday in the New Hampshire primary, the Vermont senator and presidential hopeful and had his likeness iconified into the “Jumpman” pose popularized by Jordan’s Nike brand.

The new Sanders logo was created by designer Aled Lewis, who was not commissioned to do it and who believes it “constitutes fair use under parody.” He shared the image on Reddit’s r/sandersforpresident Wednesday afternoon.

“As a U.K. citizen, I am unable to donate to Bernie’s campaign, so I am contributing in the only way I can, by making stuff in support of Bernie,” Lewis told the Daily Dot in an email. “If it helps raise awareness of Bernie’s campaign and helps to disseminate his message, then that’s a positive thing.”

Another source of inspiration for the Sanders poster came from a video of the senator shooting some hoops, released Tuesday night.

This is not the first time one of Lewis’ posters has captured the attention of Sanders’ Reddit fans. On Jan. 22, Lewis released a stirring image titled “Not me. Us” to overwhelming praise.

“I’ve been looking for our version of Obama’s hope poster and honestly I think this could be it,” redditor kylerschelling commented. “Really well done.”

Sanders will take the stage Thursday for the next Democratic presidential debate in Milwaukee. Lewis hopes to watch.

“I see non-Americans all around the world excited and energized by Bernie’s Presidential campaign, asking what they can do to assist or be involved,” Lewis said. “Quite simply, the themes of Bernie’s message resonate around the globe. His proposals to tackle wealth and income inequality, campaign finance, the living wage, social justice, and healthcare are concerns everywhere. People sense that the system is rigged against them, and that there must be a better way through good governance.”