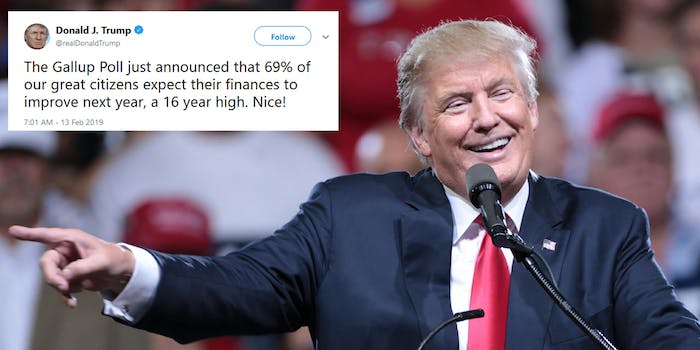 Did Trump just make a ’69-nice’ joke on Twitter?

President Donald Trump may have unintentionally stumbled into an infamous meme on Twitter when celebrating a poll that found 69 percent of people expect their finances to improve next year, by following up the statistic with “nice!” in a tweet.

“The Gallup Poll just announced that 69% of our great citizens expect their finances to improve next year, a 16 year high. Nice!” the president wrote on Twitter on Wednesday morning.

The Gallup Poll just announced that 69% of our great citizens expect their finances to improve next year, a 16 year high. Nice!

Replying with “nice” to tweets with the number 69 in them is a common joke on Twitter.

In fact, it happens a lot.

Of course, Trump’s tweet about a Gallup poll was no different.

Several people on Twitter thought Trump may have inadvertently stumbled into the meme.

does he know the joke, or not. either way i'm cracking up. https://t.co/3wvFtBq4VH

It was Trump’s predecessor, however, who may have kickstarted the Twitter meme.

Senate leaders should listen to the American people. #DoYourJob pic.twitter.com/vArMxcZh5W

And some people believed that Trump’s use of “nice” in a “69” tweet ended the meme for good.