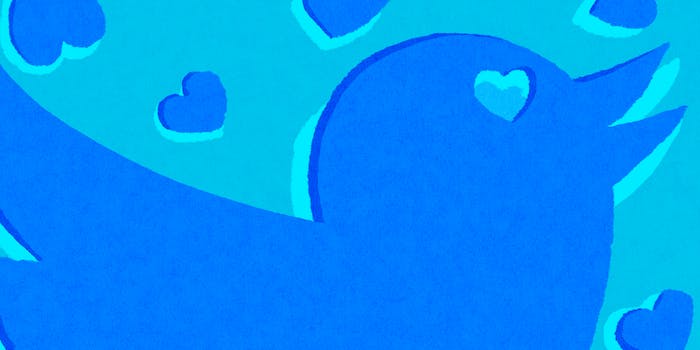 I didn’t want to be left out of the fun.

On Sunday afternoon, artist Darius Kazemi posted a simple, humorous tweet, that spiraled into something so lovely, it could only have been born on Twitter:

Of course, Kazemi’s tweet gets at a couple of things that are both infuriating but interesting about the Internet, and Twitter in particular. For one, the desire for praise of our 140 character count thoughts is undeniable—it’s the whole reason why the ability to “heart” or “retweet” a tweet exists. The blatant ask is funny in its irony and also because it not-so-subtly calls all of Twitter out for seeking pats on the back.

The blatant ask is funny in its irony and also because it not-so-subtly calls all of Twitter out for seeking pats on the back.

But this sort of humor isn’t entirely new; people make jokes about wanting the approval of the nebulous “Internet people” all the time.

The fate of the tweet is the most interesting meta-comment on Twitter I think I’ve ever seen; of course, it took a huge number of tweeters in order to show Twitter at it’s peak.

The result of the light-hearted call to action in a massive chain of quoted retweets, where celebrities and we ordinary folks retweeted with a comment on the previous person’s retweet:

In many cases, the previous retweet served as a jumping off point for the one that came after, and by clicking through to find the first tweet in the chain, you can watch the reactions take different shapes and turn different directions. From praise, to spoofs on vague news headlines, to pseudo-commentary suggesting a rudimentary understanding of a serious mystery subject, the many branches of tweets that stemmed from Kazemi’s original are the perfect caricature of life on Twitter.

As a writer, I am immediately curious whenever I sign on to Twitter and see a tweet in my feed that indicates news is breaking, or a significant essay has dropped. When I saw a fellow writer had quoted a tweet and written, “Glad we’re talking about it at least,” I was intrigued and began clicking through the previous re-tweets.

At this point, I was desperate to read whatever this incendiary scoop was.

After I clicked through four or so, I was frustrated and confused as to why nobody was saying what the hell was actually going on. The commentary only got juicier as I went. “Huge, if true.” “Wouldn’t be surprised if this is news tomorrow.” At this point, I was desperate to read whatever this incendiary scoop was.

Then I finally arrived at Kazemi’s original tweet, I was briefly irritated, then amused, then in awe of how perfectly other tweeters had nailed the directive. The joke was on me, but the beauty of this joke on and for us all, is that being in on it was as easy as picking up on where the tweet landed on our own page.

In true Twitter fashion, I didn’t want to be left out of the fun. “I’m sick of reading about this shit in 2016,” I fired off with a smirk.

As I continued to see different segments of this chain land on my feed at different points throughout the day, I wondered if this was pure silliness, and didn’t really have any meaning, or if it was the ultimately ironic inside-joke. But given how simultaneously disappointed and delighted I was to finally find Kazemi’s tweet, I think I’d have to say it’s most definitely the latter.