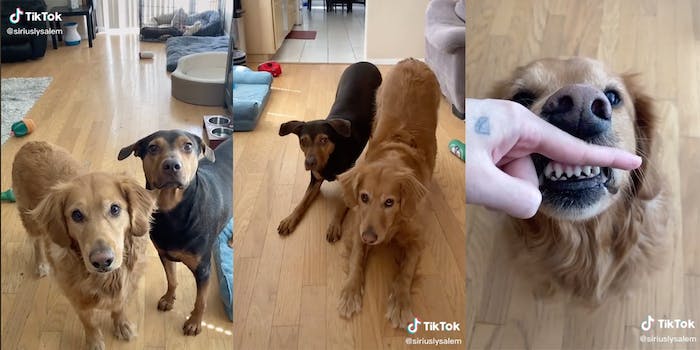 In a viral TikTok video, a dog owner shows off 13 tricks she taught her dogs for fun, including “throw hands,” “talk shit,” and “smile.”

Since it was posted to the platform on Tuesday, the video has amassed over 10.4 million views and 3.2 million likes, with thousands of comments applauding the creator’s abilities as a pet trainer.

“Here’s a lil compilation of tricks I taught them just for fun!” Palmer wrote.

The video begins with Salem and Sirius facing the camera waiting for Palmer to give the first command.

“I’m gonna show you guys all the tricks that I taught them just for fun,” Palmer says.

The next clip shows Sirius growling at the camera when Palmer tells the dog to “talk shit.” The video shows both dogs following each command as Palmer displays their ability to “throw hands,” “get ’em,’” “whisper,” “gentleman,” “boing,” “wave,” and more.

“Also these are just the simple fun tricks they know. They both know 30-55 commands total,” Palmer wrote in the comments.

Palmer told the Daily Dot she’s been training her dogs since they were 8 months old. “Those are just every day tricks I have my dogs do for fun so I never thought so many people would be into it,” she said.

For many users on TikTok, the dogs’ skills were an impressive nod to Palmer’s ability as a trainer. “They’re such good boi’s. They’re better behaved than some humans out there,” one user commented.

TikTokers commented their own training commands and experience teaching their dogs to perform fun tricks during quarantine. “I’m teaching mine to bark at the word ‘men,’” one dog owner wrote.

“As you should,” Palmer responded.

“I love that the only time people use aave is to make a joke or suggest violence. That’s nice. That’s kash money,” one user commented of Palmer’s commands for the dogs to throw hands.

“I was not aware using throw hands was aave & have apologized multiple times/agreed to change the trick completely,” Palmer replied.

Palmer did not immediately respond to the Daily Dot’s request for comment.