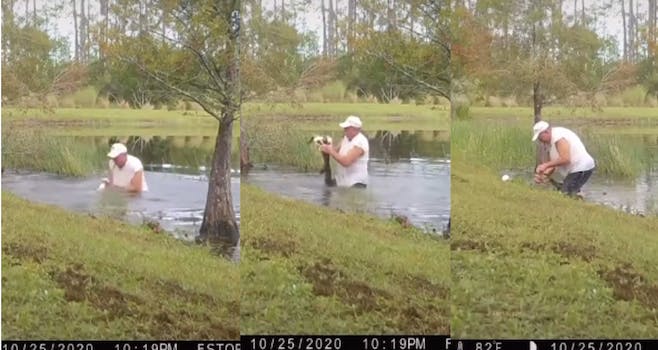 A viral post on Reddit shows footage of a man saving a small white dog from an apparently hungry alligator. The video opens on a man, his arms submerged in a pond, prying open the jaws of a gator. He holds up the gator, opens its mouth, and the whimpering dog limps away.

The viral TikTok video that was posted to Reddit has almost 9 million views. On Friday, this clip enjoyed 69,000 upvotes alone on Reddit’s “Next Fucking Level” forum. It also topped Reddit’s Public Freakout forum. But, what do we actually know about the video?

The version that went viral is from a TikTok clip that was posted this week. The date on the video itself is Oct. 25. It’s common for content creators to upload random viral videos to their channels and spin that jolt of traffic into more engagement for audience development and business purposes. Indeed the TikTok user behind the video is a life coach and her TikTok has more than 8.9 million views. It’s unclear if this person has any IRL connection to the man in the video, but in the comments, she says that the dog survived which may suggest she does. We’ve reached out to her for clarity.

According to TMZ, the incident occurred in Florida. According to the Daily Mail, it’s unknown where in Florida this took place. The life coach’s business page lists a phone number with a Daytona Beach area code.

The Reddit comments are mostly Happy Gilmore jokes while others question the authenticity of the event. But the footage is also apparently from a game camera set up to observe wildlife and it thus makes sense that it was observing a Florida pond full of gators in the first place.

What’s the lesson here? As some helpful citizen of the internet wrote in the Reddit comments, “Dont walk your small dog next to ANY body of water in Florida. And keep small children away from the waterline during dusk and dawn.” Because, as another user wrote, “gators gonna gator.”