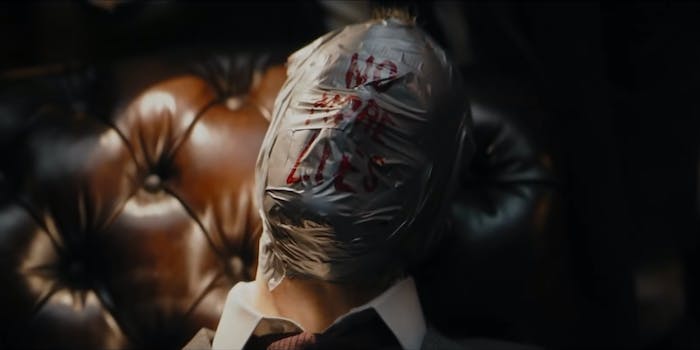 The Riddler will be the main villain in Warner Bros.’ upcoming blockbuster reboot The Batman, played by character actor Paul Dano. But so far, the studio has avoided publicizing what Dano’s Riddler actually looks like. Fans speculated that a masked figure in the trailer was probably the iconic DC villain… but he was so unrecognizable that many viewers didn’t give him a second glance.

Now, some leaked promo materials seemingly confirm that the masked villain was indeed the Riddler, giving us a better look at his costume. And since he looks drastically different from the character in the comics, this redesign is raising some eyebrows.

The Riddler’s iconic look is intentionally over-the-top: a bowler hat and a bright green suit covered in question marks. His best-known screen adaptations, Jim Carrey in Batman Forever and Frank Gorshin in the 1960s Batman, stick relatively close to the source material in terms of visual design.

Unlike the Joker’s many reboots, that original Riddler imagery was never overshadowed by gritty, psychologically complex modern reboots. The Batman wants to change that. The Riddler’s new costume involves a leather mask with eye holes, worn with a nondescript and practical outdoor jacket. Not exactly the theatrical costume we’re used to seeing.

Most of the fan responses to the Riddler’s new look are pretty positive. People recognize that the Riddler’s original costume would be a hard sell for the dark, serious thriller tone of Matt Reeves’ The Batman. People are also picking up on a Zodiac Killer connection, positioning the Riddler as a serial killer who leaves coded clues at his crime scenes.

The Riddler’s makeover fits the tone of the Batman movie franchise for the past 15 years, with Warner Bros. phasing out the more fantastical elements of the comics. Like Christopher Nolan, Reeves is aiming for a dark and “realistic” action-thriller atmosphere. “Realism” is always a complicated idea for Batman, especially when it comes to costume design.

The Batman has now been delayed until March 2022, so fans may have a long wait before they learn more about this enigmatic new version of the Riddler. But Paul Dano’s reputation precedes him, so we have plenty of reasons to be optimistic.