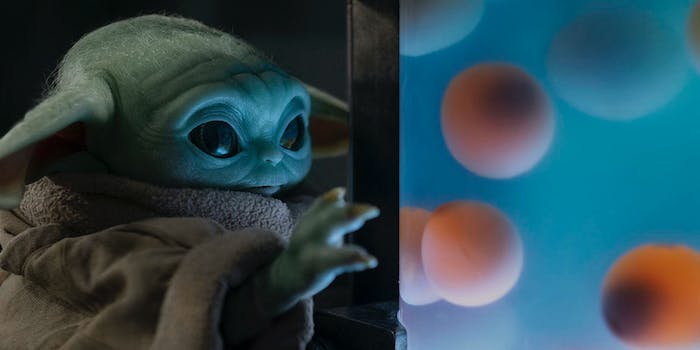 Some viewers were upset after the Child caused major issues.

For the past year, Baby Yoda (the breakout star of The Mandalorian) could do no wrong. With the aesthetics of one of Star Wars’ most powerful Jedi in pint-size form, just about everything he did was cute and funny. But the most recent episode had some fans viewing Baby Yoda’s actions with tints of alarm.

The main story throughout the episode is that Mando is tasked with transporting Frog Lady from Tatooine to the estuary moon of Trask so that her husband—who was already on the planet—could fertilize her eggs, which she keeps in a container. The tradeoff is that Frog Lady’s husband allegedly knows where other Mandalorians are located.

“She needs her eggs fertilized by the equinox or her line will end,” Peli Motto explained, setting up the stakes of the episode. “If you jump into hyperspace, they’ll die.”

Frog Lady emphasized those stakes after Mando crash-landed on the ice planet Maldo Kreis with time running out and few tools to help repair the ship.

“These eggs are the last brood of my life cycle,” Frog Lady said, communicating with Mando by hacking the vocals of Q9-0. “My husband has risked his life to carve out an existence for us on the only planet that is hospitable to our species. We fought too hard and suffered too much to resign ourselves to the extinction of our family line.”

Throughout “The Passenger,” Baby Yoda repeatedly tried (and succeeded) in chowing down on some of Frog Lady’s eggs; it seemed to be more about Baby Yoda being hungry than any kind of malicious intent involved. It’s such a part of the episode that one of Mando’s attempts to stop him prompted Baby Yoda to eat a single ice spider egg, resulting in a swarm of ice spiders hellbent on killing everyone to emerge.

By the episode’s end, Frog Lady is clutching her container of eggs so Baby Yoda can’t get into it again, although he managed to get his hands on one more.

The scenes are largely played for laughs; whenever Mando chides Baby Yoda, he looks back with a cute expression or burps. But what seemed to be a side-effect of the scene is the larger picture it presents. The eggs have yet to be fertilized, but there is a limited supply, and Baby Yoda’s endless hunger is cutting down that number.

It’s a darker, more uncomfortable side to Baby Yoda, who, with the exception of Force-choking Cara Dune to protect Mando last season, has mostly been a very cute creature. And as egg discourse and memes pop up online from people who thought the scenes were a joke while others took great discomfort and offense to the plot, it’s clear that at the very least, it’s complicated. (There’s even a theory about how Baby Yoda was “protecting” the eggs by eating them.)

As Lucasfilm creative art manager Phil Szostak put it, the subplot was meant to be both disturbing and comedic.

“For the record, Chapter 10 of #TheMandalorian makes it clear that the Frog Lady’s eggs are unfertilized, like the chicken eggs many of us enjoy,” Szostak tweeted. “But obviously, chickens aren’t sentient beings and the Child eating the eggs is intentionally disturbing, for comedic effect.”

“Fans of horror know that disturbing things make some of us laugh and some of us squirm, or both,” he added. “Your mileage may vary.”

The episode ends before Mando and Frog Lady reach their destination, and with so little information about what lays ahead on The Mandalorian, we don’t know if we’ll see her again; for now, Frog Lady and her eggs are in limbo. But if it’s any indication demonstrates, even though The Mandalorian is a western fantasy, how easily we can bring our own world into it.