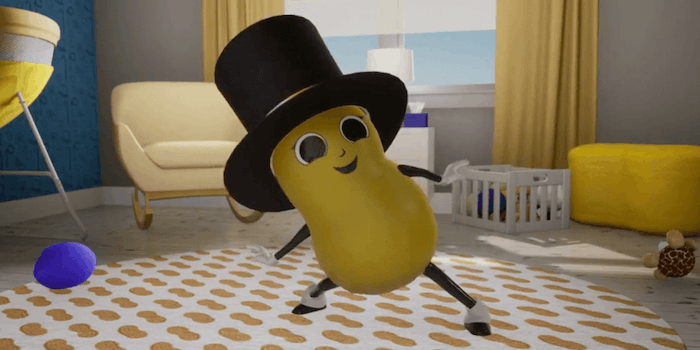 The miniature legume appears to be some sort of reincarnation of its predecessor, minus the monocle and cane. The character rose from the grave of Mr. Peanut as everyone from Mr. Clean to the Kool-Aid Man looked on.

“Hello world, I’m happy to be back,” a tweet from the @MrPeanut account stated. “I can’t believe everyone came together for little old me!”

Hello world, I’m happy to be back! I can’t believe everyone came together for little old me! #BabyNut pic.twitter.com/8DpCFjZzX3

And as you’d expect, the internet had opinions about the new face of Planters. Many fell in love with Baby Nut immediately.

“Everyone shut up and LOOK AT HIM,” Twitter user @dreamxboys wrote. “I think I love him more then literally anyone and anything ever.”

He’s my son. I want him #babynut pic.twitter.com/fmBYoqIAfg

Others accused the company of merely attempting to steal the spotlight from Baby Yoda, the breakout star from the Disney+ series The Mandalorian.

Many envisioned Baby Yoda plotting to destroy Baby Nut. It can be turned into peanut butter, after all.

“Baby Yoda about to use The Force on this Baby Nut charlatan trying to take his place,” Twitter user @mrjafri wrote.

Baby Yoda about to use The Force on this Baby Nut charlatan trying to take his place #babynut pic.twitter.com/uumtUySe0z

But perhaps more than anything, Twitter users were just outright confused as to why Planters thought the name Baby Nut was a good idea. Some even felt uncomfortable typing it out.

“Whoever thought of the phrase #BabyNut should reconsider accepting their marketing degree,” Twitter user @Lanipator wrote. “I feel dirty reading it. But dirtier writing it.”

Whoever thought of the phrase #BabyNut should reconsider accepting their marketing degree. I feel dirty reading it. But dirtier writing it. pic.twitter.com/LfzPMdKMnu

I haven’t been watching the Super Bowl, like, at all, so when I saw #babynut trending I was immediately concerned. Please never do this again. pic.twitter.com/y7oYdjc2Lo

Everyone is also convinced that the FBI will be breaking down doors at any moment thanks to the viral hashtag.

“Someone at the FBI having a long day adding people to lists who tweet out #babynut,” Twitter user @straightedge109 wrote.

The fbi after seeing the hashtag #babynut trending pic.twitter.com/RmjFSlAA7i

But the true question is whether Baby Nut will have the same staying power as Baby Yoda, who has seemingly invaded every aspect of modern society.