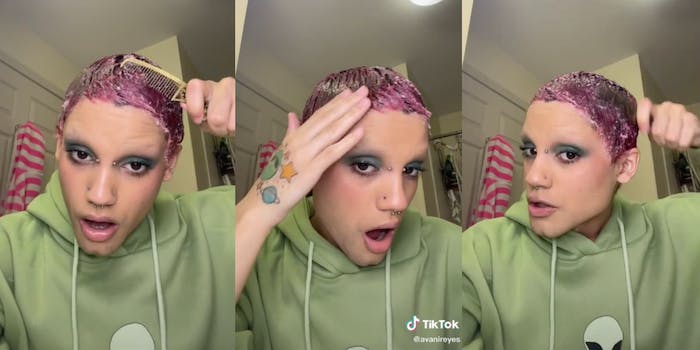 TikToker attempts ‘Gorilla Glue challenge,’ gets turned away at hospital

Another person put Gorilla Glue in a place it’s not meant to go and was subsequently turned away from a hospital.

TikToker Avani Reyes, who has nearly 500,000 followers on the platform, uploaded a TikTok about four days ago, in which her hair seems to be covered in Gorilla Glue.

Reyes’ stunt comes after Tessica Brown went viral for inadvertently putting Gorilla Glue in her hair and then documenting her days-long struggle to get it out, as people who were invested in the saga followed along. The “Gorilla Glue girl” herself was taken to Los Angeles for a four-hour surgical removal of the adhesive.

Reyes uploaded a series of videos as she goes to the hospital in an attempt to get the glue removed. After her visit, Reyes uploaded another TikTok video saying the “hospital did nothing for me.”

In the video, there is what seems to be a patient visit information form advising her to apply oils or to shave the hair off.

“Please help me. I don’t know what to,” Reyes says in another video. “This was an accident. I didn’t mean to put Gorilla Glue in my hair.”

Reyes did not upload an explanation regarding the situation, and commenters on the video were mostly in disbelief that it was an accident.

“An ‘accident’? Nah you saw the clout and money that the other person got and you wanted some,” one user said, referring to the donations Brown received. The comment has over 13,000 likes.

Reyes eventually started a GoFundMe for donors to help with the “Gorilla Glue situation.” Not long after, the TikToker thanked viewers for their donations, saying she raised enough funds for surgery in Los Angeles and claiming that one user even donated $3,000.

There are no updates from Reyes about traveling or surgery on her TikTok page yet. Her most recent video is from two days ago, and it features another one of her attempts to get the glue out of her hair, this time with a blow dryer.

Reyes is not the first person to attempt the so-called “Gorilla Glue Challenge” after Brown went viral. A Louisiana man ended up in the hospital trying to prove Brown’s plight was “not as serious as she tried to make it.”