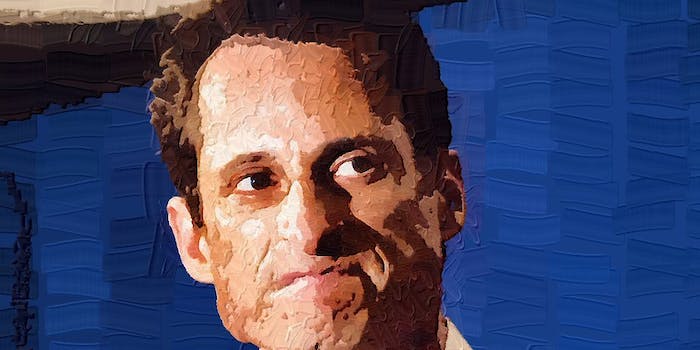 No, Anthony Weiner, the Internet didn’t tank your campaign

When it happens to Anthony Weiner, apparently. According to his latest interview with GQ, the former New York mayoral candidate blames his failure to sway the public, not on his own actions—you know, the ones that involved sending nude pictures to women who aren’t his wife—but on the Internet. For, er, reasons.

There’s a pretty bright line between the people who regard sexting as a repugnant, unnatural practice and those who regard it as absolutely no big deal. In the main, people under 40 can’t understand why it’s even frowned upon. Everybody does it all the time. It’s easy and fun and what the hell.

Weiner’s constituents are a bunch of prudes. Also, it’s the Internet’s fault that the cheating scandal tanked his campaign.

“[M]aybe if the Internet didn’t exist?” the former congressman added. “Like, if I was running in 1955? I’d probably get elected mayor.”

Future politicians of the world: If Weiner’s political career is a cautionary tale, make sure the moral is not “the Internet ruins everything,” but maybe:

3) If you’re caught, whatever you do, don’t blame the Internet for your own actions.

The Internet didn’t ruin Weiner’s life. Rather, the Internet created a fast turnaround time that made it easy for citizens of New York to have crucial facts at their disposal before election time.

If Weiner wants to get all Foucault about it, in his next interview he can blame the patriarchy that’s led to a culture of such rigid sexual mores that a politician can’t even step out on their spouse without getting punished by the whole Internet for it.

Or maybe he’d just rather go cry about it to GQ some more. “I’m a pretty highly evolved campaigning species,” he tells Sella at one point.

For the city of New York’s sake, one can only pray that future campaigners will evolve basic Web skills.