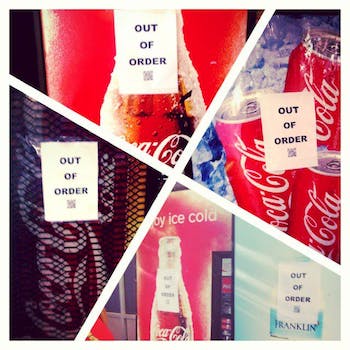 Is Out of Order, backed by Anonymous, free speech and protest within legal limits, or is it out of bounds?

Is Out of Order free speech and protest within legal limits, or is it out of bounds?

Big banks. Big corporations. Big mines. Big environmental damage. That’s what it takes to inspire a big movement, springing off of Facebook and onto ATMs and vending machines throughout Australia.

As the Daily Dot reported last week, Anonymous adopted the cause of the Out of Order movement, encouraging people to place Out of Order signs on Coke vending machines as a protest against Coca-Cola’s successful lawsuit against new recycling laws in the Northern Territory. That’s when one of the organizers from Out of Order reached out via email with more information on the movement, which has been going on for quite some time Down Under.

OoO member Katso wanted to clarify that it was a separate movement that was promoted by hacker collective Anonymous, rather than an Anon Op. “We’re not anonymous or Greenpeace. We’ve had help from Generation Alpha. But Anonymous sounds heaps cooler, so maybe just leave it at that!” Their Facebook group, begun only a couple of months ago, has 4,558 members, and Generation Alpha, a group to encourage people to make the world a better place, has 33,167 Likes.

Katso explained, “We started Out Of Order as a direct, peaceful action in January 13 to fight ANZ bank in solidarity with Jonathan Moylan, who created the Whitehaven Hoax.” The Whitehaven Hoax was a fake press release Moylan disseminated which claimed ANZ banks were withdrawing a huge investment from a mining company, on ethical grounds. Share prices flip-flopped, executives screamed, and the press came out solidly on the side of the spunky little guy; it is Australia, after all. “ANZ are funding many but one particularly unethical coal mine in NSW, Australia, which threatens a population of endangered Koalas as well as guarantees to give climate change a huge boost if the coal is burnt.”

For this action, approximately 40 of us across Australia used OoO notices to covertly disable over 110 ANZ ATMs in a matter of hours without being noticed and then ran a viral campaign on FB with the symbolic images of OoO ATMs to create awareness about the mine. Since then we’ve targeted HSBC [the world’s largest bank] with a smaller campaign for environmental irresponsibility but with the same strategy and that has created more international interest from groups like OWS and Anon. We haven’t finished with HSBC or ANZ though. Not until they become ethical and responsible.

It might sound crazy but I think we’re really on to something. We want corporates to know who we are and that we’re capable of affecting their bottom line if we feel the need.

They are a non-funded organization that relies on individual supporters to download and deploy their Out of Order signs (with a QR code that leads to the Facebook group) as they see fit. It’s exactly the kind of decentralized action that digital technologists predicted back in the ’80s; the question they forgot to ask is, how will the law treat it? As vandalism? As fraud and tortious interference? As terrorism? The Whitehaven Hoax reportedly cost one investor “$180 million dollars in two minutes.” The legal penalty for interfering with business in this fashion was recently increased by 20 times, putting the hoaxer at risk of 10 years in prison, although it seems Moylan has not yet been charged. Public opinion is largely on his side, particularly in light of the quick recovery of the share price.

“The Out of Order campaign involves mass civil disobedience,” says Katso, explaining why Greenpeace and other official organizations haven’t officially adopted the action, though they too target Coke and the big banks. “Placing an OoO notice on a machine is considered vandalism in most places so can’t be supported by actual organisations even though it’s so effective.”

Not stated, but implicit, is the important fact that if someone is caught falsely flagging a vending machine as Out of Order, the jail time for interfering with a couple of dozen units of $2 product is likely to be significantly less than that faced by $380 million man Jonathan Moylan.

Photo from Out of Order/Facebook