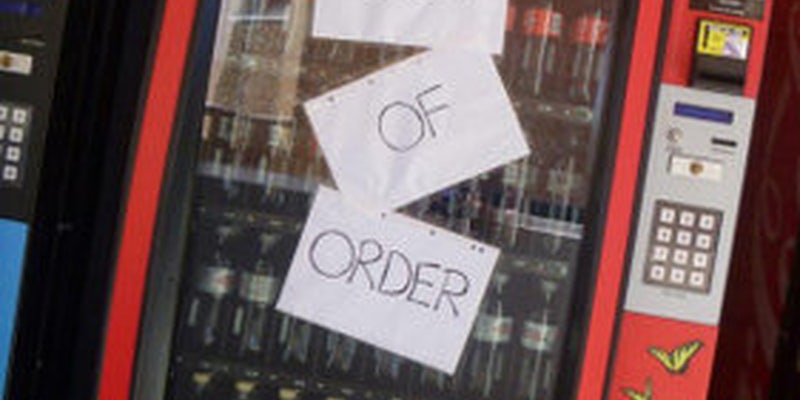 Coca-Cola is #OutofOrder in Australia, thanks to Anonymous

Australian members of Anonymous slapped Out of Order signs on Coke machines across the country to protet Coca-Cola's anti-recycling stance.

It had to happen: in a move designed to strike terror in the hearts of every GMO producer, every mining conglomerate, every disposable consumer good corporation, the shadowy internet force known as Anonymous has aligned with Greenpeace, forming a formidable force to strike back at those who would put consumerism ahead of environmentalism.

This action is indeed The Real Thing.

On Monday, March 4 an alliance of pop (or soda, if you prefer) companies won a court victory against a recycling law which would have forced retailers to give consumers ten cents for each can or bottle they returned in the Northern Territory of Australia. A similar system is in force in the Southern Territory, and throughout most of North America.

Coca-Cola spokesman Alec Wagstaff told ABC, “This decision means that we can move almost immediately to drop prices in the Northern Territory.” They have, however, not announced such a reduction. In response, Greenpeace spokesman Reece Turner retorted, “The number one item that we see in rivers and oceans predominantly is bottles and cans, predominantly from Coca-Cola Amatil.”

As for Anonymous, they’ve sprung off the internet and into meatspace, attaching “Out of Order” signs to Coke machines across Australia. Twitpics confirm the action is spreading, although the hashtag search for #OutOfOrder is cluttered with random Anglophiles and Brits expressing concern with various points of etiquette rather than political protest. To assist protest participants in knowing which brands to target, Anonymous has been tweeting a link to the Wikipedia page of brands under the Coke umbrella.