Anonymous China announced over the weekend it had hacked and defaced hundreds of Chinese government websites.

Did we just witness the opening salvos in a new hacker war against China?

Just days after nascent hacktivist group Anonymous China announced it had defaced hundreds of government websites, a hacker told Reuters he’s breached the defenses of a major company that holds Chinese government defense contracts. And he’s got documents to prove it.

The documents, allegedly nabbed from China National Import & Export Corp, range from internal business memos to U.S. military transport data, according to Reuters, who notes the documents’ authenticity could not be independently verified.

The hacker behind the attack is Hardcore Charlie, a 40-year-old Hispanic man who lives in a country “close to the United States,” he told Reuters. Charlie claims to be a friend of Hector Xavier Monsegur, the former head of hacktivist group LulzSec and current FBI informant.

Charlie plans to “explore” other company networks in China, he told Reuters—but another group already has a jump start on hacking exploration in China.

Anonymous China, a splinter group of hacktivist collective Anonymous, announced over the weekend it had hacked and defaced hundreds of Chinese government websites, which it posted to Pastebin.

Many of those sites are up and running now, so it’s unclear just how many were taken down—or for how long.

One site for a high-tech business sector in the southwestern city of Chengdu was down for at least four days, however. Its homepage, as with others defaced by the hackers, was replaced with a message to the Chinese people: “The Chinese Communist government has subjected its People to unfair laws and unhealthy processes.” The hackers embedded a song—The Who’s “Baba O’Reilly”—in the background.

We can only imagine the extraordinary confusion of Chengdu’s business elite when they logged on to the site over the weekend, greeted by blaring Western music and Guy Fawkes. 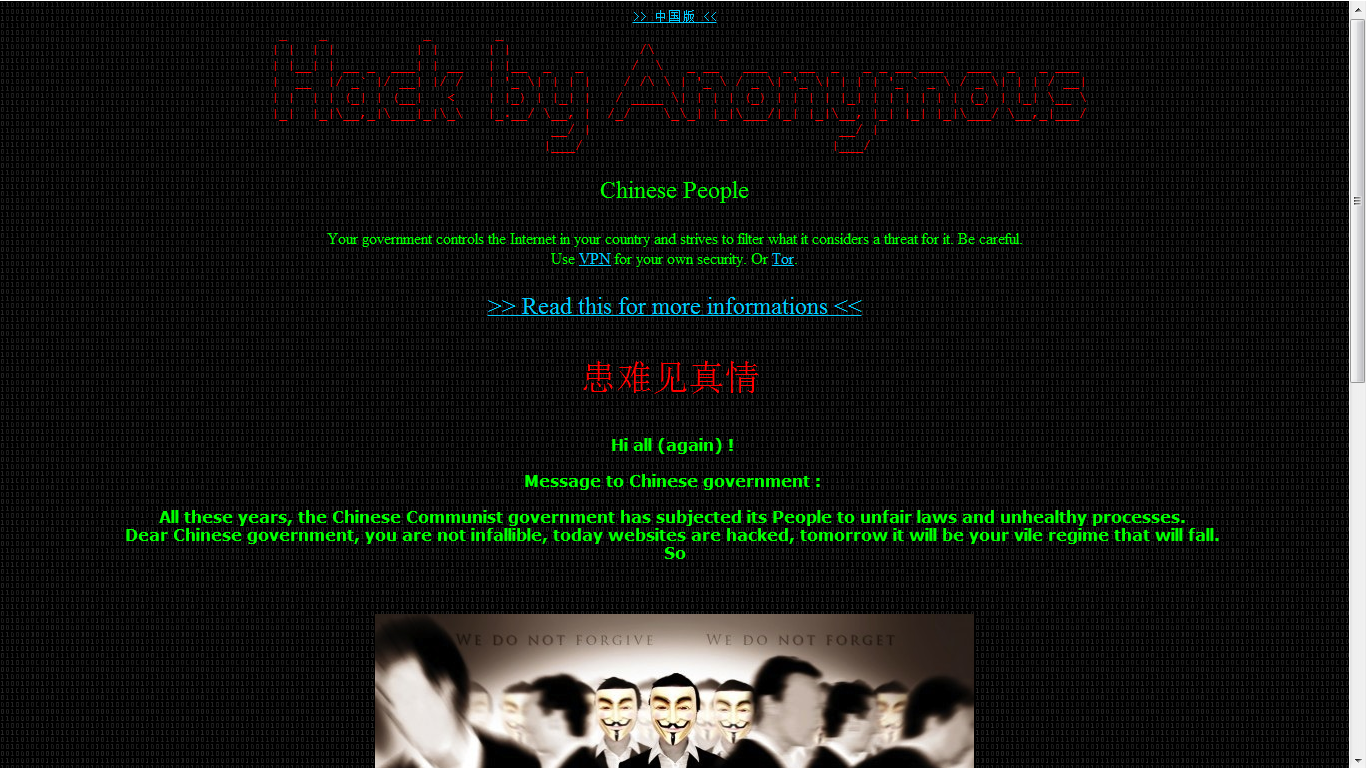 The group uses English on its Twitter account as well, a sign that Anonymous China is likely not composed of native Chinese speakers. That fact was confirmed earlier today when the group posted an advertisement for a Chinese translator.

What’s next on the group’s hit list? “So Chinese Gov hacked again  :D,” the group wrote on its Twitter account earlier today. “let’s see what we have today ;)”

Minutes later, the group linked to site for the land and resource bureau of Taoyuan County in China’s Henan Province—hacked, this time with a message in Chinese.

Here’s the group’s manifesto, which it posted March 30 to Pastebin:

Hello, we are Anonymous.

All these years the Chinese Government has subjected their people to unfair laws and unhealthy processes.
People, each of you suffers from tyranny of that regime.
Fight for justice, fight for freedom, fight for democracy!

In the defaces and leaks in this day, we demonstrate our revolt to the Chinese system. It has to stop! We aren’t asking you for nothing, just saying to protest, to revolt yourself, to be the free person you always want to be! So, we are writing this message to tell you that you should protest, you should revolt yourself protesting and who has the skills for hacking and programming and design and other “computer things” come to our IRC: http://2.webchat.anonops.com/ channel: #GlobalRevolution.

For Anonymous, that’s a declaration of war.