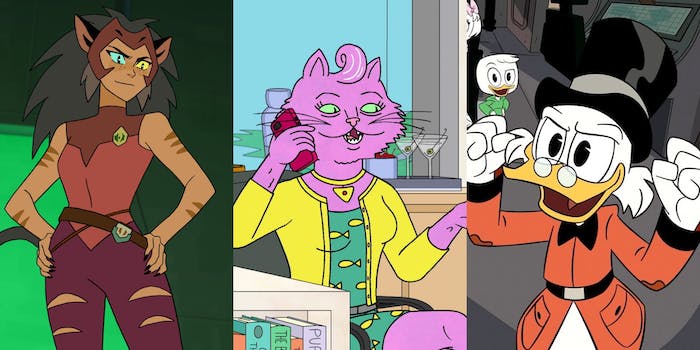 If you’re not a TV industry insider, this may come as a shock: Animation writers are paid much much less than live-action screenwriters, even if they work on a famous title like DuckTales or Gravity Falls. Right now, the Animation Guild is campaigning to close that pay gap, and writers are sharing their horror stories on social media.

“I’ve been working for about a decade,” tweeted animation writer Laura Sreebny, posting on the #PayAnimationWriters hashtag. “I’m an Executive Producer on an animated show for Netflix, and I’m paid less than an entry-level live action staff writer on the first day of their job.”

Others had similar stories to tell, like Big Nate supervising producer Jim Mortensen: “I wrote on AND boarded on AND storyboard directed on 12 episodes of a series for a major streamer, and was still paid less than a starting live-action WGA writer.” (The WGA is the Writers Guild of America, the union for live-action screenwriters.)

“I’ve written for TV & feature, live action & animation, and there is *zero* difference in the skill needed to do great work,” tweeted Gravity Falls creator Alex Hirsch. “so why this huge difference in pay?”

Some writers exposed an insidious strategy that TV networks use to underpay the staff of animated shows.

Have you ever wondered why the seasons for cartoons like Netflix‘s Voltron and Kipo and the Age of Wonderbeasts are so short? According to these writers, it’s so Netflix can avoid giving the staff an end-of-season raise.

“Kipo is a three season show, ten episodes each,” wrote Kipo‘s co-showrunner Bill Wolkoff. “The network promoted it that way. But internally they called it ‘one production order’ which meant none of the artists working on it qualified for raises over the three years it took to make.”

“Networks & streamers buy HUGE season 1 orders of shows & divide them up into artificial ‘seasons’ so no one gets a raise,” tweeted Benjamin Siemon (DuckTales). “I’ve worked on shows w/ 52 episodes split into 4 13-episode seasons. Most ‘early 2nd season pickups’ announcements were always planned.”

Echoing the recent outcry from behind-the-scenes film workers within the IATSE union, the #PayAnimationWriters hashtag ties in with IRL workplace negotiations. The Animation Guild’s current goal is equal pay between animation and live-action writers, with a particular focus on better pay from streaming services.

The Daily Dot has reached out to Netflix, Disney, and the Animation Guild.