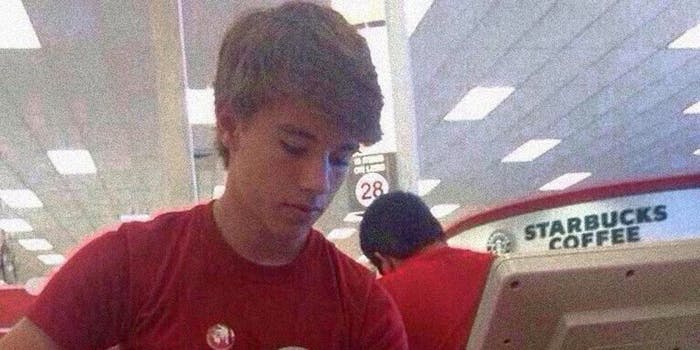 How the Internet turned Alex From Target into a teenage heartthrob

The Alex From Target meme blew up overnight. Who is he, and why is he so popular?

#AlexFromTarget is all the proof you need that teenage fans are the biggest force on the Internet.

Over the weekend, a teenage Target employee named Alex turned into the latest Internet sensation, complete with fanart, memes, and a worldwide trending topic.

On Sunday morning, a young Twitter user, @auscalum, tweeted a picture of a teen working as a Target cashier. Her caption: “YOOOOOOOOOO.”

@auscalum continued her normal day of tweeting, mostly about the band 5SOS, as steam began to pick up on the Alex From Target phenomenon. It wasn’t long before Alex started to trend, and everyone started asking, “What is #AlexFromTarget?”

RV IF YOURE IN THE ALEX FROM TARGET FANDOM 😩😍🙌 https://t.co/n7lGnXgP5m

ok ok stop with alex from target now its long over

The real Alex got wind of his newfound fame Sunday afternoon. We don’t know much about him, except that he does have a girlfriend and they’re from Texas. He’s since had to change his phone number. In a now-deleted tweet, he contemplated making shirts and merchandise. He’s also racked up over 325,000 Twitter followers overnight.

Am i famous now?

Now i have to change my number…

All it takes is an attractive picture of a stranger to whip the Internet into a frenzy. Fine Felon, Ridiculously Photogenic Guy, the new Fine Felon, an Olympics volunteer, even a Crimean attorney general—these memes all came from candid photos. Alex From Target may be even more influential: he’s inspired photos of other attractive teenage boys working service-industry jobs to spread across social media.

“alex from target” “kieran from tmobile” “steve from starbucks” “matt from red robin” what a time to be alive😍 pic.twitter.com/3aHAstsNhF

It’s even spread to celebrities. Fans of One Direction, 5SOS, and teen favorites like Tyler Oakley celebrated their favorite boys working service jobs using their own hashtags.

Target itself even got in on the act, tweeting Monday morning that they, too, love Alex.

It actually remains to be seen if Alex From Target can translate his newfound fame into something that sticks. We don’t even know if he has a talent beyond bagging your purchases, but we wouldn’t be shocked if he made a go of it on Vine or YouTube at the very least. He’s already got people parodying him there, too.