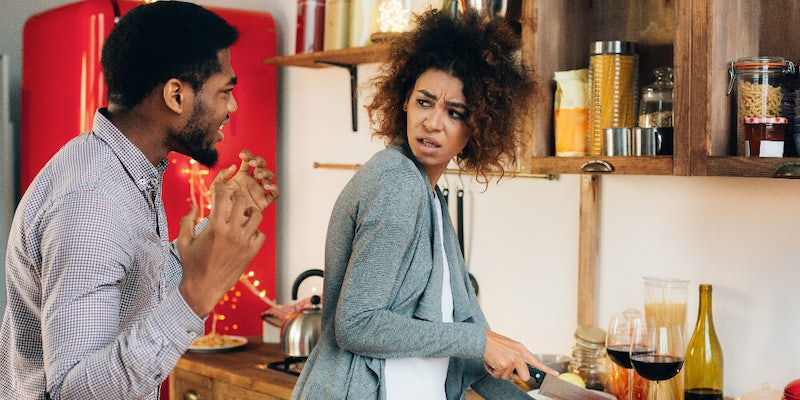 He's not sexist, he promises.

A man, who seems to have absolutely no self-awareness, asked the Am I the Asshole subreddit if he is an asshole for repeatedly asking his female neighbor if she will cook for him.

The redditor is a 31-year-old single guy who lives in an apartment unit alone. The woman, who he dubs “Katie” for the benefit of the subreddit because he doesn’t know her name, lives across the hall from him. Katie’s food smells amazing. He later had to clarify that the only reason he knows it’s Katie’s food that smells amazing is that the cooking didn’t start ’til she moved in (he’s not sexist, he promises).

“I don’t know how to cook, and due to losing one of my part time gigs, I don’t have as much money for takeout anymore. I’m getting really sick of eating cheap fast food or box mac and cheese. I’m gaining weight and I never feel great,” he wrote.

AITA for asking a neighbor if she wanted to share food? from AmItheAsshole

So, despite not knowing her name and only exchanging neighborly “hellos” in passing, he still thought it would be OK to ask her to cook for him.

“I got the idea that I’d offer to give her some money each week to cook a little extra and bring it over to me (or I can pick it up from her!) at night. She’s cooking anyway and then I’d have varied presumably delicious food,” he wrote.

When he shared his not-so-bright idea with Katie, “she looked surprised and said she couldn’t because she was too busy.” But that didn’t make any sense to hungry man, because “she cooks almost every day.”

So, when he saw Katie again, he thought it would be OK to ask her once more to make sure that “she was sure.” He even upped the amount he was offering.

“She said she was sure and that it was rude to ask me, and that she isn’t a housekeeper for hire and I should get a housekeeper if that’s what I want,” he recalled Katie saying (go, Katie!). “She also called me ‘a stranger’ even though we have talked in the halls before.”

“Overall she made me feel like a big jerk and really embarrassed for even asking her, and a little mad because she was acting like I was being creepy (I wasn’t, trust me, she isn’t my type). I think asking her to split cooking wasn’t completely outlandish, since she cooks every day anyway and it wouldn’t be hard to make a little more,” he added.

Even though Katie basically already told him that he was an asshole, he still didn’t get the memo. So, he asked Reddit, which made sure to let him know that, yes, he is an asshole.

“You are a jerk, you were being creepy, and you should be way more embarrassed than you are. Stop harassing your neighbor, learn to cook, and leave her the fuck alone. Christ, OP. She said no,” one redditor responded.

By edit number two, the man demonstrated some semblance of self-awareness.

“Okay. It is abundantly clear that I was the asshole and asking her was inappropriate and, as much as I hate to admit it, creepy. My instinct is to apologize to her but since my instinct was to ask her in the first place, I’ll do the opposite and stay out of her hair. Thanks,” he wrote.