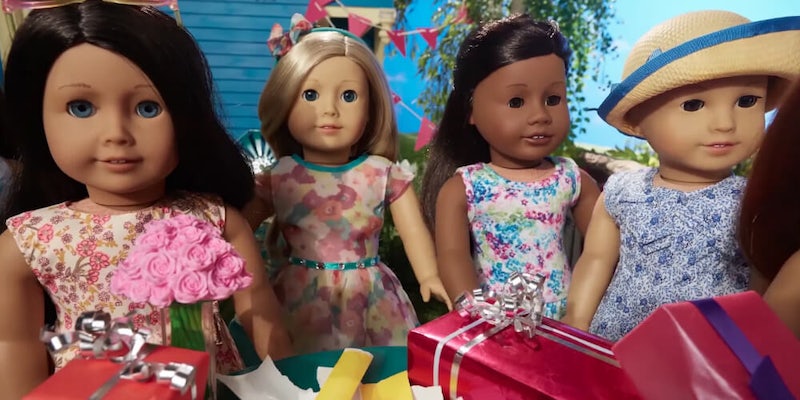 'I tried to apologize but he says I'm dead to him.'

The Reddit Relationships subreddit is home to some of the internet’s strangest tales of relationship missteps.

Stories of accidental incest, overbearing boyfriends, and concerning kinks have been drawing visitors to this strange corner of the internet for years. One of the subreddit’s most recent additions, however, is on a whole new level of strange.

The unofficial Reddit Relationships Twitter account shared a recent story for its more than 200,000 followers to enjoy. It has all the things you never knew a good story needed. Family, (obviously) drama, and… American Girl dolls? The strange story is serving to remind the internet that no matter our relationship with our families, at least our uncles aren’t suing us over dolls.

Shared by an 18-year-old, the story begins innocently enough. The poster explains that his uncle, a wealthy 40-something-year-old, has an unshakable love for American Girl dolls. “It’s always been a quirk of his and it’s his only ‘odd’ hobby,” he wrote. “But he’s build up a huge following of ‘AG Stans’ who go to his website to see his American Girl Doll photography.”

My uncle [49M] is ending our relationship because I [18M] messed up his American Girl Doll website. pic.twitter.com/HbF9CUWXP0

The redditor explains, as the story continues, that his uncle offered a whopping $5,000 for two weeks of work. All the nephew was required to do was travel to his uncle’s home, pose the dolls, and upload photos to the website. Easy enough, right? Perhaps not. After a week of what the redditor thought was solid work, he got a furious response from his uncle. According to his American Girl doll enthusiast uncle, several things were wrong with the images he’d uploaded.

“1) I posed Felicity with Samantha,” the nephew wrote. “Apparently they’re in two separate time periods and that’s unacceptable. 2) I posed Molly with Posy the Lamb. Also not canon. 3) I put Molly’s glasses on Kirsten. Honestly I thought it gave her a unique nerdy look but this was also an issue. 4) I had Addy in Kirsten’s clothes, posing on Samantha’s bed. HUGE issue for him.”

Following the angry response from his uncle, the redditor found out that he was rescinding an offer to provide airfare home. Considering he’d made the trip to his uncle’s home with this assurance in mind, he was understandably upset. “I tried to apologize but he says I’m dead to him,” he wrote. “So in a moment of stupid rage, I posed all the American Girl Dolls scissoring each other while Posy the Lamb watched.”

Was the move immature? Sure. Was it fair after such an aggressive response from the redditor’s uncle? I’ll leave that to you to decide. Regardless, the poster knows he did wrong. “I know I did the wrong thing but he is now threatening to sue me, and it seems a way bigger jerk move to sue a poor 18 year old for this nonsense when you are a millionaire,” he wrote.

While there were certainly those who immediately claimed the post was fake, many in the American Girl doll community affirmed that the reaction seemed spot-on. “As someone in the doll community I can absolutely believe the AG doll community would be that petty,” one user wrote. A surprising number of people agreed. “Worked at American Girl store, can confirm this is 1000% true,” another poster wrote. “I once had an adult man throw hundred dollar bills (BILLS. PLURAL.) at me while screaming loudly that he wanted to buy the display horse and carriage and that money was no factor.”

Worked at American Girl store, can confirm this is 1000% true. I once had an adult man throw hundred dollar bills (BILLS. PLURAL.) at me while screaming loudly that he wanted to buy the display horse and carriage and that money was no factor.

the only thing preventing me from thinking this is completely fake is the deep dive I made into the American Girl fan community earlier this year. it's still very much a thing and many of the classic dolls now go for thousands. I kicked myself for ruining my Molly doll as a kid

The conversation about whether the post is real persists, with many agreeing that it cannot possibly be genuine. While they are breaking down their reasoning, however, the rest of the web is busy lauding the redditor for his power move and desperately searching for the uncle’s American Girl Doll website. Thus far, it remains a mystery.

The scissoring gag was such a power move honestly

He has no case and that was a baller move lmao

— Chris ok but why doesn’t Gamefreak like Flygon (@chrizilla) October 5, 2019

actually scouring the internet rn to find this goddamn website