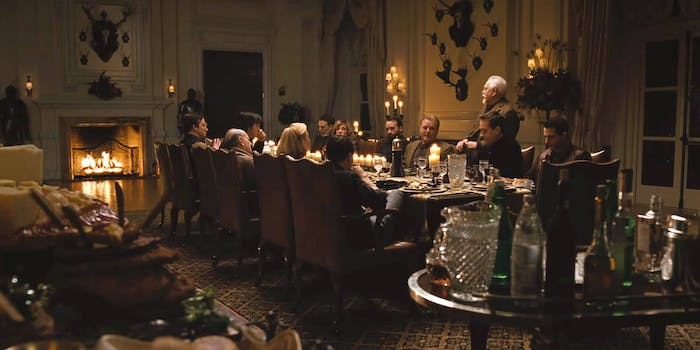 Man obsessed with taking over dad’s company after binging ‘Succession’

He wants to take over the family Halloween store.

A redditor revealed on the “Relationships Advice” subreddit that her husband wants to unseat his father as head of the family Halloween store after binging Succession, an HBO show about a family fighting over control of their media conglomerate the patriarch is seated at the head of.

The redditor, a 29-year-old woman, said her father-in-law (the Logan Roy in this scenario) owns a Halloween store because he is “really into Halloween.” “This store is a labor of love and probably makes very little money,” she wrote.

Regardless, her husband, 31, told her “that he was troubled his father hasn’t named a successor for the Halloween store.” She thought he was joking, but he wasn’t, because a few days later he took up the issue directly with his father.

Upon confrontation, his dad “said nonchalantly that his sister (27) would most likely take over because she lives nearby and doesn’t already work full time.”

Even though the father is only 56 years old and “not really close to being ‘unfit’ to run a Halloween seasonal store,” the husband “started trying to find evidence that his dad was no longer fit to run the store.”

He then scheduled a meeting with the store’s “shareholders”–who she later found out were two teen boys he accosted into checking into the store on Facebook and posting that the store was in need of new management.

After she accused him of trying to “act out Succession,” he told her that his quest to take over the store has “nothing to do with the show” and that the accusation was “crazy.” He also said the store is unsafe without a named successor.

“Then the sexual stuff got weird. I’m not a stranger to kinks, but he’s now asking me to blow him and spit his load into his mouth. Which is fine, but again this is from Succession,” she wrote. “Now that we are watching Season 2 he’s developed a humiliation fetish and just wants me to call him a pathetic worm while he masturbates in the bathroom. He also denies this being related to Succession.”

She became worried that he might quit his job after suggesting they move 200 miles to live closer to the store.

“I wouldn’t mind it if it was a joke but literally everything he says is a line from Succession. For example he now says ‘fuck off’ all the time and asked if a framed portrait in our house would be ‘too Saddam,'” she wrote. “He then denies he’s doing Succession and tells me I’m micromanaging his language.”

She’s even concerned his “little role play” might evolve into drug use, as characters in the show use drugs.

“He is still plotting to take over the Halloween store and our sex life is already ruined so now I’m afraid our financial life is next. If he quits his job to ‘take over’ the store we will be broke,” the redditor wrote. “This isn’t the first time he’s become weirdly obsessed with a TV show but in the past I’ve usually been able to ignore it. What do we do?”

Some think the story is an HBO PR stunt, with one user saying, “Advertising is getting weirdly sophisticated.”

Yet, the redditor claims it’s real. She said this wasn’t the first time her husband became obsessed with a show. She said he tried to find out who all the local drug dealers were–even keeping a map, detailing his findings–after they watched The Wire, another HBO show about the Baltimore drug scene.

For many, the obvious solution is to get him hooked on a new, less harmful show like The Great British Bake Off.

But, “man, don’t binge Dexter with him.”

Suggestion: Get him watching The Good Place.

Books could also pose a distinct threat. Best to stick to instrumental music and abstract dance performances for their entertainment.