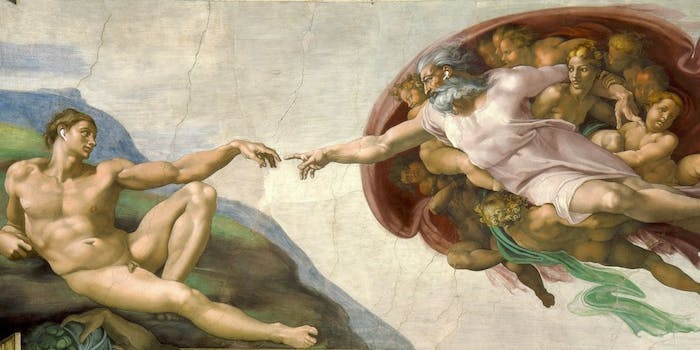 If Vincent Van Gogh had a sweet pair of Apple AirPods, he probably would have listened to Ariana Grande’s “7 Rings” on repeat.

To find out what that would look like, people are photoshopping AirPods onto famous works of art online. It’s a meme. It’s a challenge. It’s a mood—there’s something arresting about them.

You’ve likely seen these hilarious photoshops around the internet over the past months, but a recent Twitter challenge incited several would-be Picassos to try their hand at adding Apple’s wireless earbuds.

Creative marketing agency Article Group took to Twitter with a hilarious prompt, asking users to photoshop AirPods on famous works of art. The group’s “design challenge” launched some of the funniest posts the platform had seen in some time.

can someone start photoshopping air pods into famous works of art? that's my design challenge for you all

Article Group kicked things off with some great examples of what it was looking for.

After seeing some particularly awesome submissions, the agency upped the stakes of the contest, which was originally apparently just for fun. Five trophies to the best photoshops were up for grabs, and the company planned on donating $500 in the winners’ names to the Brooklyn Arts Council.

sooo we're going to be awarding five (5!) trophies to winners of this challenge AND donating $500 in their names to the @BKArtsCouncil. many of us live in brooklyn + want to give back to an org that provides free events + affordable art resources for artists in our home borough

Users were off to the races.

i hope it is not too late to submit. grant wood's american gothic "airpods" pic.twitter.com/pbrTGZy2FC

"We ❤ 2 Dance" by Henri Matisse pic.twitter.com/qE2Np6PZis

How about some Caravaggio? pic.twitter.com/Hn51W3Re2C

But there could only be five winners. And so, the five folks who took home trophies and handsome donations in their name were these talented individuals, who dropped Pods on Michaelangelo, Kehinde Wiley’s Obama portrait, Frida Kahlo, and the Chauvet Cave paintings, respectively.

our first honorable mention and the recipient of a very shiny trophy is @LucyFurTweets for this twist on "the creation of adam"!!! great job!!! https://t.co/A1hSNweFs1

our second honorable mention and the recipient of another very shiny trophy is @deetledeetdeet for this take on "the two fridas"!!!! just splendid stuff!! https://t.co/nCcMjf672W

and now, 3rd place (and yet another very shiny trophy) goes to @yurivictor for this spin on Obama's presidential portrait!!!! three cheers!! https://t.co/TxlvzjXk79

2nd place (and ANOTHER shiny trophy) goes to @__andrew_m for this rendition of the chavet cave paintings!! brilliant! https://t.co/FBEK4tYs9L

and our 1ST PLACE WINNER, who will receive a super shiny trophy and internet glory, is @pacificobob for this take on frida kahlo's "self-portrait with thorn necklace and hummingbird"!!!!! simply marvelous!!! https://t.co/xQ9u7iy2E3

AirPods this week were also linked to studies that say the Bluetooth tech in them, beamed so close to the inner skull, may cause cancer. Scientists have launched a petition to bring awareness to their research.

We’ll always have these fleeting works of art.