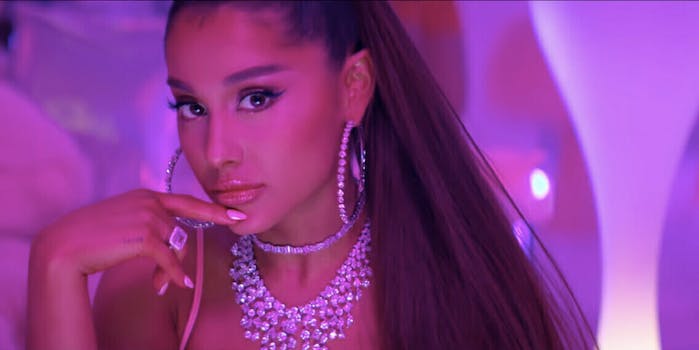 Just when we thought nothing could top Ariana Grande’s “Thank U, Next” and its nostalgia-inducing music video, she drops her new single “7 Rings” and its video in one fell swoop late Thursday.

Grande first teased “7 Rings” on the “Thank U, Next” video. Fans heard a snippet of the song at the beginning of the clip and spotted the title on the license plate of a convertible in the Legally Blonde segment, leading them to guess that “7 Rings” is a track in her upcoming album. Grande confirmed their theory in response to a fan’s tweet, saying she wrote the song after getting tipsy at Tiffany’s, where she ended up buying rings for herself and her friends.

well …………. ‘twas a pretty rough day in nyc. my friends took me to tiffany’s. we had too much champagne. i bought us all rings. 💍 it was very insane and funny. & on the way back to the stu njomza was like ‘bitch, this gotta be a song lol’. so we wrote it that afternoon. https://t.co/CoczmPj1Fo

Fans have been waiting for it since, and Grande herself expertly hyped up the release with teasers and a countdown this week.

The bright pink and blingy music video directed by Hannah Lux Davis pretty much gives us the visuals on what went down that day at Tiffany’s, which led to a cacthy beat that will get us through this Friday.

The melody borrowed a riff from The Sound of Music classic “My Favorite Things,” and Grande updated the lyrics with all the luxurious things she likes and got for herself.

“Yeah, breakfast at Tiffany’s and bottles of bubbles
Girls with tattoos who like getting in trouble
Lashes and diamonds, ATM machines
Buy myself all of my favorite things, yeah”

Naturally, the lyrics and video got everyone feeling broke—and the Twitter memes have rolled in.

“Ariana is basically dragging us broke b*tches with this song and I love it,” tweets @ksjcherry.

Ariana really just told us all we’re broke AND depressed to the tune of “My Favorite Things” #7rings pic.twitter.com/jDp0dCn0dC

My $8.10 in my bank account watching me dance to #7Rings pic.twitter.com/rFoASi3kVZ

Me listening to Ariana call me a broke bitch for 3 minutes #7rings pic.twitter.com/vAEWfU8984

me listening to #7Rings and singing “I got my receipts, be lookin' like phone numbers” like I don’t have a grand total of $6.47 in my savings account pic.twitter.com/EwApTk3NLV

ariana called all of us broke and we’re not complaining #7Rings pic.twitter.com/07pWgs1s1B

People are especially triggered by this line: “’Whoever said money can’t solve your problems, must not have had enough money to solve ’em’ …. I feel attacked,” wrote @iamnivenshi.

“whoever said money can't solve your problems? must not have had enough money to solve 'em” #7Rings pic.twitter.com/fyqKa95qS3

#7Rings
ArianaGrande: "whoever said money can't solve your problems, must not have enough money to solve 'em."

"Who ever said money can't solve your problems
must not have had enough money to solve them"
My broke ass:#7Rings pic.twitter.com/EAEQr622Tw

The song’s got them feeling the complete opposite: “This song has me about to make some really irresponsible financial decisions,” quips @lmlyuh.

this song has me about to make some really irresponsible financial decisions #7Rings pic.twitter.com/rOCk3KOLcy

me with 5$ on my bank account: "I GOT IT"#7Rings pic.twitter.com/PhKDm8P5DO

me dancing to #7rings even though my bank account is literally -$516 pic.twitter.com/mIVoqCJr5s

listening to 7 rings while having $13.67 in my bank account #7Rings pic.twitter.com/gq8CcHI2Mc

#7RINGS me listening to 7 rings knowing damn well I only have a few cents to my name pic.twitter.com/58lYyZ8tDD

My only mood after #7Rings. This the energy that will carry me through 2019. pic.twitter.com/98ipMKSB05

We have come to expect Grande’s new songs and videos to cause Twitter to unleash a wealth of memes, and boy, users did not disappoint:

tomorrow when I get paid pic.twitter.com/rqXRDjKv38

You like, my hair? Gee thanks, just bought it 💕 #7rings #ssbu pic.twitter.com/9z9hMRKcBA

You like my hair ? Gee, thanks, just bought it #7Rings pic.twitter.com/yEBfILA36H

Fans love the song so much, they think the Grammy-nominated singer’s about to give rappers a run for their money:

ARIANA GRANDE writes her own raps now and CARDI B still doesnt know how to hold a pen #7Rings pic.twitter.com/1U8FPHNg70

“7 Rings” is definitely the perfect anthem to celebrate this weekend with your friends, but it should come with a warning: Hang on to your wallets. (Also, maybe don’t get drunk at Tiffany’s.)