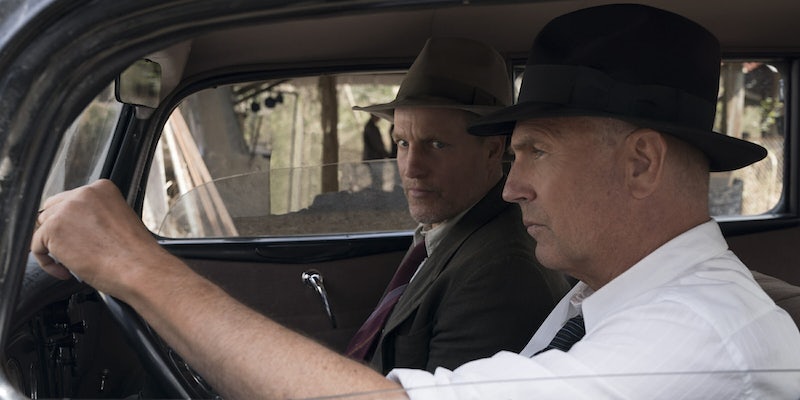 ‘The Highwaymen’ tries to do right by Frank Hamer

Netflix's story of the men who took down Bonnie and Clyde debuted at SXSW.

The Highwaymen takes viewers on a captivating journey through the untold story of the Texas Rangers who took down Bonnie and Clyde.

RELEASE DATE: 3/29/2019
DIRECTOR: John Lee Hancock
STREAMING: Netflix
The Netflix film tells the story of the men who took down Bonnie and Clyde while shrouding the infamous criminals in mystery.

The Netflix-produced film does the seemingly impossible as it turns two well-known figures who usually steal the show into mysterious characters whom viewers rarely get to see or hear. Director John Lee Hancock said he wanted to sex Bonnie and Clyde up as much as possible and shoot them like a “graphic novel.”

“We never get quite a good look at them,” Hancock said during a Q&A at the end of The Highwaymen‘s SXSW 2019 premiere. “Hopefully so that the viewers will be aligned with a lot of the people at the time period, kind of idolizing them as being so sexy.”

In a world increasingly fascinated by villains and bad guys, The Highwaymen simply lets its heroes be heroes. Viewers see the carnage Bonnie and Clyde leave in their wake, but the film instead focuses on the Rangers’ mission to put an end to their violence. The cinematically beautiful and surprisingly funny film also boasts a star-studded cast with supreme acting chops, including Kevin Costner as Frank Hamer, Woody Harrelson as Maney Gault, Kim Dickens as Gladys Hamer, and Kathy Bates as Governor Ma Ferguson.

Costner said the 1967 Bonnie and Clyde depiction of Hamer was a “combination of characters” instead of who he actually was as a person. These artistic liberties damaged Hamer’s reputation and resulted in a successful defamation suit against the producers by Hamer’s widow and son.

“The representation of Frank Hamer was such an atrocity and an injustice that we wanted to set it right,” The Highwaymen screenwriter John Fusco said at the premiere. “Hamer was made a villain.”

This time, Costner wanted the opportunity to do right by Hamer and his family, and he delivered. The actor’s performance solidifies the detective as a heroic character in cinematic history.

“Frank Hamer was a combination of different people and he was made… a buffoon,” Costner said at The Highwaymen premiere. “To… set the record a littler straighter for the Hamer family is something I’m going to walk out of here feeling a lot better about.”

The movie took 16 years to materialize because the filmmakers wanted to “get it right.” Netflix went so far as to shoot at the exact location where Bonnie and Clyde were gunned down.

“Only since the Titanic have I walked on a set where I felt like I truly went back in time,” Bates told Variety on the SXSW red carpet.

Whether traditional filmmakers accept it or not, The Highwaymen bolsters the idea that Netflix is a legitimate player when it comes to original filmmaking. The streaming giant is here to stay, and it seems to be coming for all the awards in 2020.