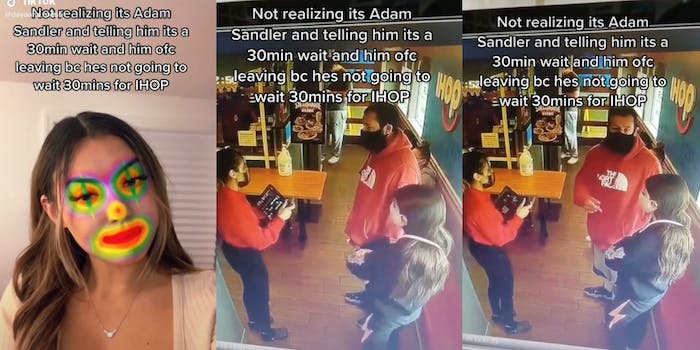 ‘You did the right thing’: IHOP worker turns away Adam Sandler in viral TikTok—and viewers support her decision

Viewers are also praising how Sandler handled the situation.

An IHOP employee is expressing shock after learning that she unknowingly caused Adam Sandler to leave the restaurant after telling the Hollywood megastar that he would have to wait for a table.

In a video posted to TikTok on Monday, user Dayanna Rodas shared surveillance footage of the moment she turned away Sandler and a young woman believed to be his daughter.

Rodas says she informed the famed actor, who she didn’t recognize at the time, that he would have to wait 30 minutes for a table. Sandler is seen leaving the restaurant moments later.

“Pleaseee come back,” Rodas said in a caption on the video.

Rodas’ clip has been viewed more than 8 million times since being posted on Monday, and it is being inundated with comments from other users.

Instead of chastising Rodas for turning away the beloved celebrity, however, TikTok users are applauding her for not giving Sandler preferential treatment.

“I would lose respect for the restaurant that lets a celebrity go before everyone else who were waiting in line though,” user Mitz Tiang said. “You did the right thing.”

But it isn’t just Rodas receiving praise. Users are also celebrating the fact that Sandler, whose estimated net worth is around a staggering $420 million, did not use his fame to cut the line.

“The fact he could have said ‘I’m Adam Sandler’ and didn’t is amazing,” another user added. “Most celebrities would use their status to get them places.”

Users are also noting the relaxed attire of Sandler, who is known for wearing clothes like basketball shorts and sweatshirts regardless of the occasion.

“He dresses like’s he’s always ready to hoop and I respect him for that,” @Mndiaye_97 said.

Others who claimed to have served Sandler are arguing that the film star is known for being kind and humble.

Another user on Reddit made similar claims regarding Sandler’s demeanor.

“He lives in my neighborhood and frequents one of the restaurants I do and he’s very down to earth,” the user wrote. “Doubt he was mad he didn’t get preferential treatment, he’s always so chill.”