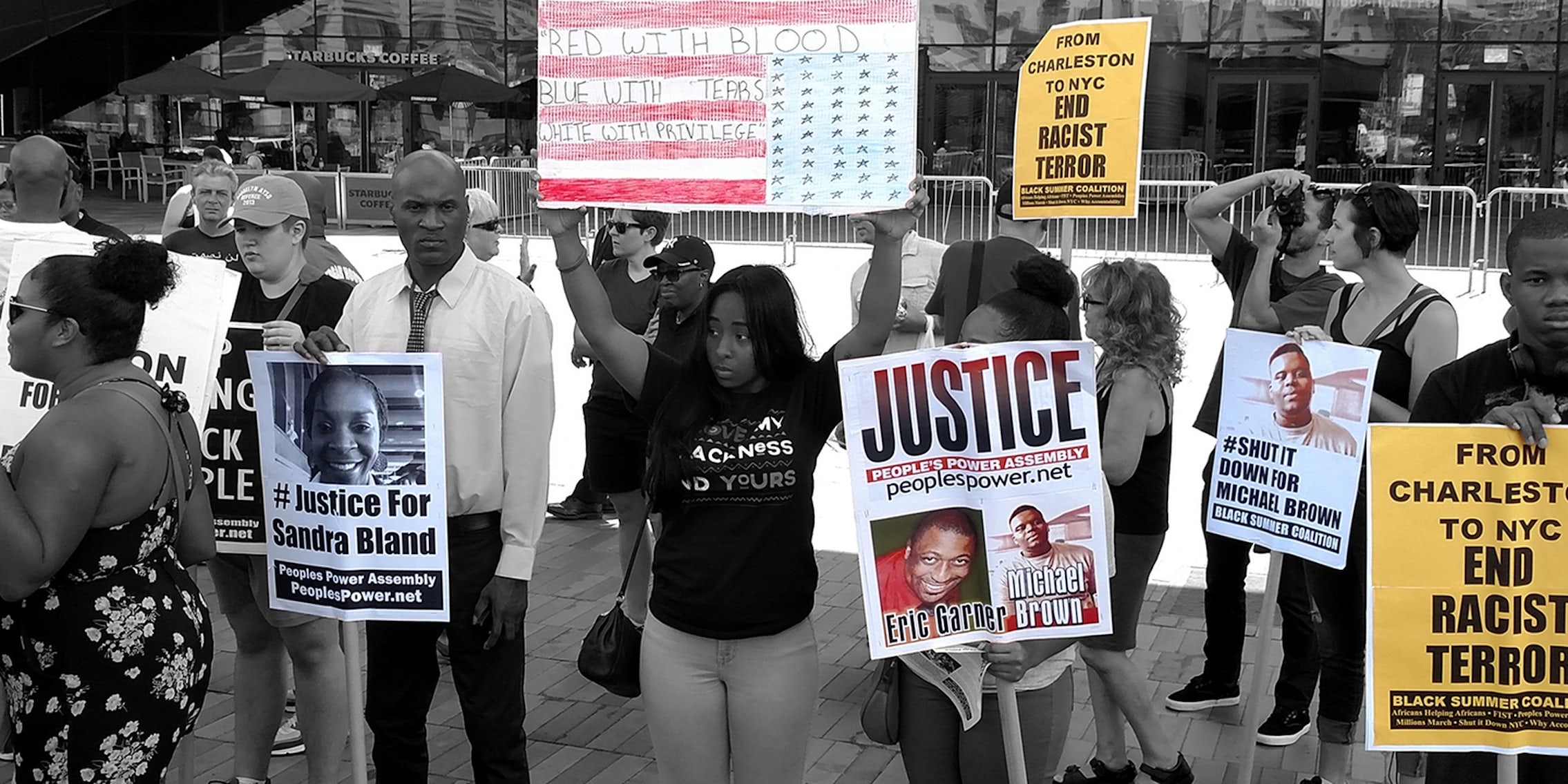 Social justice issues dominated the year, from race to sexual identity and beyond.

Although the term “social justice warrior” was constructed as an insult against progressive activists, the year 2015 has amply demonstrated why liberals should embrace the term. Social justice issues dominated the year, from race to sexual identity and beyond. Here are five ways the United States grappled with with social issues in 2015:

1. Same-sex marriage was legalized throughout America

Sixty-one years ago, the Supreme Court’s ruling in Brown v. Board of Education declared that racial segregation in public schools was unconstitutional. As a result of that decision, the year 1954 is often regarded as a milestone in the history of the civil rights movement for African-Americans.

Sixty-one years from now, the same thing will almost certainly be said of Obergefell v. Hodges, in which our nation’s highest bench ruled that the Constitution guarantees a fundamental right to marry for same-sex couples. While attention will be rightly paid to the five jurists who ruled in favor of Obergefell (and particularly Anthony Kennedy’s powerful brief on behalf of the majority), it’s important not to overlook the decades of activist struggling that made this historic moment possible.

“The LGBT community has always been an early adopter of Internet and the opportunities it presented for personal and professional activism,” explained Pam Spaulding sin an op-ed for the Huffington Post. “In fact, it was a necessity for a slice of the American public faced with few legal rights that faced hostility and violence just for being who they were.”

Because of online social justice activists, the gay community was able to mobilize its supporters and exert pressure on political leaders with unprecedented efficiency. British activist Benjamin Cohen perhaps summed it up best in The Guardian when he observed that the LGBT community’s success in U.K. politics “was a real demonstration of the power of the internet to bring the electorate and the political elite together.”

2. Transgender issues were brought to the fore of our cultural consciousness

Without question, Caitlyn Jenner’s decision to come out as transgender took the Internet by storm. In addition to trending on social media, Jenner broke the Guinness World Record for fastest Twitter account to reach one million followers and was soon regarded as the most prominent transgender celebrity in modern history.

Beneath the media furor surrounding Jenner, however, there has been a substantive dialogue about the struggles facing ordinary transgendered people every day.

“Transgender teens and adults say they routinely endure discrimination in employment, housing, access to public bathrooms, and government willingness to acknowledge their gender status in official documents,” writes the Retro Report in an interview for Medical Daily. “While momentum may now be on the upswing, the movement that began almost half a century ago still has a lot of obstacles to overcome.”

These problems can’t be fixed in a year, but as the Internet continues to rally behind positive cultural depictions of transgendered individuals (the TV show “Transparent” comes to mind), one can hope that 2015 will at least be seen as a major turning point for transgendered Americans.

In many ways, the rise of Internet feminism is simply the next logical step for a movement that has always evolved with modern culture.

“The 1910s saw suffragettes using militant tactics propositioning their power to win votes, in the 60s and 70s feminism was radicalized to further include women of color and minorities, and the 90s saw ‘riot grrrl’s come up from underground to wage war on unsolved sexist dilemmas,” writes Lydia Morrish of Konbini, “Now there’s a digital anti-patriarchy army forming, creating safe havens where artists, writers, photographers, poets and, yes, feminists, are reworking the narrative for women’s rights. With added emojis.”

Although Internet feminists have already transformed our public dialogue—from focusing on the subtle undercurrents of rape culture to holding politicians accountable for sexist statements – their greatest achievement yet may actually occur next year. As Democratic presidential candidate and former Secretary of State Hillary Clinton continues her historic campaign for the presidency, commentators have already noticed her willingness to play the so-called “gender card” when faced with sexism.

“It’s a well-noted dramatic turn from her 2008 campaign, where Clinton famously tried to downplay the gender issue,” observed Amanda Marcotte of Salon. “Clearly, she’s learned that doesn’t work—as the Benghazi hearings show, Republicans will never stop harping on ugly stereotypes of women as weak and mendacious—so instead her campaign is turning her gender and her feminism into a strength.”

Considering that Clinton is the clear frontrunner for the Democratic nomination, it is entirely possible that the Internet feminists whom Clinton has embraced will ultimately be remembered for producing America’s first female president.

4. #BlackLivesMatter reinvigorated the civil rights movement in the light of a series of terrible tragedies

“In 2015, Black Lives Matter blossomed from a protest cry into a genuine political force,” noted Time magazine in its encapsulation of the movement’s achievements this year. “Groups that embraced the slogan hounded police chiefs from their jobs, won landmark prosecutions and turned college campuses into cauldrons of social ferment.”

All of this is true, but it’s important to understand precisely why it is true. After all, racial profiling by law enforcement has been a major problem long before the #BlackLivesMatter movement rose up to protest it. Over the past twelve months, however, civil rights protesters have developed an unprecedented degree of sophistication in utilizing social media to draw attention to their struggles.

“The thing about [Martin Luther] King or Ella Baker is that they could not just wake up and sit at the breakfast table and talk to a million people,” explained activist DeRay Mckesson in an interview with Wired. “The tools that we have to organize and to resist are fundamentally different than anything that’s existed before in black struggle.”

This has been evident in virtually every major #BlackLivesMatter movement this year, from the protests over the execution of Freddie Gray to the campaign for Chicago Mayor Rahm Emanuel to resign due to his role in covering up Chicago Police Department abuses.

5. As ISIS and other Islamic terrorist organizations threaten the world, advocates of religious equality have been fighting Islamophobia at home

Earlier this week, left-wing activist filmmaker Michael Moore created the #WeAreAllMuslim hashtag to protest GOP presidential hopeful Donald Trump’s recent proposals to register Muslim Americans and ban all Muslim immigrants from entering the country. If you had any doubt that such a hashtag was necessary, bear in mind that shortly after the terrorist shootings at San Bernardino, “Muslim Killers” also began to trend on Twitter.

Moore is hardly alone in his determination to fight anti-Muslim prejudice.

Benjamin Wittes of the Brookings Institution created #MuslimAmericanFaces, which told the stories of ordinary Muslims to counter the misperceptions that had been perpetuated by groups like ISIS; a Libyan-American Muslim woman named Hend Amry concocted #HowToStopAMuslimPresident as a way of ridiculing Ben Carson’s Islamophobic statements; and podcasters Zahra Noorbakhsh and Tanzila “Taz” Ahmed came up with #GoodMuslimBadMuslim (also the name of their show) in order to confront the stereotypes and social pressures that are used to determine what separates a “good” Muslim individual from a “bad” one. In addition to fighting Islamophobia, these efforts may very well also assist us in disempowering terrorists who, after all, want nothing more than the West to brand all Muslims as enemies.

It’s important to remember that, despite the this progress, activists still have a long way to go. Homophobia, transphobia, misogyny, racism, and Islamophobia aren’t going to leave us any time soon, and as long as they linger in our cultural milieu, discrimination and oppression against those groups will continue to happen.

That said, 2015 was the year when progressive movements on behalf of the marginalized seemed to reach a critical mass and, in the process, change how we discuss these sensitive issues. If this doesn’t earn them the right to a title as cool as “social justice warrior,” then I don’t know what would.

Image via The All-Nite Images / Flickr (CC by 2.0) | Remix by Max Fleishman