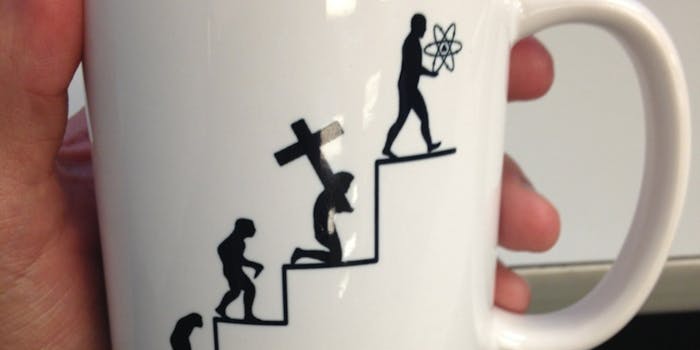 How Reddit’s atheists lost faith in their former top moderator

r/Atheism excommunicated its top mod, Skeen, after a long period of unrest and inaction.

Subscribers to r/atheism rally around the idea that God does not exist and should thus be removed from people’s lives. So, when the default subreddit’s top mod himself appeared to no longer be in existence, he too was removed.

u/skeen, a redditor since 2006, was the creator and top moderator of r/atheism. As Reddit’s popularity grew, r/atheism’s numbers also increased. Today, the community is one of the site’s default subreddits, boasting over 2 million subscribers, and is a constant source of drama and controversy. His removal came after an extended period of inactivity on Reddit; his last post on the site was on August 10, 2012.

With the news comes the revelation that skeen was not well-liked within the r/atheism community. He took a “hands off” approach to moderatorship and took moderating duties very lightly. But, according to tuber, who is now r/atheism’s top mod, skeen would remove any mods who did not run the subreddit in accordance with this light approach.

“For what it’s worth, mods who didn’t toe the line were removed by u/skeen. Both u/juliebeen and u/MercurialMadnessMan, once mods of r/atheism, were axed in that way,” tuber explained. “It’s reasonable to expect some changes to be introduced soon. Not necessarily huge changes.”

Redditors’ own reactions to the new hierarchy were mixed.

“Congratulations /r/atheism, this is one of the first good steps I’ve seen for this subreddit in a while!” redditor twentyone_21 said.

“On one hand this can be good for /r/atheism because maybe the purge of theists will finally start to happen and reverse the downward decline of /r/atheism‘s population. On the other hand, this is essentially a coup and borderline fascist. Who knows if criticism of religions will be allowed anymore. Will this new top mod back down on letting us atheists participate in draw Mohammed day? These are all very important things to think about,” redditor Carl_Jones commented.

So far, theistic redditors have not come forward to boast, “Where is your skeen now?”