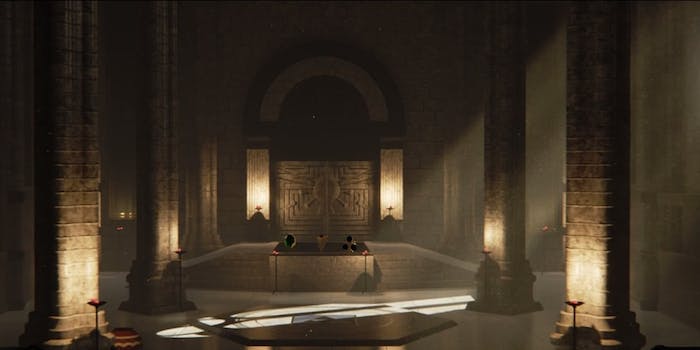 Animator Michael Eurek's vision of the temple captures every detail, from flickering lights to cold stone.

The latest reconstruction of a key Legend of Zelda location is literally unreal.

Animator Michael Eurek took to Vimeo to show off his rendering of the Temple of Time, first seen in Nintendo 64’s The Legend of Zelda: Ocarina of Time, using the development software Unreal Engine 4. Eurek’s vision of the temple is nothing short of breathtaking, from the flickering lights bouncing off of the cold, stone walls to the awe-inspiring Master Sword itself.

Temple of Time from Michael Eurek on Vimeo.

Eurek’s choice of the heavy-duty software to imagine what Link saw before him is quite appropriate, seeing as how Ocarina of Time was the first entry into the Legend of Zelda franchise that allowed players to see a first-person perspective of Hyrule.

Unfortunately, so far only the Temple of Time has been rendered. It would be amazing to see—and, more importantly, play in—other areas of Hyrule. Picture what Death Mountain would look like in Unreal Engine 4. How about Castle Town?