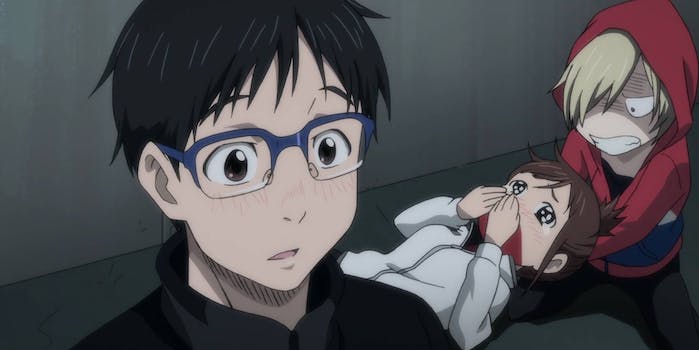 IMDb’s parental warnings for ‘Yuri on Ice’ are completely ridiculous

'A man applies chapstick to another man's lips while others watch.' Thanks for the warning, IMDb!

Picture the scene: You’re home alone with a few hours to spare, thinking about watching that figure skating anime everyone’s talking about, Yuri on Ice. But first, you need to make sure it’s not too racy.

Yes, it’s time to check IMDb‘s parental guidance page, which comes with a stark warning for Yuri on Ice: “A man applies chapstick to another man’s lips while others watch.” Thank god you were warned in time!

Like Wikipedia, IMDb’s information is supplied by the site’s users. This means the more subjective sections are influenced by the biases of those users—hence the comically detailed warnings for Yuri on Ice, a heartwarming sports anime with a handful of PG-13 sex jokes and a love story between its two male leads.

While parental warnings are often useful when checking for triggering or adult-rated content, Yuri on Ice‘s page is an unintentionally hilarious parody of un-self-aware homophobia, meticulously cataloging the content of male/male romance scenes. (Would anyone seriously warn for romantic face-touching between a man and a woman? Come on.) It’s easy to imagine someone taking copious notes on all 12 episodes and coming up with stuff like this: