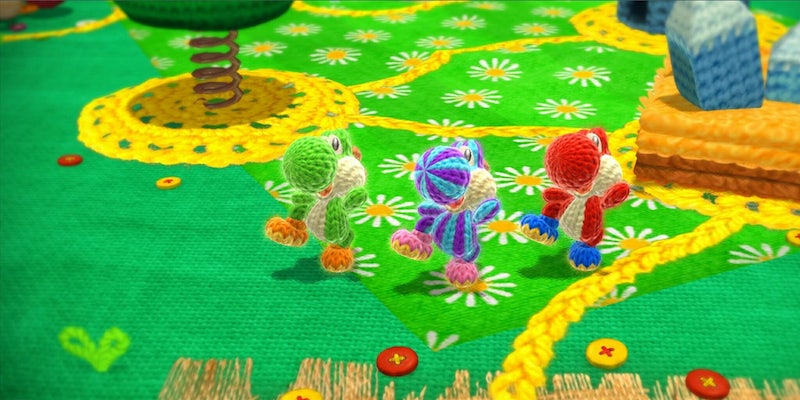 A crocheted Yoshi in a crocheted world makes for a charming adventure.

Yoshi’s Wooly World is like eating icing with a spoon. It’s so sweet that it’ll make your teeth hurt.

Super Mario World 2: Yoshi’s Island in 1995 on the SNES was the first game that gave Yoshi a starring role. The series continued with Yoshi’s Story on the Nintendo 64, Yoshi Touch & Go on the Nintendo DS, and Yoshi’s New Island on the 3DS. Yoshi’s Wooly World draws from the collective heritage of all these games. This was my first Yoshi game, however, so I walked in fresh to the series.

It is also an homage to amigurumi, knit or crocheted yarn characters, that strive to be exceedingly cute. It’s a popular hobby in Japan, that’s beginning to catch on in the United States. Yoshi’s Wooly World serves as amigurumi homage because almost every character in the game looks like it was crocheted.

The levels are composed of plush, sewn pillows that are dotted with spools and buttons. Enemies carry crochet hooks as if they were pikes. The aesthetic is adorable. 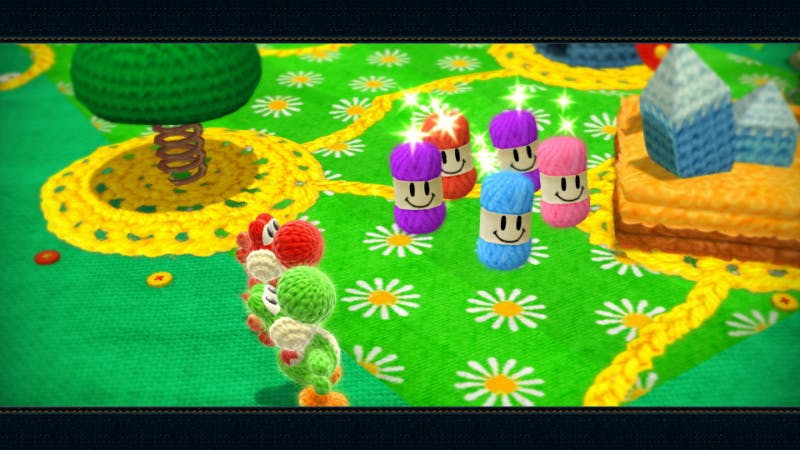 The Yoshi Clan live on Craft Island. Kamek, the villain of Yoshi’s Island, decides that he wants some yarn, and what better way to get it than by unraveling the members of the Yoshi Clan. Kamek turns them into skeins of yarn, which the Yoshis who managed to hide from Kamek then have to recover.

The Yoshi games are spiritual extensions of the Super Mario Bros. series, and so both the overall structure of Yoshi’s Wooly World and the course designs and enemies will be familiar to Mario fans. The game is divided into five Worlds, each with eight courses. The Worlds follow overall themes like a crafting table, or the desert, or a candyland. The fourth course is always a mini-castle with a miniboss. The eighth course is always a large castle with a big boss.

You’ll find many varieties of Shy Guys, Monty Moles, Cheep Cheeps, and Chomps, all of whom are amigurumi. Piranha plants, on the other hand, are plush dolls. There are POW switches and donut blocks. If you enjoy Super Mario Bros. games, you’ll feel right at home in Yoshi’s Wooly World.

This also means that Yoshi’s Wooly World can be a punishing platformer. It fortunately supports the entire range of possible Wii U control setups, so you can select whatever you’re most comfortable with: the Wii U GamePad, Wii U Pro Controller, Wii Remote and Classic Controller Pro combination, or the Wii Remote. 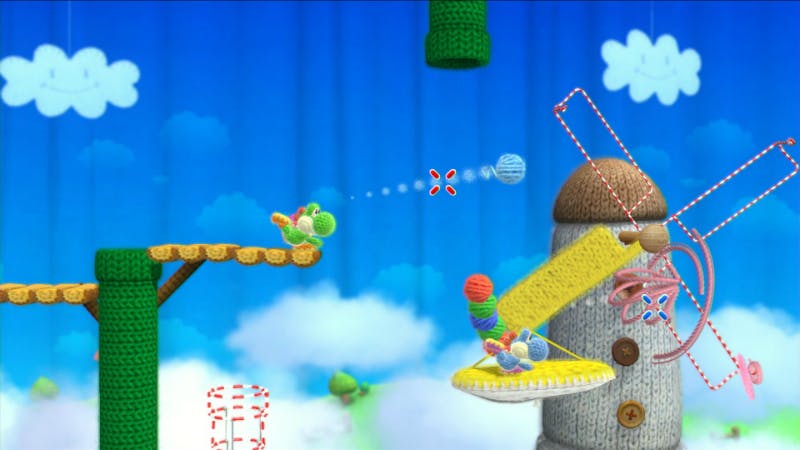 One of the elements that differentiates the Yoshi games from their Super Mario Bros. cousins is Yoshi’s ability to throw objects, in this case balls of yarn. Up to six balls of yarn at a time will follow Yoshi through the level. Yoshi can use them to kill enemies, activate Winged Clouds (similar to Question blocks in Mario games), and to create platforms.

Yoshi can get the balls of yarn from yarn baskets that hang in the air like blocks in Super Mario Bros. games. He can also grab enemies with his tongue, eat them, and then “lay” balls of yarn like eggs. Yoshi can use his tongue to grab bows of yarn on walls too, and then unravel parts of the level to uncover secret areas or remove obstacles.

Where Super Mario Bros. games have gold coins, Yoshi’s Wooly World has craft beads to collect. The beads can be spent on Power Badges—power-ups that last through the whole level—no matter how many times Yoshi dies. One of the basic and cheap Power Badges makes all of the balls of yarn generated in the level into extra-large balls of yarn. That makes it easier for Yoshi to hit targets.

Some levels include sponges that Yoshi can either break with his head, or shoot yarn balls through. Using the Power Badge helps tremendously with breaking through barriers like these. 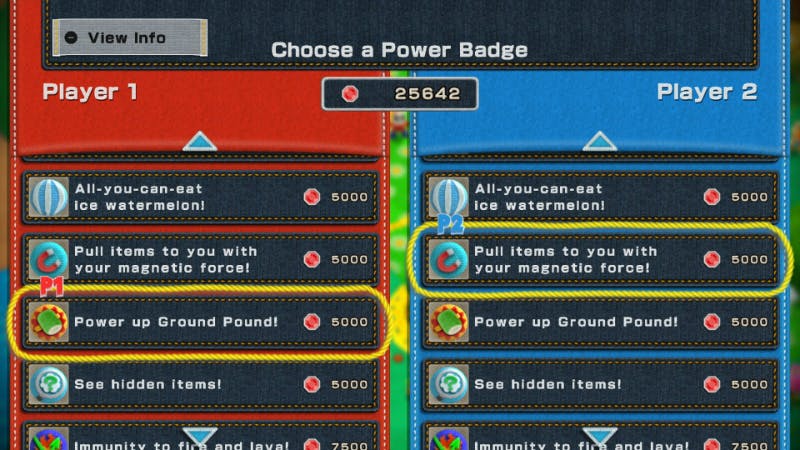 Another simple Power Badge allows Yoshi to tackle the level with the help of an amigurumi named Poochy, who can block enemies from approaching Yoshi, or let Yoshi ride on his back and jump into the air to help reach platforms.

More expensive Power Badges do things like make Yoshi immune to fire, or make him bounce right out of any pits he falls into. Depending on the level in question, using these Power Badges can make it very difficult to fail. In fact, failing is not really part of Yoshi’s Wooly World’s formula. Lives are unlimited, with no need to ever exit from a course until it’s finished.

If you activate “Mellow mode” Yoshi is given wings such that if you hold down the jump button he flies in a horizontal line—meaning he can fly over pits with no fear of falling. You can also take more damage from enemies than normal when you enter Mellow mode, and if you keep failing the course an “invincibility egg” will appear and give you temporary invulnerability.

If you are playing in Mellow mode, you can also spend beads to bypass any level entirely. You can switch back and forth between Normal mode and Mellow mode any time as long as you’re outside of a course. 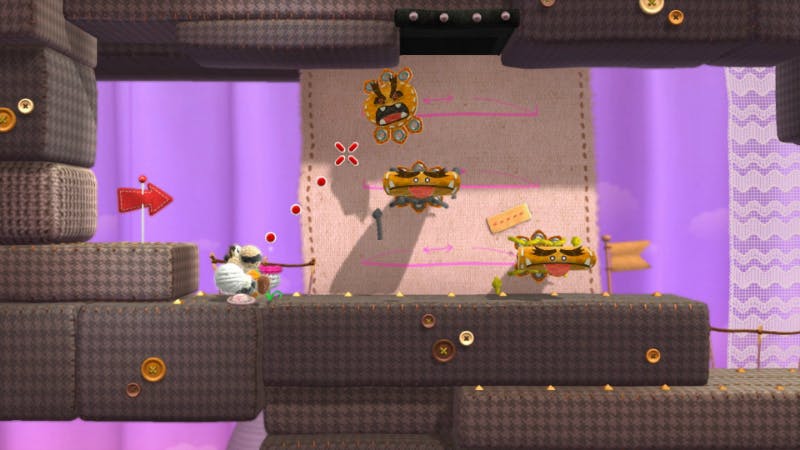 If you want to play with a friend you can try Yoshi’s Wooly World in co-op mode. Doing so means you always have at least one yarn ball available, as one Yoshi can swallow and hold the other. You can then spit your partner out at enemies, or spit them across gaps, and if you get separated one of the two players’ Yoshis will turn into an egg with wings, and fly to catch up with the other, who has to break the egg to reunite the pair.

You can also have a double Yoshi by using a Yoshi amiibo. Nintendo provided us with a copy of the game that came packaged with the Green Yarn Yoshi, and unlike most plastic amiibo figurines, Green Yarn Yoshi is a plush yarn amigurumi. Other amiibo we tried unlocked costumes for Yoshi.

The soundtrack to Yoshi’s Wooly World is fantastic. There are tracks that sound like easy jazz, funk selections complete with slap bass, the desert levels have a country western twang, and one of the organ-heavy compositions sounded like something out of a Charlie Brown cartoon. The variety of the songs was a surprise, and all of them were enjoyable.

There are plenty of collectibles within each course to warrant going back through, after your first completion. If you collect all five yarn skeins called “Wonder Wools” in each level you can knit one of the unraveled Yoshis back together, which effectively means having another color of costume available. 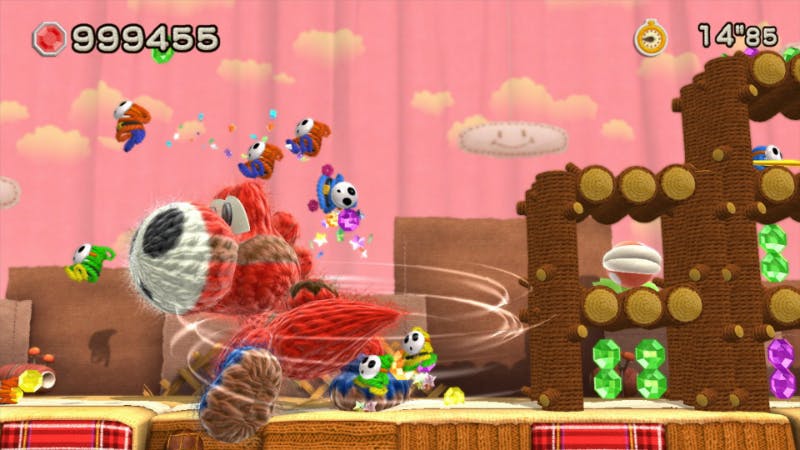 There are also Smiley Flowers to collect. The more of them you grab in a course the more likely you are to receive a bonus level when you finish the course. The bonus levels are built around specific mechanics like turning into a giant Yoshi and smashing through the level, or turning into a Yoshi umbrella and floating around to collect beads.

The only caution about Yoshi’s Wooly World is that it is only composed of five Worlds, rather than the usual eight Worlds of a Super Mario Bros. game. A skilled platformer player who is able to grab all the collectibles in each course on a first run might find the game too short.

Other than this potential flaw, I can’t think of any shortcomings (though it should be repeated that this is my first Yoshi game, so any repetitiveness from previous installations isn’t accounted for). Yoshi’s Wooly World is a challenging yet accessible platformer that weaves a venerable Nintendo icon into a fresh aesthetic.

Disclosure: Our review copy of Yoshi’s Wooly World on Wii U was provided courtesy of Nintendo.