Who are these Guardians of the Galaxy anyway?

Unfamiliar with Guardians of the Galaxy? Don’t sweat it.

If you’re not really clear on who the Guardians of the Galaxy are, don’t sweat it.

Even among comic book fans, the Guardians have never really been heavy hitters. Marvel Studios is just banking on its own ability to get audiences interested in a fun summer action movie, regardless of whether people have heard of the main characters or not. You know, kind of like marketing an original idea.

It’s difficult to believe now, but before the first Iron Man movie came out in 2008, Tony Stark wasn’t exactly a big-name superhero either. Sure, he was familiar to fans of Avengers comics, but he didn’t have the same mainstream name recognition as Batman or Superman. Robert Downey, Jr., put him on the map, and then Marvel Studios went on to build up a series of even less likely successes, including the decision to sink a ton of money into Thor (i.e. a Norse god family drama starring a pair of unknown actors), and making Captain America popular in Europe and Asia.

In theory, Marvel will do the same for the Guardians of the Galaxy, a team of sci-fi antiheroes who combine Star Wars with Ocean’s Eleven.

So, who are these guys?

GotG is technically a superhero comic, but it doesn’t bear much resemblance to team-ups like the Avengers or X-Men. Most of the movie will take place in space, the main characters are all assholes or criminals, and they’re reluctant allies rather than the “save the cheerleader and save the world” kind of heroes.

The movie takes the “inspired by” route rather than being a direct adaptation of specific comic book storylines, kind of like how Thor made Jane Foster an astrophysicist instead of a doctor, and Captain America made Bucky an adult instead of a teen sidekick. So even if you are familiar with GotG comics, it shouldn’t make much difference to the film’s entertainment value. 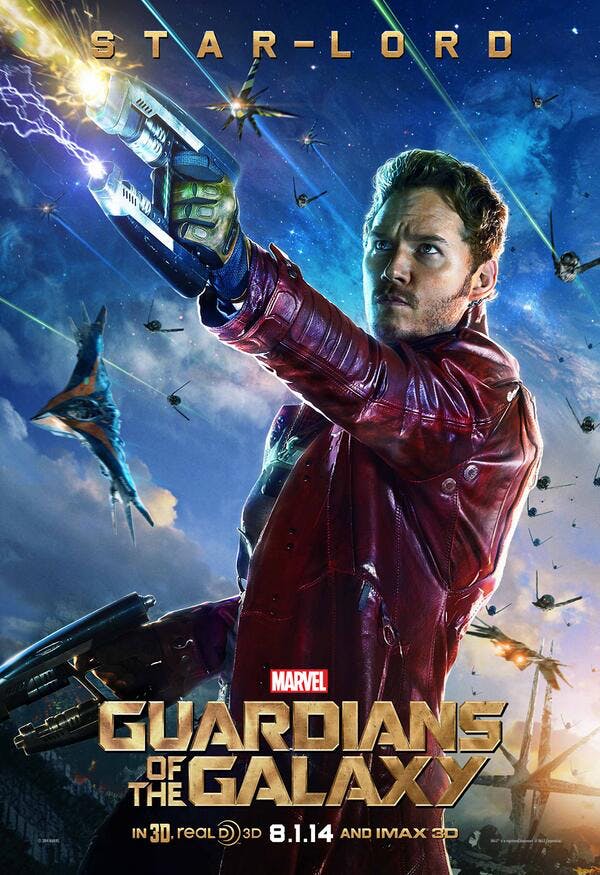 The lead character is Peter Quill, A.K.A. Star-Lord. If the trailers are anything to go by, then other characters will definitely be acknowledging how ridiculous it is to refer to yourself as Star-Lord. There’s also at least one meta-joke about how no one actually knows who the Guardians of the Galaxy are.

Peter Quill is a (mostly) human pilot who originally hails from Earth, but was abducted by aliens as a child. One of the few things he kept from his home planet is a cassette tape player full of 1970s and ‘80s music, which explains why the GotG trailers are full of songs like “Hooked on a Feeling.” Expect lots of incongruously cheesy pop music on this movie’s soundtrack, basically.

Casting Chris Pratt as Star-Lord sends a pretty strong message about what kind of movie this is going to be.

Over the past few years he’s had supporting roles in movies like Moneyball and Zero Dark Thirty, but he’s still best known for his work in comedy, especially Parks and Rec. GotG is clearly aiming for an action-comedy tone that skews even more towards comedy than Thor or Iron Man, with Star-Lord coming across as more than a little Indiana Jones-ish. This will be Chris Pratt’s ticket to the big leagues, soon to be followed by a leading role in Jurassic World next year. 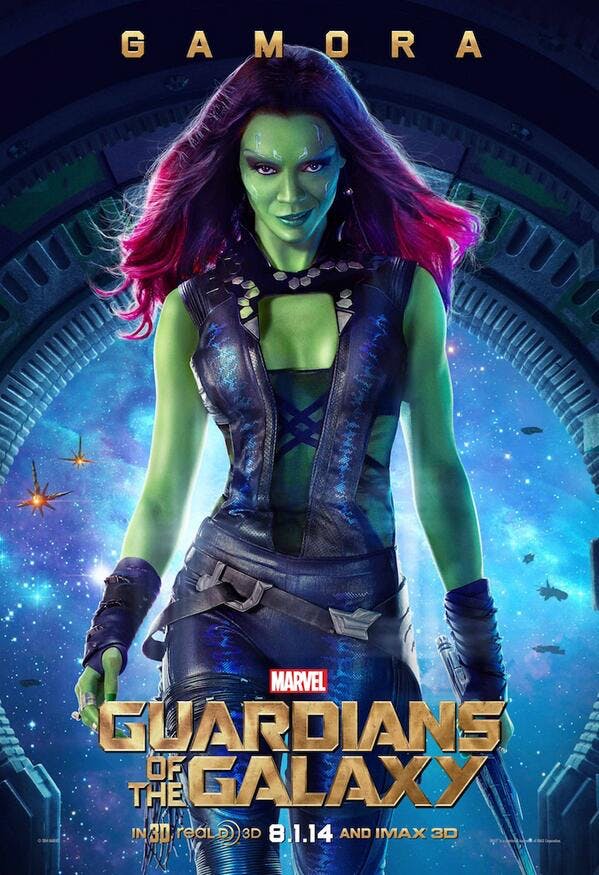 GotG is Zoe Saldana’s third big-budget sci-fi movie, following on from Star Trek and Avatar. As a terrifying assassin with a dark past, her character Gamora will inevitably invite comparisons with Black Widow. She was raised by the supervillain Thanos (the alien we see in the post-credits scene of Avengers), alongside Karen Gillan’s character Nebula.

Nebula stuck around to become the lieutenant of the main bad guy in this movie, Ronan (Lee Pace), while Gamora became one of the good guys. If you feel the need to play stupid interview bingo during the GotG press tour, look no further than the zillions of pointless questions Karen Gillan is already being asked about what it was like to shave her head to play Nebula.

Gamora and Nebula may wind up having one of the most interesting relationships in the movie, so Marvel have released a single-issue Nebula/Gamora backstory comic as a kind of prequel. This is already one more major female character than many superhero movies manage, and with any luck Gamora won’t wind up as someone’s love-interest. One of the trailers shows her and Star-Lord leaning in for a kiss, but we suspect that’s a fake-out.

(The GotG cast also includes Glenn Close as the chief of the space police, along with a handful of more minor female characters. This movie is definitely gonna pass the Bechdel Test, at least.) 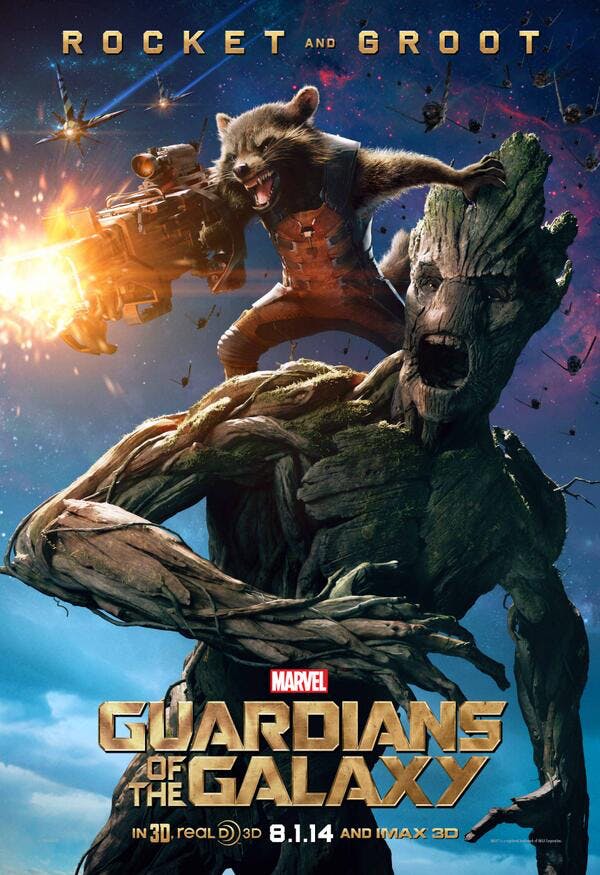 Yes, two of the main characters in GotG are a raccoon and a tree.

Marvel is evidently trying to make it very clear that neither of these guys are Jar Jar Binks-esque comedy sidekicks. Chris Pratt described Rocket Raccoon as a “tragic” character, while Vin Diesel said that voicing Groot (the tree) helped him come to terms with the death of his friend and Fast and Furious co-star Paul Walker.

Groot is the one genuinely nice person on the team, described by Vin Diesel as the only character who doesn’t start the movie as “a bastard.” He’s so sweet that the trailer shows him handing out flowers to kids, but he obviously has a more badass side because he’s Rocket Raccoon’s partner in crime.

Groot’s catchphrase is “I am Groot,” and by “catchphrase” we mean that this is literally the only thing he can say. So for this role, Vin Diesel was essentially hired to say “I am Groot” in as many different ways as humanly possible. This concept is so weirdly fascinating that it’s won us over already.

Voiced by Bradley Cooper, Rocket Raccoon is the weirdest character Marvel Studios has introduced so far. He’s a talking alien raccoon whose best friend is an alien tree, and Chris Pratt describes him as the heart of the movie, with “a sense of loneliness and inner pain.” According to GotG director James Gunn, “It’s not Bugs Bunny in the middle of The Avengers, it’s a real, little, somewhat mangled beast that’s alone.” Rocket and Groot are meant to be just as important as their more humanoid teammates, although for obvious reasons Groot will be a little limited in the dialogue department.

The final Guardian of the Galaxy is Drax the Destroyer, a warrior whose family were murdered by Ronan, the villain who pursues the Guardians throughout this film. He’s being played by professional wrestler Dave Bautista, and will likely be GotG’s most traditional action hero.

Wait, how does this fit in with the Avengers?

While GotG is going for a space opera vibe, it still takes place in the same universe as the Avengers franchise. Actually, it’s likely that some of these characters will show up in Avengers 3, although this depends on whether that movie will be about Thanos, Civil War, or something else entirely.

The Marvel Cinematic Universe is planned out in such a way that nobody shows up for no reason. Every character and storyline ties into the others in some way, and GotG’s most significant impact is that it’s Marvel’s first serious foray into alien planets.

Sure, Thor and Loki are technically aliens, but Guardians of the Galaxy is straight-up in the vein of Star Wars. This movie takes place lightyears away from the more traditional superhero stories of Iron Man and Captain America, and will introduce a wider universe of alien races to the Marvel Cinematic Universe—most importantly, the Kree and Skrulls. These two alien species have a huge part to play in Marvel comics, but have so far only been teased in the form of a mysterious subplot in Agents of S.H.I.E.L.D.

The overall tone of GotG is already being compared to 1980s sci-fi and action comedies like Back to the Future and Indiana Jones, particularly given Star-Lord’s attachment to his earthbound childhood.

This fits in with the Marvel Studios model of having each separate strand of the Mavel Cinematic Universe have its own distinct tone, from Captain America’s emotionally intense war films to Thor’s Shakespearean fantasy epics. They’re all basically action-comedy blockbusters, but each franchise has a different mood and aesthetic. GotG’s image is very retro and colorful, even when it comes to simple stuff like their fun poster designs.

When GotG was first announced, the reaction from its target audience was dubious to say the least. Without a recognizable name like Ant-Man’s (former) writer/director Edgar Wright attached to the project, it seemed like a very odd choice to follow characters like Iron Man and Thor. Two years on, the buzz is so positive that this weird movie franchise may wind up in direct competition with the Star Wars sequels.

Whether or not Guardians of the Galaxy actually turns out to be good, it’s already a success story for Marvel’s publicity juggernaut. It’s also an additional point of annoyance for DC fans who are still hoping in vain for a DC adaptation that embraces the spirit of superhero comics.

The past decade of Batman and Superman movies have all done well at the box office, but they’re all pretty conservative adaptations: Retelling origin stories in the much-maligned “gritty realist” style, with an underlying sense that the filmmakers are slightly embarrassed by the sillier aspects of superhero fiction. Meanwhile Marvel has managed to get adult audiences excited about a movie where two of the main characters are a tree and a raccoon, in the same year that DC/Warner Bros. announced their most ambitious move to date: an Avengers-style Justice League movie, scheduled for 2018.

Comic book nerds have been hoping for a Justice League movie for more or less forever, while the original audience for a Guardians of the Galaxy adaptation was probably about three and a half people. And yet, here we are. Humming along to “Hooked on a Feeling” for the hundredth time. Go figure.