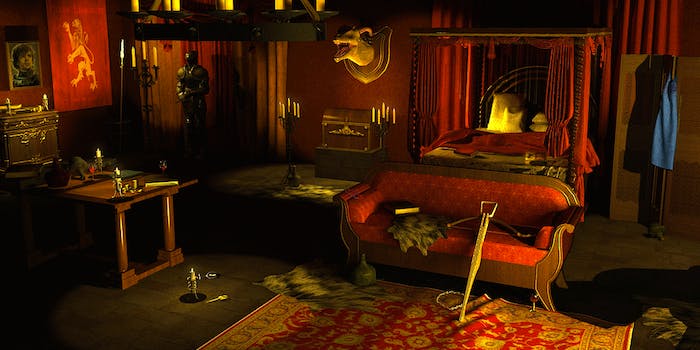 A Lannister always pays his debts, but he’ll also probably shell out if it means having one of the sickest pads in Westeros.

We’ve seen hints of Tyrion Lannister’s rooms in King’s Landing as Hand of the King and later when he’s demoted during Game of Thrones, but we haven’t really appreciated the space itself, which more often focused on Tyrion and Shae, an appearance from Varys, or when Sansa was in there on their wedding night. But a man as particular and thoughtful as Tyrion must have put some work into the place he calls home.

Sebastian Bos, a digital marketing executive at U.K.-based RocketMill, created an interactive, virtual version of Tyrion’s room filled with plenty of trinkets from his journey over the past few years.

Looking like it could double as the Gryffindor Common Room, it’s splashed with the Lannister red and gold, plenty of house pride, and smaller Easter eggs. Tyrion is a well-read man, for example, and hints of his love for books are strewn throughout.

Bos and the RocketMill design team noticed that Tyrion is one of the most popular characters and wanted to keep the buzz going after the show ended. He knows all too well what often happens to our favorites on the show.

“We were also afraid Tyrion will get killed off like so many other of our favorite characters did,” Bos told the Daily Dot in an email. “We wanted to have something to remember him by. He’s, as many, in such turmoil at the moment and we miss the early seasons where Tyrion was enjoying a better life which we believe he deserves!”

Last month he started to reach out to fans of the show online (including Reddit’s r/gameofthrones) to see what items should be in the room, because he wanted to bring fans into the creative process. After all, who would know about Tyrion’s mementos and treasures better than the fans themselves?

And people had plenty of opinions about it—especially on the two most popular requests for the room.

“One thing we quickly learned was how quickly people acknowledged that women and wine played a large role,” he said. “But we also had some great answers where people showed the deeper meanings to what each item meant. I think the comment about Shae was a great example of that.” 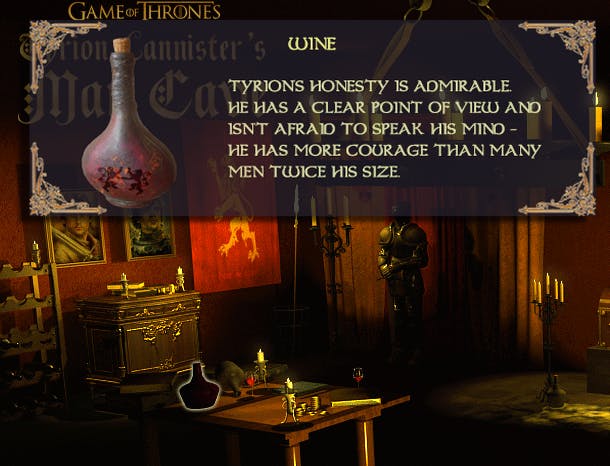 You can hover over some of the items in Tyrion’s room to learn more about them—each has its own history and tie to the books and show. But some of the items gathered in the room would’ve been impossible for Tyrion to collect after his arrest and eventual fleeing of King’s Landing. We’d like to think that maybe his brother Jaime got weirdly sentimental after he left, but Bos has a simpler answer.

“I think what we want people to realise is that this [is] of course a conceptual piece and some of the items included are [gone], like you say once he had fled King’s Landing. We wanted this man cave to paint a picture of how Tyrion’s role developed over the seasons,” he said. “Naturally having the weapon he used to kill Tywin lying on the sofa wouldn’t be the wisest of moves. Especially for someone as smart as Tyrion as well.”

Bos hopes that his team will be able to make something even bigger and more interactive next time, which could come in the form of Obi Wan Kenobi’s room for the release of The Force Awakens. He’s always open to other ideas, too.

We can only imagine (and shudder) at what some other rooms of Westeros would look like. 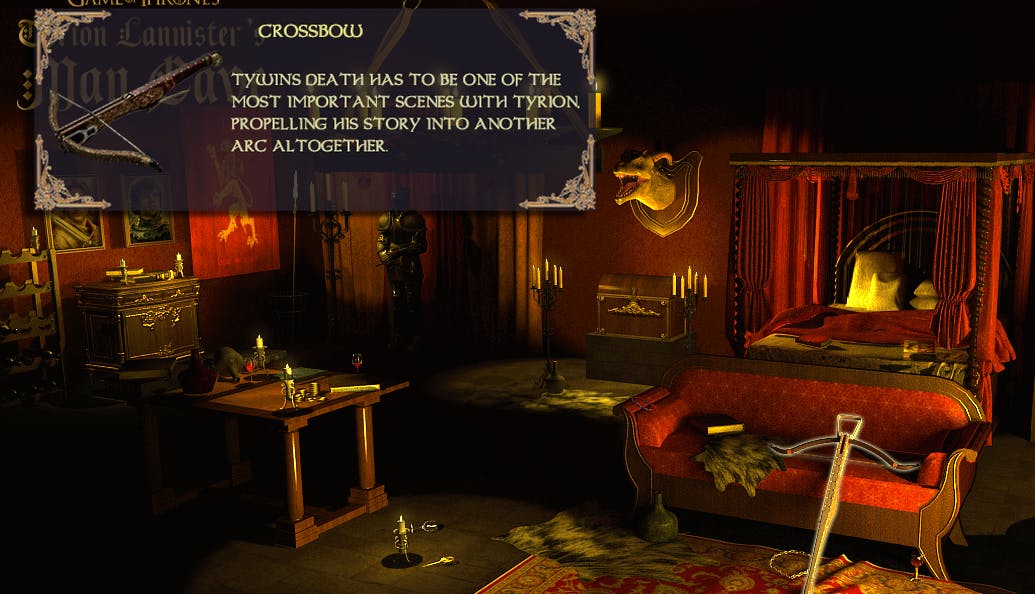