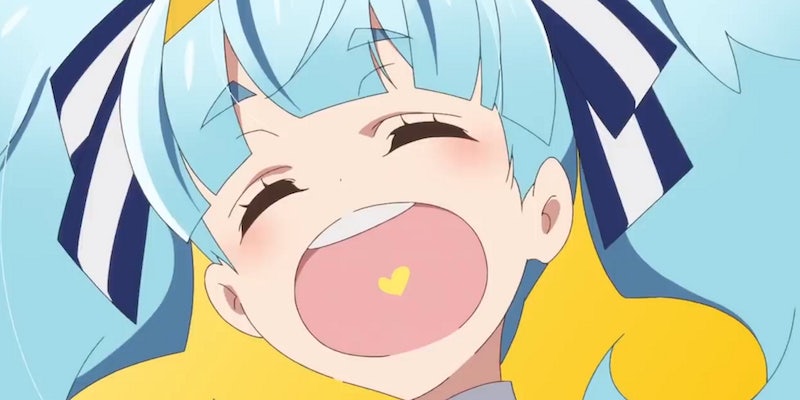 For the uninitiated, Zombie Land Saga follows a zombie idol group called Franchouchou. Its members come from various walks of life across Japanese history, from courtesans to biker gangs, and they’re all zombies. That’s right, they’re all undead. That includes a young child actress named Lily Hoshikawa, who passed away when she was 12 years old.

In the series’ eighth episode, Lily reveals that she was previously assigned male at birth under her deadname, “Masao Go.” She passed away after noticing her first black whisker on her face, causing her to die from sheer anguish.

Of course, being a zombie is a blessing for Lily; now that she’s undead, she won’t go through puberty. She proceeds to come out to her fellow idols, who struggle with her trans identity at first, but ultimately accept her as a fellow girl.

“I’m still Lily, and that’s who I’m always going to be,” she says in the episode. Later on, she stresses “I am not Masao anymore! My name is Lily!”

A family can be just a girl and a professional wrestler. pic.twitter.com/ynlKX9RIhK

It didn’t take long for fans to confirm that Lily is a trans girl. The series’ creators treat her as a girl, gender her as such online, and previous episodes hint to her trans identity. In short, Lily’s character arc is a trans one—and it’s pretty obvious.

For trans Twitter users, Lily is an easy character to love. She isn’t just petite and adorable, she literally dies from gender dysphoria. That’s way too relatable. She’s more than ready to stand up for herself, too, and assert her gender identity. She’s the perfect trans girl role model.

I have never watched Zombie Land Saga but if you motherfuckers start misgendering my angel Lily we bout to have some fucking issues. I stan a cute, trans zombie idol and she's my fucking baby

Lily fanart is also taking over Twitter, as artists drape her in the trans flag’s colors.

Heard the news and binge-watched zombieland saga, that show was SO GOOD AND MUCH BETTER THAN I EXPECTED for more reasons than just the trans rep!!!
anyways here's trans icon lily!!!! pic.twitter.com/uVfY8SoqHz

The girls and their manager, Kotaro Tatsumi, make for pretty great allies to boot.

It goes without saying that trans fans received plenty of pushback over Lily. Some anime viewers keep calling her a “trap,” a derogatory term used against trans women that conflates trans girls with crossdressers. Lily’s fans have since hit back, pointing out how the show pretty explicitly treats Lily as transgender and criticizes anyone who says otherwise.

Lily: i am a trans girl and i literally died from seeing myself hit puberty
Troglodytes: damn… guess we'll never know her actual gender… she's just a crossdressing boy if nothing else.. what a mystery

You guys do know the studio making Zombieland Saga, right? It’s MAPPA. They’re NOTORIOUS for adding LGBT characters to their series. Even ignoring their anime with focus on gay characters, like Banana Fish and Yuri on Ice, Lily is not even the first trans character they’ve had. pic.twitter.com/ou4ykTle7h

So ppl are once again lying about CR b/c, why ever make a valid complaint? It's being said that the translators "made" Lily trans, when in fact she's MORE explicitly trans in Japanese, literally the opposite. This line more closely translates 2 "the name I abandoned/got rid of" pic.twitter.com/0HR46jPOCO

me seeing brainless anitwit losers scramble trying to find reasons to argue lily isn’t a trans girl after they get shut down by people who actually know japanese and LGBT issues in japan pic.twitter.com/ZsdYKnOzax

Trans.
Girls.
Are.
Not.
Traps.
I don't watch Zombieland Saga but I'm pissed at ppl I see calling Lily a "Trap" or by her deadname. I was happy a pretty mainstream anime wasn't afraid to have a trans character. Then here come the transphobes & ppl who think they're being funny… pic.twitter.com/nDhVCnN9R5

Last but not least, if the studio intended for “Masao Gou” to be her “real” name, it's likely they would have written that in the credits. But the credits list “Lily Hoshikawa”, and not out of laziness (the credits sequence was even unique this episode). [Zombieland spoilers] pic.twitter.com/YjegYUqcaH

While trans anime fans face an uphill battle with combating transphobia across fandoms, it’s refreshing to know there’s at least one character that has their backs—even if she’s undead.