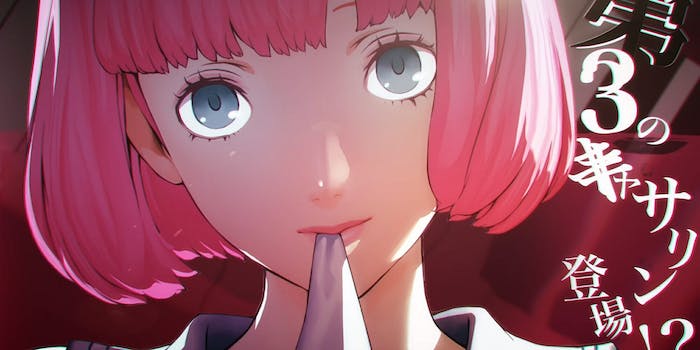 Fans are afraid the remake will be more transphobic than the original.

2017 has been a great year for Japanese game developer Atlus, between receiving critical acclaim for Persona 5’s Western release and officially unveiling Shin Megami Tensei V for the Nintendo Switch. But Atlus is experiencing a Twitter firestorm this week over a remake of its adventure puzzle-platformer Catherine, after some fans claim the game’s new romanceable character is transphobic.

For the uninitiated, Catherine deals with Vincent Brooks, a 32-year-old bachelor who keeps pushing off marriage with his long-time girlfriend, Katherine McBride. After Vincent cheats on Katherine with a mysterious woman called Catherine, he begins having nightmares where he must climb enormous towers while being chased by monsters. The game does this by blending narrative-driven gameplay with puzzle-platforming levels, allowing for multiple endings through different romance options. And on release, Catherine was hailed as pretty groundbreaking for taking two distinct genres and seamlessly merging them together.

But Catherine has always been a source of controversy since it first released back in 2011. That’s partly because Catherine used Erica Anderson, a transgender waitress over at the game’s Stray Sheep bar, for endless jokes about her gender identity. This is a point that’s largely handled well in Erica’s characterization, but Catherine’s male characters repeatedly treat her with disdain, often making transphobic jokes or treating her transness as disgusting. Even Catherine’s writing suggests she is actually a man because she has tower-climbing nightmares, which only men experience, and it uses her deadname in the game’s manual.

So from the start, many LGBTQ fans are skeptical of Atlus’ handle on queer topics. Which bleeds over to Catherine: Full Body, the game’s brand new remaster for PlayStation 4 and PlayStation Vita. Along with updated graphics, the game teases a new romance route with a woman called Rin, a young girl sporting short pink hair and a knack for piano playing.

Many fans of the original game are excited to see where her story goes. But initial reports from Kotaku U.K.’s Laura Kate Dale are leaving some trans women concerned that the game will use Rin as a punchline for the same endless transphobic jokes used against Erica. For one, the game’s new teaser trailer shows Rin seducing Vincent, who proceeds to look on in horror as he stares at Rin’s exposed crotch. Plus the Japanese teaser site for Catherine: Full Body features the transgender gender symbol in both the favcon as well as the trailer’s “play” button, which bounces forward from Rin’s hidden crotch, implying that Rin may have a penis instead of a vagina.

Dale proceeded to argue that Rin’s introduction draws on transphobic humor about trans women manipulating men into sleeping with them, suggesting that Rin “tricks” Vincent into sex. If so, the trailer’s joke hearkens back to some of the transphobia that riddled the original Catherine, along with anime in general.

So, there's a trailer for the Catherine remake, and it looks like the third romance option is going to be a trans woman who Vincent will be horrified about having slept with. URGH, yep, of course this is happening. pic.twitter.com/PnRNC449jX

They use a god damn trans symbol as the website icon for the official new site. All the key art is her lifting her dress to reveal her crotch. Gender neutral name. I don't see how people are reading this as "oh he's just shocked the same as every route in the game.

Further allussion to Rin being a trans woman with a penis, the teaser site for the game has a huge image of her lifting her dress, fading before you see the crotch. Everything here screams trans woman route. https://t.co/3NBgYp51DW

There are people telling me to give Catherine: Full Body a chance, maybe the Rin trans woman plotline won't be anti trans people. Reminder, the original game's credits and manual deadname their only trans character. I'm not holding my breath on this one.

Others shared Dale’s concern, pointing to the fact that the game’s marketing is focused entirely on the mystery and anxiety around Rin’s body.

"catherine full body is EVEN MORE transphobic than the last one" pic.twitter.com/W9hI20Cr2m

In an Atlus game

oh lord in heaven save us

So the comments on the trailer for the Catherine remake are full of people calling Rin a “trap”, a term which weebs insist totally isn’t used to refer to trans women.

In the past decade, Atlus has displayed a bumpy track record with queer representation, including gay panic jokes in both Persona 4 and Persona 5. Many are convinced Atlus will mess up Rin’s characterization if she ends up being a trans girl.

Oh god, Rin is a trans woman? I am so scared considering how they treated Erica in the original game…

But other theories abound about Rin, including the fact that she may lack genitals at all. If so, that would explain the overlap between the male and female gender symbols on the Catherine: Full Body site.

I feel so many people already discounting Catherine: Full Body as bad and like

guys it was JUST announced, before getting your panties in a knot let it release

Also we don’t even know IF Rin is trans, crossdressing, intersex, sexless, not worth hyping “potential controversy”

And yet, despite all the controversy, some are hopeful about Atlus including Rin as a romanceable character. After all, no AAA video game to date features a transgender woman as a love interest. Catherine: Full Body may end up being the first, and if she’s given as much care as Catherine, Katherine, or Erica, she could end up being a decently written character.

I was ready to hate Catherine Full Body for forcing a fanfic Marie type character into a perfectly working story that speaks of a very dualistic view on relationships, no space for a third character, but if Rin is trans Im curious what story Atlus is planning to tell.

Having a transwoman character being a major love interest is HUGE if true, and personally I think this is a GOOD THING, I mean, if it’s true that is(Vincent makes that face all the time).

I’m hoping this isn’t the case, having recently played the original Vincent pulls these over expressed facial expressions all the time and probably how he would react to seeing another woman’s naked body cementing his cheating on Katherine.

It’s hard to say where Atlus will take Rin, seeing as so much is still up in the air about who she is. She may not be transgender after all. Either way, it’ll be a while until fans learn more about Rin’s story. Catherine: Full Body is scheduled for a winter 2018 release in Japan, and the game’s Western launch has yet to be revealed. In the meantime, Catherine is available through PlayStation Now for PlayStation 4 owners who want to try the original release.