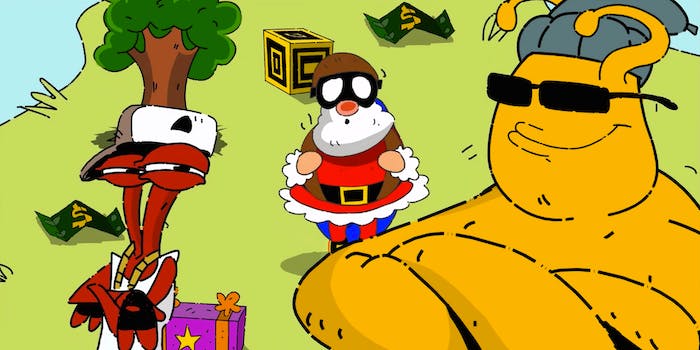 The ‘ToeJam & Earl’ creators are crowdfunding the sequel fans deserve

Sega's alien rappers need your help to go back to Funkotron.

The people behind ToeJam & Earl—the Sega classic about alien rappers—are getting the fans to help fund the sequel. They say it’s the game they always wanted to make.

The original game, released in 1991, was a success, the two sequels didn’t do as well. According to creator Greg Johnson, that’s in part because the studio ultimately wanted him and the design team to go in a different direction. And since the studio was funding it, that’s the game he made.

But with no major studio behind him, Johnson finally wants to put out Toejam & Earl: Back in the Groove, the sequel he planned from the start, and he’s using Kickstarter to do it.

Johnson wants to make an old-school version of the game that calls back to the original but will also incorporate a mix of 2D and 3D graphics. It’ll only be available for the PC, Mac, and Linux to start, but potentially could go to other platforms depending on how much funding the game gets.

By allowing multiplayer capabilities, it’ll have something no other version of ToeJam & Earl does: online mode.

And what would ToeJam & Earl be without some new songs, with animation from James Farr?

Johnson and indie studio Humanature are asking for $400,000, and he’s already raised more than a quarter of that in the Kickstarter’s first 24 hours from 2,000 backers. The people behind it are already grateful to the fans for all the support, but their work is just beginning.

“We need to go from ‘scrambling to try and get our prototype and videos ready for today’ mode, to planning mode, as we collect feedback, complete more of the design, and then start in doing technical evaluations,” an update reads. “Building a prototype, and building a real product are two different things and we have a lot of work ahead which starts with technical planning… (here is where we all knock on the closest wood with crossed fingers and toes).”