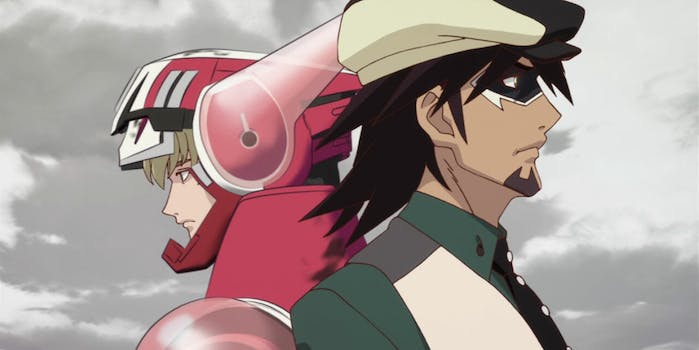 This isn't your average superhero story.

Netflix is crawling with superheroes these days, isn’t it? The streaming service has been riding the Marvel wave with dozens of movies and TV series, but late last year, it added another superhero show set in another universe entirely: the 2011 anime series Tiger and Bunny.

The show features an odd-couple superhero team, Kotetsu Kaburagi and Barnaby Brooks, Jr. The two are thrown together in a world where superheroes are motivated less by doing good and more by performing well for their sponsors. The show developed a cult following in the years since it came out because of its superpowered action in a believable world and in part because of the undeniable chemistry between its two main characters.

What you should know about hit anime Tiger and Bunny

Tiger and Bunny: What it’s about?

Tiger and Bunny takes place in Sternbild, a fictional city-state plagued by high-profile crimes performed by NEXT. The city creates Hero TV, a channel starring a number of corporate-sponsored superheroes who are constantly on-call. The heroes compete for points awarded for typical superhero feats. There are points for arriving first at the scene, for capturing the criminal, and for rescuing victims. The station keeps a running point total, and at the end of the year, the one with the most points is crowned “The King of Heroes.”

One such victor is Kotetsu “Wild Tiger” Kaburagi, an aging hero who can increase his physical abilities a hundredfold for five minutes at a time. However, he has a tendency to cause significant property damage and a low ranking that makes him a liability. When his contract gets bought by a new company, he is paired with the marketable Barnaby Brooks, Jr., a younger man with the exact same powers.

The two don’t get along at first, but Tiger and Bunny follows the duo and their fellow heroes as they learn to work together and trust one another. Kotetsu fights to stay relevant, while Barnaby hunts for his parents’ murderer.

Love superpowered action but feeling burned out on the Marvel and DC cinematic universes? Tiger and Bunny may be the answer!

Tiger and Bunny premiered in 2011, when Marvel movies were just starting to become a cultural force. The whole series is something of a love letter to the superhero genre, with plenty of visual homages and references to comic book stories, past and future. Sternbild feels like an updated version of Superman’s Metropolis—shiny and high-tech, with lots of mythological statuary. Barnaby is motivated by seeking vengeance for his murdered parents, much like Batman.

The characters’ costumes also display the creators’ love of Western comics and their history. The first superhero, Mr. Legend, has powers and a design reminiscent of Golden-Age Superman, with his red, blue, and gold getup, immunity to bullets, and ability to fly. Kotetsu’s old Wild Tiger costume that he wears in the first episode has the primary colors and skintight look of Silver Age heroes. The other costumes—sleek, modern, with the female heroes showing a lot of skin, resemble current designs, culminating in Kotetsu and Barnaby’s Iron Man-esque power suits.

The Japanese influence shines through more in the character writing, particularly Kotetsu’s arc. His dynamic with Barnaby resembles nothing so much as Kamen Rider, a long-running Japanese superhero franchise featuring masked heroes riding motorcycles. The envisioning of the heroes just as everyday people working a demanding, time-consuming job also departs from the near-mythic feel of stories like The Avengers or Batman vs. Superman.

Tiger and Bunny: Mature characters for a mature audience

Kotetsu isn’t really what people expect from most anime protagonists or superhero stories—he’s in his late 30s, a widower, and a single dad struggling to relate to his preteen daughter. Rather than the general audience appeal of characters like Captain America and Thor, Kotetsu was conceived to resonate with an older male audience of salarymen working long hours at corporate office jobs. His ideals clash with the corporate-sponsored reality of Hero TV, his daughter is growing up without him and resents him for his absence, and he still isn’t over the death of his wife.

This extends past just Kotetsu—the world of the show is quite grounded in general. The heroes aren’t a league of allies, but colleagues competing for resources. Most of them, other than two still in their teens, are fully grown adults. There’s also considerable racial diversity—of the eight heroes, one is Latino, one is black, and two are East Asian, and the crowd scenes regularly include darker-skinned characters.

Not that older men are the only ones who’ll find value in Tiger and Bunny—the series has attracted a broad audience. That includes quite a few female fans, in no small part due to the ambiguous relationship between Kotetsu and Barnaby. As their relationship grows, it’s hard to be sure about its exact nature, and the producers have publicly stated that it’s up to viewer interpretation whether it’s platonic or romantic. The two are emotionally closed-off, so it’s no wonder their slow development toward trust and intimacy captured viewer imaginations.

Tiger and Bunny: Differences between Netflix and Hulu

While Tiger and Bunny first aired on Hulu as an early simulcast, it only came to Netflix in 2018. The opening animation may have been confusing series newcomers. Why does it keep zooming in on random parts of their costumes?

Corporate influence vs. idealism is one of the show’s major themes. The character designers emphasize this by blanketing the heroes’ costumes with real-life Japanese corporate logos, much like NASCAR drivers. Rock Bison advertises the yakiniku chain Gyu-Kaku, Blue Rose drinks a Pepsi NEXT, and Origami Cyclone’s ninja-inspired getup bears the logos for a number of anime-related services. Rather than navigate the legal labyrinth involved in including them, Netflix chose to paint over the logos. The corporate influences are left to the show’s fictional companies.

One of fans’ favorite Easter eggs is Scarf Girl—or Scarf-tan to Japanese fandom. She is, as the name suggests, a girl wearing a scarf who appears in every episode. Her involvement varies—sometimes she’s a bystander for the heroes to rescue. Other times she just walks by in the background. While the show was airing, fans searched for her in every episode and came up with wild theories about why she seemed to be everywhere.

The reason? Nothing, really. Scarf Girl plays no major role in the narrative and is just there as a fun extra for eagle-eyed fans. See if you can spot her in every episode!

Do Tiger and Bunny‘s 26 episodes leave you wanting more? Luckily, there are two movies: The Beginning and The Rising. The Beginning rehashes the events of the first series, with an original action sequence at its climax. It doesn’t add much for continuity, but it has some great character moments. Plus, the climactic battle beats the pants off of most Marvel movies.

The Rising, on the other hand, picks up where the TV series left off and introduces a new hero, Golden Ryan. It more or less reestablishes the status quo at the end, which may be frustrating for viewers who weren’t satisfied. It does, however, have an incredibly sympathetic portrayal of gender-nonconforming character Fire Emblem’s backstory that you won’t want to miss.