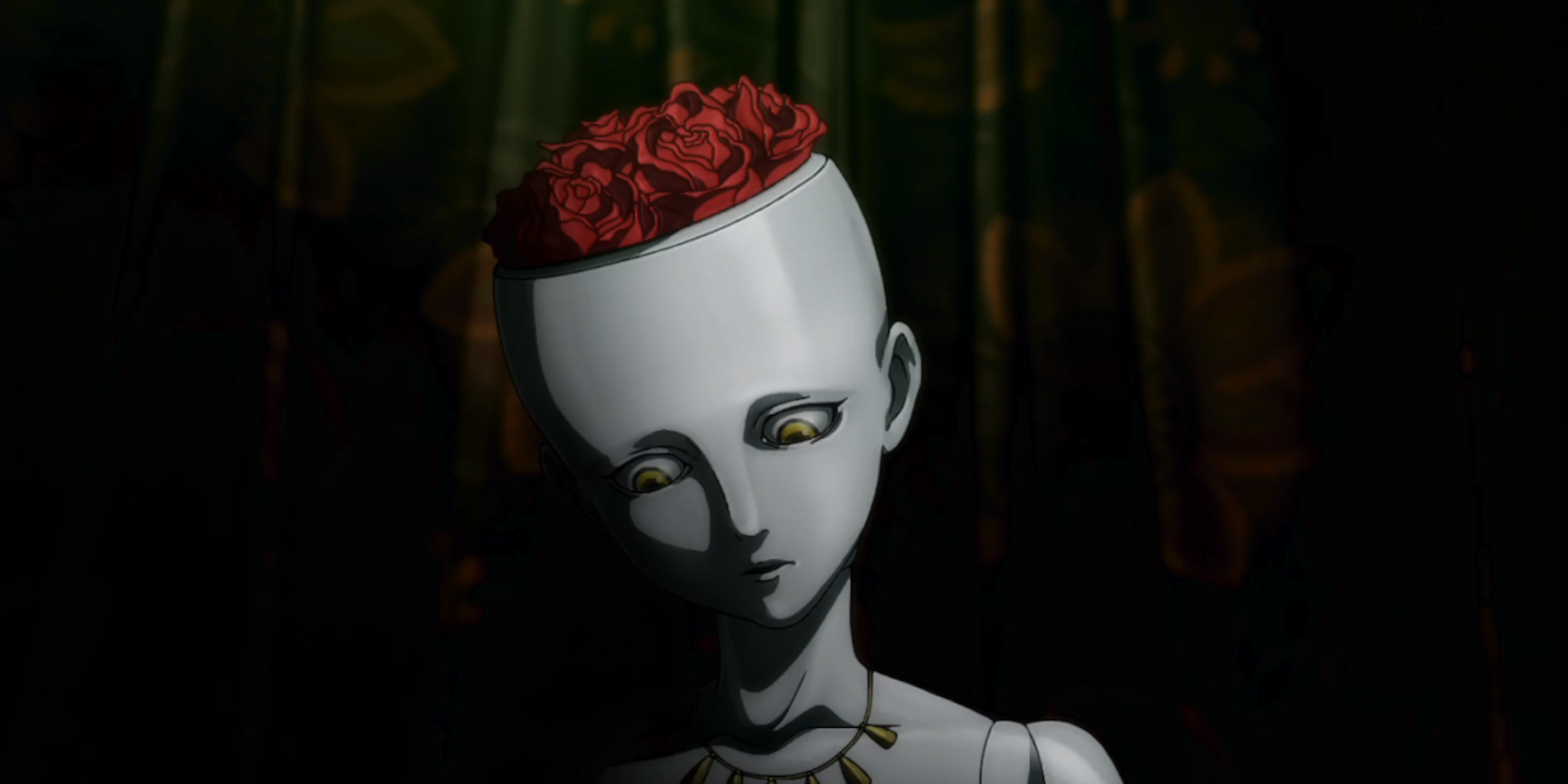 Vampires, monsters, dark magic—this list of horror anime has it all.

Anime is the perfect medium for horror, unleashing nightmares in ways live-action budgets will never be able to replicate. From black magic love stories to flesh-eating monstrosities, some of the finest stories in the anime are steeped in horror.

To give you a head start on your next terrifying obsession, here are the best 15 horror anime series currently streaming. No matter what your tastes there’s something here to make you check your locks twice before bed.

What if an alien invasion happened and no one noticed? In Parasyte, a race of alien beings quietly come to Earth, possessing humans while building an army under the world’s nose. Shinichi Izumi was almost one of their victims, but his Parasyte never fully took over. Now he’s stuck with a murderous shapeshifting alien sharing his body, as ever more vile creatures gather around them. Its humor is macabre, but when Parasyte fully unleashes its body horror charms, you’ll forget any laughter.

Stream it on: Crunchyroll and Hulu

Given Japan’s unique position as the world’s sole nation to endure a nuclear attack, it’s little wonder its science fiction is often tinged with pessimistic horror. Elfen Lied dives deep into the nightmarish results of a government experiment on telekinetic energy, leaving gory heaps of exploded bodies in its wake. Lucy is a Diclonius—a mutated human born with horns and telekinetic powers. After escaping from the government, she takes up with two college students who don’t know her identity. As the government’s hunt for her draws near, Lucy’s powers and sanity are pushed to their limits. If you’re squeamish stay away, this one starts brutal and stays the course.

While investigating a secret fetish society called the Roppongi Club, ex-war photographer Tatsumi Saiga encounters a goddess in the form of a 15-year old girl named Kagura. When Tatsumi is discovered, Kagura saves his life with a kiss, gifting him with the power to destroy anything he photographs. Speed Grapher just gets weirder from there, but thanks to its serialized story each episode feels like a piece of a more significant journey. We recommend viewers with a phobia of dentists, spiders, or dentist spiders to brace themselves for images they’ll never forget.

There are few better starting places for Western horror fans looking to get into anime than Another. Paced similarly to American horror movies with a storyline that will be familiar to fans of Final Destination, Another is a grim, blood-soaked mystery. The students of class 3-3 are dying in brutal, yet seemingly innocent, accidents. It’s up to transfer student Koichi Sakakibara to discover why his peers are dying, and how their deaths tie into a tragedy that struck their school decades before. Another doesn’t need its gore to tell a haunting story, but we’re thankful its inventive death scenes exist regardless.

Not all horror anime is steeped in gore, as the brilliant psychological cyber-punk dread of Serial Experiments Lain shows. Lain is a standard middle school girl living in stand Japanese suburb. She spends time in the Wired—an advanced virtual reality form of the internet. When her classmates begin receiving emails from a student they thought was dead, Lain discovers that life exists beyond our world, where a new reality is taking form. Haunting and beautiful, Serial Experiments Lain is a digital ghost story about the nature of existence and myth.

Looking for a bite-sized horror treat? Yamishibai: Japanese Ghost Stories is an anthology series of five-minute animated motion comics, blending still images with moving enhancements. The sketch-style art adds a dreamy quality to these tales of ghosts, black magic, and demons, making each one feel like its being told around a campfire. Given the complex nature of some of these series, Yamishibai’s spooky shorts are a delightful change of pace from long-form anime.

This international anime smash has developed a rabid fanbase through beautifully animated battles and its cold-blooded disregard for keeping characters you love alive. For over a hundred years humanity has lived in giant walled-off settlements, designed to keep the monstrous, flesh-eating Titans at bay. Like Game of Thrones, Attack on Titan often finds its most horrific moments when our heroes best-laid plans fall apart.

Stream it on: Netflix, Hulu, or Crunchyroll

Vampire stories seldom ask you to sympathize with the monsters, but Shiki isn’t your standard vampire story. Beginning slowly as a mystery involving a series of unexplainable deaths, Shiki quickly escalates into a full-fledged exploration of blood-sucking fiends. With villains both alive and undead, Shiki doesn’t always make it easy to know who to root for, but that just adds to the drama. Plus if the mystery doesn’t move you, there’s a ton of staking to look forward to later in the series.

Stream it on: Crunchyroll or Hulu

Some might balk at describing Dusk Maiden of Amnesia as a horror series, and they’d have a point. This show isn’t purely designed to scare you. Instead, the supernatural love story intertwines multiple genres into its spooky soap opera. Teiichi Niiya is haunted by a girl. Yuuko Kanoe has been dead for years, but she can’t remember her past. With the help of Teiichi and his club of paranormal investigators, Yuuko sets out to uncover the secrets of her past, no matter how sorrowful they may be. Peppered with romance, comedy, horror, and suspense, Dusk Maiden of Amnesia might not give you nightmares, but it’ll stay stuck in your mind.

The second series in the Blood franchise is a change of pace from Blood+ and Blood: The Last Vampire, leaving behind its vampiric roots for a broader horror direction. Following a teen monster hunter in her quest against the Elder Bairns, this amalgamation of H.P. Lovecraft’s Great Old Ones and traditional Japanese folklore is full of twists and staggeringly graphic violence. Saya is a sympathetic heroine, which makes the atrocities she faces all the more harrowing, while the beautiful animation makes each fight a thrilling bloodbath.

Hulu’s Darker Than Black is an oddity; possibly the first superhero takes on a slasher movie style anti-hero. Ten years ago a mysterious anomaly called “Heaven’s Gate” changed the stars themselves and led to the birth of “Contractors,” superhuman being capable of great power at a personal cost. Each time they use their power, Contractors are struck with an involuntary compulsion, from eating a specific food to self-harm. Our hero is Hei; a Contractor tasked with brutally hunting down the rest of his kind. We’ll never know what David Cronenberg’s version of The Avengers would look like, but Darker Than Black gives us a twisted idea.

For 10 years Death Note has been a favorite of American anime fans—and thanks in part to its wide availability. Its premise is simple, yet horrifically relatable. A teenage boy, Light Yagami, finds a notebook with “Death Note” written on its cover. Inside he finds a list of rules.

At first, it seems like a joke, but when the Death Note’s magic becomes terrifyingly real Light sets out to use his powers for good, cleansing the world of crime. While Light’s intentions are initially good, the mysterious detective known only as “L” has to track him down when Light goes mad with murderous power.

Stream it on: Hulu and Netflix

13) High School of the Dead

If some anime is like the band Radiohead, thoughtful and challenging to fans who are willing to take the time to absorb its charms, High School of the Dead is like Motley Crue. It’s a loud explosion of fan service that pours out skimpy outfits and wall-to-wall zombie killing before asking if you want more. Part Degrassi, part Dawn of the Dead, High School of the Dead isn’t here to challenge you. It just wants to make sure you have a good time. Sadly, Hulu has a slightly censored version of the show, with some of the more graphic bits of sex and violence covered by shadows. It’s a testament to how much fun HSOTD is that we’re still recommending it.

Including Psycho-Pass on this list may be controversial to some horror purists, but if we lived in its world, we’d have nightmares every night. Future humans have discovered a way to monitor people’s mental wellbeing, swooping in right before someone goes crazy to keep them off the streets. Armed with special handguns called Dominators, special elite enforcers pursue, arrest, and if necessary, kill, the disturbed, leaving a bloody trail in their wake in this dystopian horror show. You don’t need demons to have horror; sometimes you just need human creativity taken to its ultimate extremes.

Stream it on: Crunchyroll or Hulu

Cities come fraught with danger, but if you’re careful it’s easy to avoid the hazards, like criminals or flesh-eating, superpowered, ghouls. Hiding among mankind by day, ghouls hit the streets at night, ready to gorge themselves on their neighbors. After surviving an attack Ken Kaneki becomes the first half-ghoul-half-human hybrid, but he soon learns that living in both worlds has gruesome consequences. Darkly funny and almost obscenely violent, Tokyo Ghoul is a treat for anyone—just don’t try to watch it during dinner.

Streaming it on: Hulu