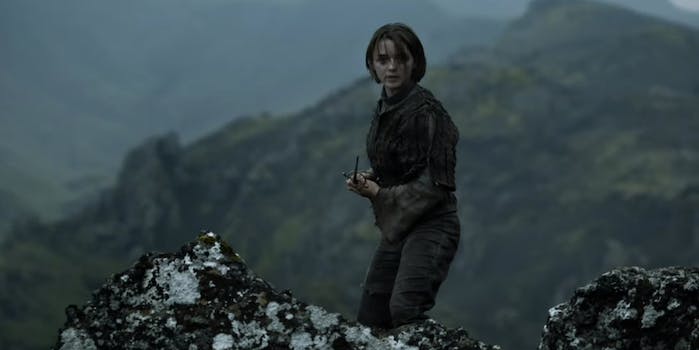 Fans are upset over this missing ‘Game of Thrones’ plot twist

Book fans saw a plot twist in last night's Game of Thrones, but it wasn't the one they were expecting.

Warning: This article contains spoilers for Game of Thrones and plot points in A Song of Ice and Fire.

To say that there was hype for “The Children,” the Game of Thrones season 4 finale, is a bit of an understatement.

Showrunners David Benioff and Dan Weiss called it “the best finale we’ve ever done, bar none” and said it was their finest hour. Out of the 10 episodes the show’s produced this season, it’s the only one submitted for a writing Emmy. It had to somehow wrap up multiple storylines, left hanging by last week’s Battle of Castle Black, after Prince Oberyn Martell’s death. And book readers have been hyping it up with a knowing look for weeks now, mentioning something about yet another twist.

But while the finale almost certainly delivered what it promised and will have people talking for weeks, the book readers are more focused on what didn’t happen in the episode—or rather, who didn’t show up.

They were baffled and outraged.

10 SECONDS OF LADY STONEHEART WOULD HAVE BEEN ENOUGH. 10 SECONDS.

twitter’s reaction to the GOT finale based solely on my timeline https://t.co/qJbMI6TMWz

NO LADY STONEHEART??? BUT??? pic.twitter.com/nuRVJWAfbF

I am baffled by the lack of Lady Stoneheart tonight. #GameOfThrones

I bet u lady Stoneheart is in “wherever whores go” with coldhands, strong belwas & moonboy for all I know #GameOfThronesfinale

They thought that Benioff and Weiss missed out on using that “perfect ending.”

LITERALLY MAD THEY DIDN’T PUT THE BEST CLIFFHANGER ON GAME OF THRONES. #LadyStoneheart

[GAME OF THRONES SPOILERS] How the hell do you not end on Lady Stoneheart, HBO. Perfect finale literally written for you & you PASS ON IT???

Some even remained blissfully (and fruitlessly) hopeful when others were not.

Anyone else half expecting a Lady Stoneheart post-credits scene on tonight’s #GameOfThrones?

I will not turn off @HBO until Lady Stoneheart shows up. I’m sure this is just a commercial and she’ll appear at any second …

And then you have the people who are basking in the Schadenfreude glory.

Just going through and favoriting every tweet complaining about Lady Stoneheart.

Lady Stoneheart would’ve been a new character on Game of Thrones, but you’ll know her better by a name she had in a former life: Catelyn Stark. Yes, she died at the Red Wedding, but she was resurrected by Beric Dondarrion and Thoros of Myr a few days later and has been terrorizing Westeros (and any Frey, Lannister, or Bolton supporters) with the Brotherhood Without Banners ever since.

Her first book appearance, on the final pages of A Storm of Swords, is yet another twist dropped on a book of twists and turns and shows her hanging three Freys who took part in the Red Wedding. You don’t meet her again until another character runs into her in A Feast For Crows, but word of her vengeance makes its way throughout Westeros.

In the grand scheme of things, she may not have a huge part to play, but that simple nod would’ve been enough with the added bonus of Michelle Fairley possibly returning.

The non-reveal managed to make some book readers feel bad for hyping the episode to the point that they did.

“We are sorry,” Evil_Arcane_Homo wrote in r/gameofthrones. “We have severe blue balls just as much as you do right now over the whole mess. We have learned our lesson, and will contain our hype in the future. This was an excellent lesson in humility.”

However, don’t take your virtual pitchforks over towards the comments sections just yet. Just because Lady Stoneheart didn’t appear in the finale doesn’t mean she won’t appear in a later season—or even have a bigger role in the show.

Entertainment Weekly’s James Hibbard, who didn’t like the original Lady Stoneheart twist in the books, felt that leaving her out of the show (at least thus far) was a good thing.

“So removing LS from HBO’s version gives the story of Catelyn Stark a stronger — albeit more tragic — ending,” he wrote. “I want to remember Catelyn for who she was, not as some twisted Monkey’s Paw version.”

Regardless of their intentions, Benioff and Weiss will have very many angry fans on their hands, even if they do intend to bring Lady Stoneheart into the series.

And while some of the fans may have logic on their side, they’re simply too angry right now to take any sort of logic in.

“I know they probably haven’t cut her, just pushed it to next season, yet that LSH cliffhanger is made for TV finales,” mathewl832 wrote in the r/asoiaf LSH meltdown thread. “D&D missed a massive change to generate the sort of media and internet frenzy that most shows can only dream of.”

We’ve got a long hiatus ahead of us. Just don’t spoil it for everyone else in your frustration.

Screenshot via Game of Thrones/YouTube