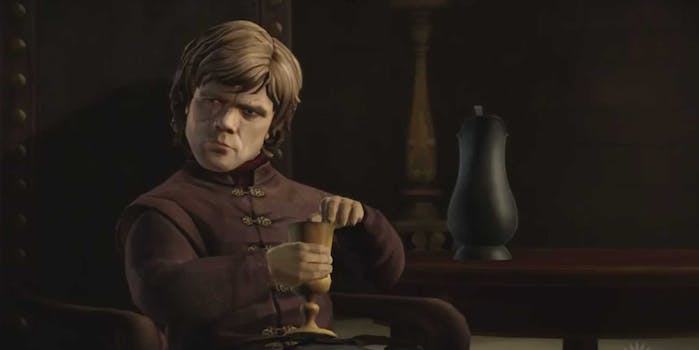 No word on release date, but at least we can ogle the trailer.

Telltale Games, creators of the Wolf Among Us and The Walking Dead games, are about to release a similar title set in the Game of Thrones television universe. On Thursday, Telltale released the first official trailer for the game:

Actress Lena Headey, better known as Cersei Lannister on Game of Thrones, narrates the trailer. According to a press release, several members of the cast “will reprise their roles in the game.” This includes Peter Dinklage (Tyrion Lannister), Natalie Dormer (Margaery Tyrell), and Iwan Rheon (Ramsay Snow). Other cast members will appear in future installments of the project.

This installment follows the story of House Forrester, allies of the Stark family, and in turn, enemies of the Lannisters. Players will control one of five House Forrester members at any given time. Don’t worry, Thrones purists, the Forresters weren’t invented for the game; they come from the books. Considering how dense each episode of Game of Thrones can get, it’s not surprising that the Forresters practically disappeared from the show.

The episodic format of the game is well-suited to Game of Thrones. The six-episode series will focus on story and character development over combat mechanics and beheading physics. A previous Game of Thrones video game, released in 2012, was critically panned.

Telltale plans on releasing an installment of the game each month, right up until the start of Game of Thrones Season 5 in April 2015. (The game’s story runs from right after Season 3 to just before Season 5.) Knowing Telltale Games, however, it’s likely that there will be delays.

Telltale announced the game late last year during the VGX video game awards. Since then, the team has been rather quiet about the game’s development. Many were left wondering if the team would still be able to hit its target date of late 2014. Although the press release offers no specific release date, the game “will be arriving for download soon on PC/Mac, PlayStation 4, PlayStation 3, Xbox One, Xbox 360, and iOS, with additional platforms to be announced.”