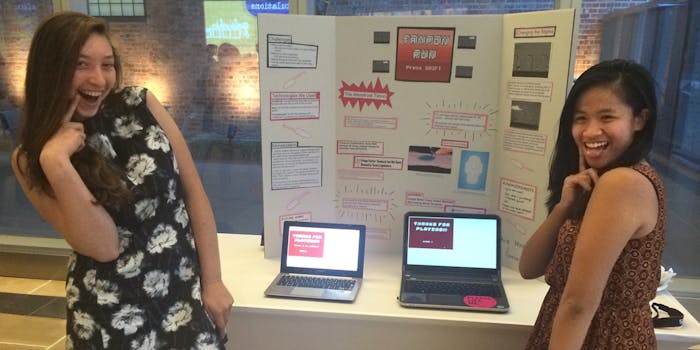 The ladies behind Tampon Run are way cooler than you were in high school.

What were you doing when you were 17? Prepping for your SATs? Holding down an after-school babysitting gig? Getting stoned and eating Chicken Selects from the McDonald’s drive-thru before making BS Wikipedia edits? That’s cool, I guess. Meet Andrea (Andy) Gonzales and Sophie Houser, two New York City-based 17-year-olds who made a kick-ass feminist video game.

Andy and Sophie are the brilliant minds behind Tampon Run, an online side-scroller game that lets you throw tampons at your opponents instead of shooting them. (The game, they tell me, was in part inspired by the 2013 controversy over the Texas capitol police confiscating women’s tampons and pads before entering a courtroom during an abortion hearing, out of concern that they’d throw them at the judge; guns, however, were allowed into the courtroom.)

Tampon Run is part-quirky feminist commentary, part-critique of the normalization of gun violence in video games; as the girls write in a preamble to the game, while you might find the premise of the game strange, “it’s stranger that our society has accepted and normalized guns and violence through video games, yet we still find tampons and menstruation unspeakable.”

Because we at the Daily Dot are huge fans of women in tech (not to mention huge fans of period jokes), we got in touch with Andy and Sophie to talk periods, feminism, Gamergate, and why they chose tampons over Diva Cups.

Can you guys start by telling me a little bit about how you came up with the original concept of the game?

Andy: We met at Girls Who Code, a summer immersion program, which aims to close the gender gap in the tech industry. At the end of the program, which is seven weeks long, we were expected to develop a final project and pitch it to lots of people. I had been pretty open about my desire to develop a video game as my final project, and I wanted to give it a feminist message because there’s a lot of hypsersexualization of women in video games. Especially if you’re following Gamergate, there’s a lot of lashing out at women in the tech industry right now. So I thought it was very relevant, and I wanted to address it in a video game. Then when Sophie joined, we were brainstorming ideas for a social justice video game, and she joked about throwing tampons.

How long did it take to make?

Sophie: We only had a little bit less than a week of actual coding.

Andy: And then after we left the program, we added a few more things. Now we’re getting feedback from so many people to add Maxi-Pad shields or applicator bombs, super-absorbency tampons.

I was gonna ask about that—why tampons? Why not pads or Diva Cups or Moon Cups?

Sophie: I don’t know exactly. We just came up with the name: Tampon Run.

Andy: But we’re open to incorporating other products. Obviously tampons aren’t the only option for taking care of yourself when you’re menstruating.

What was your guys’ relationship with your periods, prior to making this game?

Sophie: At first, I was like, “Oh, I hate my period, it’s so annoying.” But I’ve come to realize that it makes me part of this club, like, we’re all in it together. Any girl could ask me for a tampon, and all my friends can talk about it. It’s something that connects you with all these other women, and I kinda realized that before the game, but the game definitely helped me realize that.

Andy: When I first got my period, I was like, “Yeah! This is awesome! I’m a grown-up now!” It was like a rite of passage. It’s cool in that sense, but then I had it a few more times and disliked it more and more. But I agree with Sophie in terms of being part of a community where we all relate to this one experience. 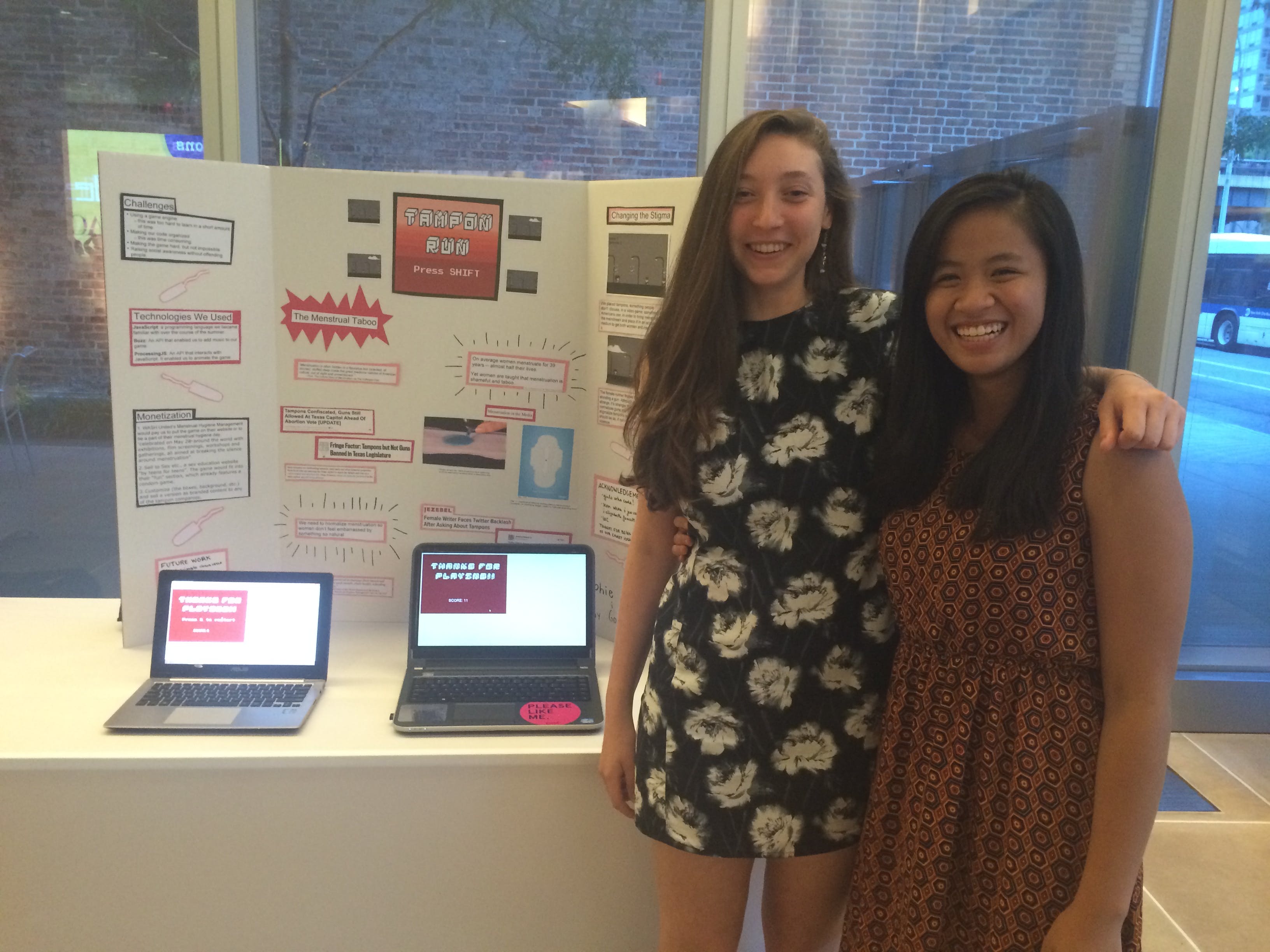 What do your teachers and parents think about the game?

Sophie: I think when I came home and told my mom, “Mom, I have an idea for a game where girls throw tampons,” she thought it was a pretty strange idea. But we started working on it and she saw the game, and she’s supportive and excited about it now.

Do you think there’s still a stigma surrounding menstruation with your friends your own age? I’m 25, so I’m a little bit older than you guys, but when I was in high school, I feel like it was gradually disappearing.

Andy: In middle school, there was a commotion in the hallway, and I wanted to see what was going on, so I worked my way in, and in the center of this circle was a tampon. It was unused and unwrapped. Someone had pushed the applicator so the actual tampon had been pushed out. People were so riled up about it. They were so confused and bewildered. That memory didn’t really come up again until we started working on the game, but I realized it’s kind of ingrained in us to think of menstruation as a weird thing.

How have your male friends responded to the game so far?

Sophie: Actually, a few days after we released the game, I had a guy friend come up to me and say, “I played the game and I realized I never want to talk about menstruation, and I don’t know why I do that. That’s so weird.” It was so great that I had affected someone that I knew and changed their opinion.

Andy: No one’s specifically come up to me and told me how it changed their lives, but they’ve been really supportive about it. I was hesitant to show Tampon Run to them, because I wasn’t as comfortable as I am now, but the response has been really great from both boys and women.

What has the response been like from the gaming world?

Sophie: It wasn’t really out in the gamer community until recently, and then websites started blogging about us and more gamers still started seeing the game. Responses have been very positive.

Andy: We’ve had a lot of people tell us how impressive it was for our first game. Obviously it’s not the most complex game in the world, but it’s really nice to hear.

Were you expecting that overwhelmingly positive response? The gaming world has traditionally been pretty male-oriented, especially in the context of Gamergate.

Andy: The gaming industry—there are flaws, definitely. We were pretty surprised by how much positive feedback there was. We got our first hate mail this morning, which was really exciting. It was this group called All Men for Feminism, and they called us misogynists, female haters. I wasn’t offended; I was just really excited that someone felt passionate enough about the game to respond to us and confront us about it.

Sophie: We weren’t really thinking about how gamers were gonna respond, just that it was gonna be for a general audience. But I guess it really is nice that the gaming community has been very accepting of it, especially in light of what’s been going on recently.

Do you have any parting wisdom for girls who want to code?

Sophie: Do it. Definitely do it. I find it really empowering when you build something from the ground up and you build your code and watch your work on the screen. Sometimes it’s so frustrating getting this little thing to work, but it feels so good and you feel so good about yourself and it’s an incredible experience. I worked on the jump for the running girl in Tampon Run all day, every day, and seeing her jump was such a satisfying experience. I’d tell all girls they have to try it out somehow.

Andy: For any woman who wants to join the tech industry or the gaming industry, they should totally involve themselves, because even though there is such a small percentage of women involved in tech, every single one of them is so welcoming to anyone who wants to be a part of that. The girls in the tech community really stick together.