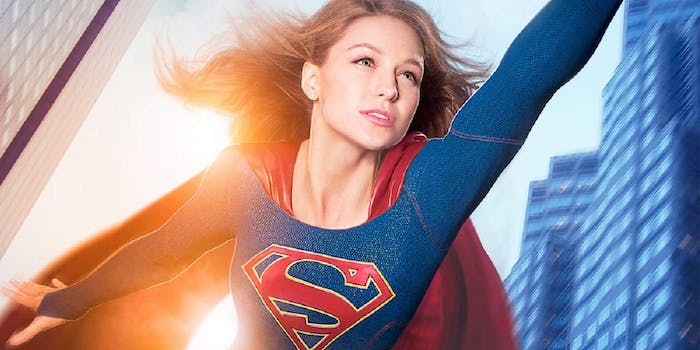 ‘Supergirl’ takes flight with an inspirational and truly fun premiere

'Supergirl' is a perfect blend of badass superheroism and dorky romantic comedy -- just like classic 'Superman.'

Superhero television is a competitive field these days, but Supergirl cuts through the crowd with a double dose of charm and sheer enthusiasm.

Supergirl‘s premise will be familiar to Superman fans, because it’s basically the same set-up: a young Kryptonian is sent to Earth and adopted by human parents before growing up to forge a career in journalism. The main difference is the tone, which is far sunnier than Zack Snyder’s dark-and-gritty Man of Steel.

Kara Danvers (Melissa Benoist) is Clark Kent’s younger cousin, and the show wisely keeps Superman on the sidelines. But even as a distant and almost mythological figure, Superman adds an interesting dimension to Supergirl‘s feminist message.

The twin origin stories are so similar that you can’t help noticing the subtle difference that held Kara back from becoming a hero: no one expected it from her because Superman was already on the scene. After years of trying to blend in with normal humans, her powers began to atrophy. But as soon as the world gives her a reason to fly, she realizes how strong she can be.

The pilot episode gives us this entire origin story in under an hour, from Kara’s day job (personal assistant a despotic media mogul played by Calista Flockhart) to her struggle with embracing her Kryptonian superpowers. Supergirl is a truly old-school superhero tale, with one welcome exception: the lack of secret identity drama.

Secret identities have always been a popular theme in the superhero genre, but after decades of Spider-Man and Batman movies, the trope is getting stale. Either the hero looks like a condescending asshole for lying to his friends and family “for their own good,” or the friends and family look like idiots for failing to notice what’s going on.

Kara Danvers, however, has no time for that nonsense. As soon as she decides to become a superhero, she tells a friend and he helps her pick out a costume. By the end of the episode the entire supporting cast is in on the secret, with the obvious exception of Kara’s boss and the villains. This leaves us with the best of both worlds: Supergirl still has to protect her secret identity from the bad guys, but she doesn’t waste time angsting about the supposedly lonely tragedy of having cool superpowers.

Refreshingly, Supergirl sidesteps the idea that heroes should feel burdened and guilty about their powers. In fact, the first episode is all about Kara realizing the awesomeness of reaching her full potential, which is straight-up delightful to watch. She literally kicks her feet in excitement when she sees herself on the news, saving people from a plane crash! It’s so cute! Leave the self-flagellation to Daredevil.

When the first Supergirl trailers came out, they generated a lot of criticism from viewers who thought the show looked like a “chick flick.” To be fair, Kara’s boss is reminiscent of Meryl Streep’s character in The Devil Wear’s Prada, and the episode does include a couple of dorky romcom scenes like Kara’s meet-cute with Jimmy Olsen. But it’s hard to see this as a problem when the same themes play out in Spider-Man, The Flash, and most of the Superman movies. The only difference is that Supergirl has a female protagonist.

“Having a crappy boss and absolutely nothing to wear,” says Kara to her sister at one point. “This is what normal looks like.” She’s right. Kara Danvers is universal to the point of being basic, but no more so than Peter Parker or Clark Kent. And the fact that she has a workplace crush and shiny blonde hair doesn’t detract from her ability to lift a car over her head.

As soon as there are more female superhero adaptations out there, this type of criticism should hopefully die out. Fans will have the option of choosing between a more diverse range of characters, in the same way that The Flash plays to a slightly different audience than Gotham. In the meantime, if you enjoy the lighthearted humor and wholesome heroism of Christopher Reeve-era Superman, you’re sure to enjoy Supergirl.