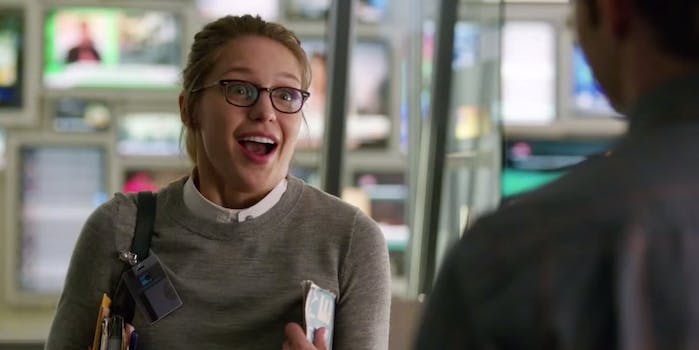 The love/hate divide over the new ‘Supergirl’ trailer

The most polarizing moment in the new Supergirl trailer is... all of it.

The new epic battle in the world of superhero fandom has arrived, only it’s not playing out on screen.

Perhaps as a way of keeping everyone from getting distracted by the, er, distracting aesthetics of the first upfront trailer, a second trailer, cut to actual trailer length and with the look and feel of a more typical superhero drama, has surfaced today:

But if CBS hoped to halt the impending Internet war over Supergirl, it’s already too late. It’s no secret that plenty of people adored the new trailer, with its cute, fun tone, its throwback to light ’90s workplace dramadies, and its unabashed feminism. But one woman’s treasure is another woman’s trash, apparently, and for every squeal of delight there have been plenty of groans of disgust—and a fair share of drama for everyone.

So Super Girl is actually the Black Widow sketch from SNL?

@abrahamjoseph So it's a trailer for a superhero show that…looks like a mediocre workplace comedy for the first third? Um.

OK, yes, sure, last week’s SNL sketch parodying the cry for a Black Widow movie eerily predicted Supergirl‘s late ’90s “chick-lit,” Devil Wears Prada feel, with its focus on office life, fashion, and just girly things. Still, as many of its supporters have pointed out, while it’s clichéd, there’s nothing inherently wrong with any that—especially since Kara also gets to fight crime and fly and have superpowers. Is it really worth judging the book by its superficial trope cover?

Yes, most def, is the Internet’s apparent response.

The Second Battle: Who are you calling “girl”?

If you’re like me, you viewed Calista Flockhart’s speech to Melissa Benoist about not being ashamed to call herself a girl as an empowering, fully meta moment in which the character breaks the fourth wall in order to address geek culture’s longstanding disparagement of all things girly. By tackling this dismissive “fake geek girl” logic head-on, many of us felt the show was announcing its stance as a gives-no-fucks feminist vehicle, and essentially telling any haters in the audience to deal with it and move on.

There's nothing wrong with being a girl and if you see it as anything less than excellent, you might be the problem #Supergirl #boom

But not everyone saw this moment that way. Many fans reacted to the moment’s over-the-top nature.

I sure hope the new Supergirl show is about meeting cute boys and frustrations with average girl problems.

Others read the dressing-down Flockhart’s character gives Kara when she asks why she can’t be called “Superwoman” as the show’s way of being condescending toward women who might not want to be belittled by being addressed as “girl.”

@jennygadget @ajaromano I thought it was about a particular style of girl. Inside patriarchy. Cosmo Girl. Barbie girls. Girlie girls.

How about that Supergirl trailer/entire episode & that part poking fun of fans who might not like the word "girl" attributed to women?

Yikes. I get why people are upset, but I’m pretty sure that divide-and-conquer wasn’t a part of the Supergirl writer’s room agenda when it built that speech into the pilot. Don’t get distracted, women, girls, ladies, and other non-dudes! Surely a three-dimensional female superhero with complexity and badass fighting ability is all to the greater good, regardless of whether we call her a girl or not, right?? Right??

Whatever our feelings on the trailer, we each have an opinion about it.

More to the point, we each have an opinion about other people’s opinions!

When people tweet at me passive-aggressive comments RE my thoughts on #Supergirl it makes me want to HULK SMASH TWITTER!!!!

Do not come to me to complain about the "girl" thing. Look at my damn Twitter handle. Are you serious? #Supergirl pic.twitter.com/Z2TFlu10L2

I have hopes for the SUPERGIRL show but can understand others not digging the trailer. People who aren't convinced aren't enemies.

"maybe we can agree to disagree on the supergirl trailer?"

the entire internet: "NO, THIS CAN ONLY BE SETTLED BY BLOODSHED."

The Winner? Marvel, as it watches the DC television universe slowly implode on itself