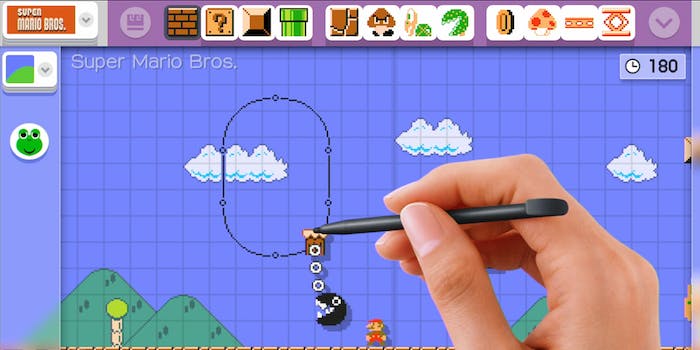 Why Super Mario Maker is Nintendo’s most exciting new game

Nintendo may have created a game more brilliant than intended.

I didn’t expect the most interesting Nintendo game coming out this year to be one I had to build myself.

Super Mario Maker is about designing and sharing custom levels of Super Mario Bros. No one is allowed to upload a level for anyone else to try unless the level can be beaten.

Why Nintendo requires this baseline prerequisite becomes apparent the first time you see the build options available in Super Mario Maker. I don’t have an encyclopedic knowledge of all the different enemies and elements from across the dozens of Super Mario Bros. platforming games released since 1985, but every element I did remember was available among my options for level contents. Blocks, pipes, mystery blocks (the gold ones with the ?), Goombas, Koopa Troopas, Piranha plants, etc.

Super Mario Maker is another Wii U game that makes excellent use of the GamePad and stylus. The list of potential level elements appears in a row across the top of the screen. The bulk of the display is an opaque grid set against a colorful background that would be at home in several different Super Mario Bros. games. Tapping one of the elements at the top selects it for building, and tapping on the grid places the element in that square.

No enemy has to remain in its default state. If you want to make a huge Goomba that stomps across the screen, you click and drag a mushroom from the top toolbar and drop it over the Goomba. To make any enemy fly, just grab the pair of wings from the toolbar and drop it on top of the enemy. It only occurred to me later that I should have tried to drop a pair of wings on a Piranha plant just to see what happened. 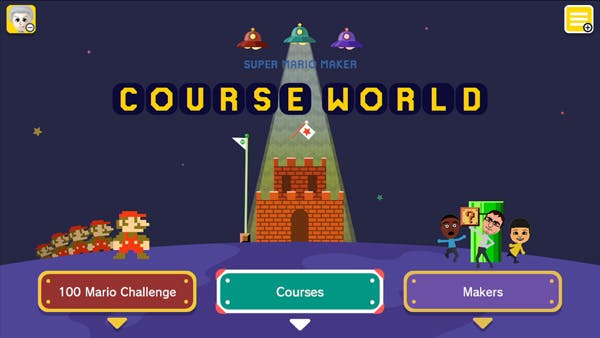 Someone who doesn’t understand the semantics of the Super Mario Bros. games may have trouble grasping these sorts of basic building techniques. For franchise veterans it’s like an opportunity to speak a familiar and beloved language. If you want a green 1UP mushroom to pop out of a mystery block when Mario strikes the block, you place the mystery block in the build area, and click and drag a 1UP mushroom from the list of build elements over to the mystery block.

Enemies behave by default the way you would expect them to, i.e. you don’t need to program a red Koopa Troopa to keep walking back and forth over a platform. There are several different varieties of each enemy type, but rather than forcing the player to scroll through lists of the variations, you just place the default type within the level, grab it with the stylus, and then “shake” the enemy until it changes form.

Level elements require more finesse. If you want a pipe to be something that Mario can slide down, you need to grab a little Mario from the toolbar and physically drag it down into the pipe, mimicking how the pipe will behave in the finished level. Getting objects on conveyor belts, setting up platforms that will drop under the player, these are other more complex elements that take some time to get right. And this is where the prerequisite to make levels beatable, before they may be shared with the Super Mario Maker community comes into play.

In first-person shooter multiplayer map development, one of the tools used by developers to make sure the players are flowing through the levels as intended is the heat map. Developers can trace how players move and where players die, expressed as a map of hot and cold spots showing more and less activity.

That was the first thing I thought of when I saw the tracking feature in Super Mario Maker. It’s like a series of opaque shadows that trace Mario’s path through the level and can therefore show precisely where and how a player died in the level. The player can then adjust elements within the level as needed, to fill any gaps that made the level impassible.

The tracking tool also serves as a gauge for level difficulty. Just how precisely does someone have to nail a jump to proceed? Levels uploaded to the community will be arranged by difficulty, so if a level designer wants to make sure their level isn’t ranked as too difficult or too easy, the tracking tool can provide simple-to-parse assessments of the level design.

When someone designs in Super Mario Maker, they aren’t just having fun playing around with elements from the Super Mario Bros. franchise. They really are learning, in part, how a game designer’s mind works. It feels like an obvious statement, in retrospect, but it wasn’t until I saw the build and assessment tools in action at Nintendo’s booth at E3 that this really struck home.

Super Mario Maker can be frivolous fun, but it also might be one the most serious and mature games that Nintendo has developed. The potential for Generation X parents to share the memories of and love for early Super Mario Bros. games with their children is wonderful, but parents are also simultaneously teaching their children about game literacy.

In a world where video games are becoming an exponentially larger part of the cultural landscape, something like game literacy may be a bona fide skill for our children to have.