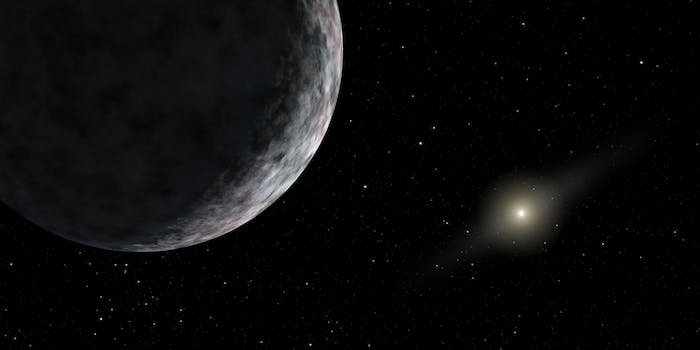 Did researchers really find a ‘super-Earth’ in our solar system?

According to two new open access unreviewed papers, there may have been a giant, Earth-sized planet hanging out in our solar system this whole time. Researchers from Sweden and Mexico using data from the Atacama Large Millimeter/submillimeter Array in Chile claim that a mysterious object, another planet about 1.5 times the size of Earth, may be lurking deep in our solar system beyond Pluto.

Then again, maybe not.

According to Ars Technica, the claims were not met without skepticism. They cited one series of tweets from planet scientist Mike Brown that read:

In a Slate post, astronomer and writer Phil Plait had his own thoughts. He noted that the papers have not yet been peer reviewed, so it’s possible the claims will get rejected outright.

Plait said that the two teams of researchers were both looking at distant star systems, W Aquilae and Alpha Centauri. But each noticed the object, and after some calculations determined that it had to be within our solar system.

It’s possible that the object is a small, icy world, similar to Pluto and closer than the two research teams think, Plait said. He said it’s unlikely that it’s a super-Earth or a brown dwarf (another object proposed by the groups that’s more massive than a planet but less massive than a star). The reason, he cited, was statistics.

“Why would I think an icy body is possible when a planet or brown dwarf isn’t? It’s because there are lots of iceballs out past Neptune, millions. But it’s very unlikely there are more than a few bigger objects out there; the bigger they are the fewer there’ll be,” Plait wrote. Basically the ALMA has a tiny field of view—similar to looking for lost keys on a football field through a soda straw, Plait wrote. So if you just happened upon a huge planet that way, it would be more statistically likely that there were many of them than that you had just happened upon the one.

He concluded saying that he’s still just skeptical—extremely so—but that in the presence of extraordinary evidence he may be swayed to believe the extraordinary claims.

If the claims are valid, however, we may have an Earth 2.0 closer to home than we ever thought.