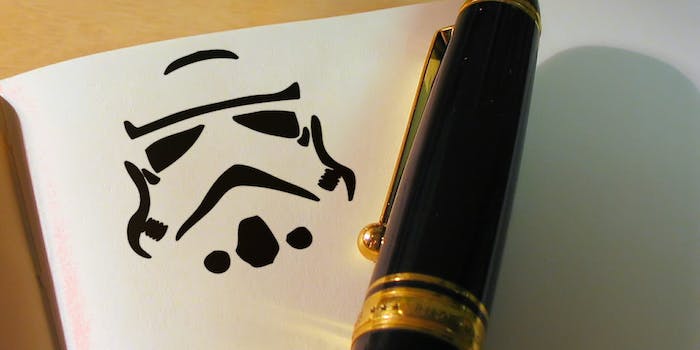 Be a Jedi Master of 'Star Wars' grammar.

To paraphrase Yoda: “Judge me by my grammar, do you?” Well, no offense to you, Yoda, but yes. Yes we do.

What you say matters, but so does how you say it—especially when you’re talking to a bunch of hyper-precise geeks. With the release of The Force Awakens just days away, there has never been a better time to discuss Star Wars than right now, and to help you navigate those conversations without sounding like a total rube, we’ve prepared a Star Wars style guide.

These reminders about grammar, style, and formatting will ensure that you sound more like a Jedi Master than an inexperienced Padawan. Some of them are obvious; others, not so much. Keep these tips in mind, and you won’t just step up your own Star Wars game—you’ll be able to pay it forward and help other people avoid simple mistakes, too.

The light side and the dark side of the Force are so powerful they don’t need to be capitalized.

Although the use of the terms in the saga can make them sound like proper nouns, they’re really not. Characters will often omit the “of the Force” part of the equation—Darth Vader: “If you only knew the power of the dark side”—but they’re still just referring to metaphorical sides of an energy field, nothing more, and your grammar should reflect that.

On a similar note, don’t capitalize the trilogy nicknames.

The prequel trilogy is just a trilogy of prequels. It’s not some separate product that gets treated like a proper noun. The same goes for the original trilogy and the new sequel trilogy. They’re just adjectives, folks. Not every term is a proper noun.

For example, stormtroopers are just an elite branch of the Imperial Army. You wouldn’t capitalize “paratroopers” in the real world, and you don’t capitalize “stormtrooper” either. And then there are Star Wars creatures like the sarlacc on Tatooine and the tauntauns on Hoth. Although these are fictional terms, in the context of a conversation about the Star Wars universe, treat them the way you’d treat real-world creatures and leave them lowercase.

“Stormtrooper” has no space. “Clone trooper” has a space. But because George Lucas liked to make things difficult for us, the snow variant of a stormtrooper (“snowtrooper”) doesn’t have a space, while the scout variant (“scout trooper”) does. If you can master these distinctions, you’re a real trooper.

“Lucasfilm” is singular and one word.

Many professional news organizations have published stories with “Lucasfilms,” “Lucas Film,” or—shudder—“Lucas Films” in the copy. Don’t be like them. (And don’t confuse Lucasfilm with LucasArts, its video game licensing arm.)

“Lightsaber” is also one word.

A lightsaber can be a life-saver, but it’s not spelled like Life Savers candy.

There is no hyphen in “Jar Jar.”

I’m sure you can think of an appropriate joke here.

Tatooine has nothing to do with body art

Darth Maul did not go to Anakin’s home planet to get tattooed, because the planet is not spelled “Tattooine,” and make no mistake, if you misspell it with that extra “t,” Darth Maul will find you.

The word “Wookiee” has two “e’s.” That aside, Wookiee cookies are delicious.

There are two TV shows about the prequel-era Clone Wars, so remember the “The.”

Cartoon Network aired an animated series called Star Wars: Clone Wars from 2003 to 2005. Cartoon Network also aired an animated series called Star Wars: The Clone Wars from 2008 to 2014. They are different shows and should be referred to by their proper names to minimize confusion. It’s possible that I’m the only person on the planet who gets annoyed when people refer to the Emmy Award-winning second series without the “The,” but regardless, it’s wrong. Don’t do it.

There is no such thing as “Star Wars Episode 7.” It doesn’t exist. No such movie has been or will be made. If you use Arabic numerals in episodic titles, “I” will be “V” mad at you.

The term for the machine of war has two “n’s.” The term for sanctioned continuity has one.

People rarely write out the full, formal title of a Star Wars movie, but when they do, it should look like “Star Wars: Episode VI Return of the Jedi,” with the franchise and episode names in italics and a colon after the franchise name.

Stay the F away from capitalizing the “f” in “TIE fighter”

“TIE” stands for “Twin Ion Engine,” a reference to the starfighters’ propulsion system. As an acronym in the ship name, it functions as a descriptor, and thus, the word “fighter” is just a common noun.

Endor is the name of both the moon and the planet.

In 1983, the Emperor’s line “the forest moon of Endor” raised the question of whether he meant a moon belonging to the planet Endor or a moon bearing the name Endor. Unfortunately, Twitter would not be invented for another 23 years, so Star Wars fans initially had to debate this question through snail mail and telegrams. According to several canon sources, however, the answer to the question is “both.” It’s sort of like “New York, New York.”

Photo via Joel Dueck/Flickr (CC BY 2.0) | Remix by Jason Reed