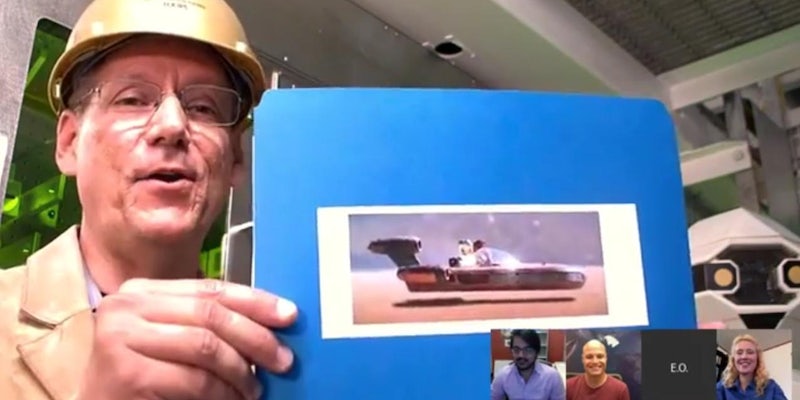 The Department of Energy got experts to answer ‘Star Wars’ questions

The nerdiest Google Hangout ever?

If there’s one thing Star Wars geeks love, it’s taking apart the minutiae of the franchise, from spaceship propulsion systems to lightsaber designs. The U.S. Department of Energy capitalized on that nerdery on Friday with a Google Hangout in which scientists from its national laboratories answered Twitter questions about energy use in the saga.

“We often talk with experts about how energy works on Earth,” Energy Department public-affairs specialist Pat Adams wrote on the department’s website. “But what if they could use their knowledge to discuss how energy works in a galaxy far far away? Star Wars fans, this one’s for you.”

The department solicited questions using the hashtag #StarWarsEnergy. A quick search of the hashtag shows that the questions—not all of which were answered in the Hangout—ranged from the obvious…

#StarWarsEnergy So what technology would be needed to create a hovering land speeder?

Which is more powerful @ENERGY, phasers or blasters? #StarWarsEnergy

…to the, shall we say, esoteric…

What does the Republic's intervention in the Wookiee/Trandoshan conflict mean for Kashyyyk's extensive coal reserves? #StarWarsEnergy

@ENERGY: What really would've happened when the Yuuzhan Vong moved one of Sernpidal's moons onto a collision course w/ it? #StarWarsEnergy

How does the Empire justify the expensive nationalization of Cloud City when tibanna gas prices have only gone up since? #StarWarsEnergy

Each researcher brought a different discipline to the table (Plesko models asteroid impacts on supercomputers, while Patel studies nuclear power as a propulsion source), but it was clear that they all shared a love of science fiction, space fantasy, and real-world energy.

For the Energy Department, the educational opportunities were obvious.

You can watch the Hangout below. Check out the Energy Department’s Twitter account for a recap of the conversation.

Screengrab via U.S. Department of Energy/YouTube