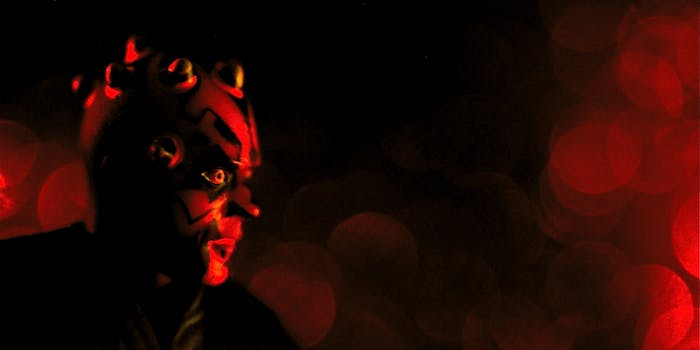 Last year, Star Wars fans learned that Lucasfilm had canceled a game from Red Fly Studio that would have starred Darth Maul. Now, one of its creators wants to bring it back.

Red Fly Studio CEO Dan Borth, who worked on the Darth Maul game until Lucasfilm axed it in 2011, did a Reddit AMA to give fans insight into the game that could’ve been. The story would have followed a young Maul from around age 9 or 11 leading up to Star Wars: Episode I The Phantom Menace.

But if Borth has his way, his game won’t just live on through a few YouTube videos. Red Fly Studio is currently developing a “next gen demo” of the Darth Maul game that it can bring to Disney and Electronic Arts in the hopes of getting it greenlit again.

“We have been burning a candle for this game since it was killed in hopes we can get it turned back on again,” Borth wrote. “IF that is to happen we need to approach EA with a demo that will impress them. I think we have that or are close to it. Still it is completely not up to us.”

LucasArts, the video-game arm of Lucasfilm that oversaw the canceled project, was itself shut down in 2013. Borth and Red Fly Studio would now have to talk to EA, because Disney gave it the license to publish PC and console Star Wars games.

For now, Borth is encouraging fans who want his game to see the light of day to tweet #WeWantMaul to Disney and EA. He’s hoping that a social-media show of force will demonstrate that there is an audience willing to pay for the Darth Maul game.

Give us a Sith worthy game. Think The Force Unleashed, but much more saturated in the Dark Side.@EA @Disney @RedFlyStudio #WeWantMaul

@EA I love Battlefront, but I'd love a Darth Maul game from @RedFlyStudio #WeWantMaul

Given all the effort Borth is putting into this project, it’s not inconceivable that he’ll suceed. After all, even Darth Maul survived his encounter with Obi-Wan Kenobi (with all the odds against him) and made a huge impact in the animated TV series The Clone Wars.