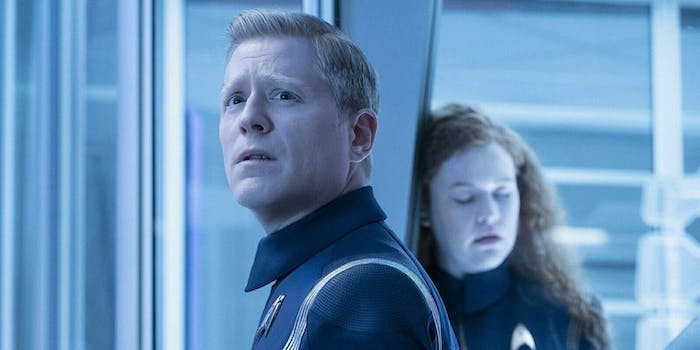 We finally got a magic mushrooms episode of ‘Star Trek: Discovery’

Kudos to Star Trek: Discovery for waiting a full season before airing an episode with magic mushrooms. For a show about a sparkly fungus-powered spaceship infested with psychic ghosts, it’s displayed remarkable restraint. And considering the fact that this episode also featured Anthony Rapp singing “Space Oddity” while drilling a hole in someone’s skull, it’s amazing how serious “An Obol for Charon” actually was.

The story kicks off with a classic Star Trek premise: While tracking Spock’s ship, the U.S.S. Discovery gets hauled out of warp by an alien sphere. Pulsing with ominous interference, the sphere infects the ship’s Universal Translator with a virus, reminding us that everyone onboard speaks different languages. Without the translator, they can barely communicate.

Fortunately, the crew includes Saru, a talented linguist who speaks 94 languages. Unfortunately, he’s suffering from a bad cold that turns into something more sinister. As the sphere interferes with more of Discovery’s systems, Saru’s condition gets worse, and he announces that he’s terminally ill. We know from earlier episodes that his species, the Kelpiens, are farmed as livestock. When it’s time for them to be harvested, they begin to display symptoms like Saru’s, signaling their inevitable demise.

This combination of old-school sci-fi and sincere emotion appears to be the new model for Discovery season 2. Like the last couple of episodes, this one emphasized vintage Star Trek themes—friendship, optimism, the romance of scientific discovery—while also being a little overstuffed. Juggling Saru’s illness, the alien sphere, and the return of Tilly’s fungus ghost (we’ll get to that in a minute), the show wouldn’t let us forget the real mission to find Spock—an ongoing arc that now includes Number One, Pike’s original second-in-command from the 1965 pilot episode. Played by Rebecca Romijn, she appeared for a brief scene discussing Spock’s disappearance, positioning her as another ally who won’t let Spock go without a fight.

Ordinarily when a main character is in mortal danger, we don’t actually think they’re going to die. But with Saru, I confess I was momentarily convinced. Doug Jones has a thriving movie career, and “An Obol for Charon” spent a lot of time on Saru’s personal relationships. Once he and Michael tearfully agreed they were family, I could plausibly believe this was his last episode. Happily, it isn’t—and Saru’s recovery spells an interesting new direction for his role.

Prickly yet vulnerable, Jones has done a fantastic job of making Saru a lovable, three-dimensional character, even when he had relatively little to work with. Season 1 barely developed Saru beyond the idea of Kelpiens having an advanced sensitivity to danger, and until Saru’s Short Trek minisode, his personal life consisted of sibling banter with Michael.

This week’s near-death experience forced Saru and Michael to admit how deep their feelings really go, with Michael promising to catalog Saru’s journals after he dies. As the only Kelpien in Starfleet, he connects to his heritage by recording his life for future generations. General Order One (aka the Prime Directive) prevents him from returning to his homeworld—an issue that’s no longer just about personal sacrifice.

Lying on his deathbed, Saru asks Michael to euthanize him by cutting off his threat ganglia. But when she lifts the knife, the ganglia shrivel up by themselves. Saru makes a surprise recovery, which is good news for us but a conflicted revelation for Saru and his Kelpien brethren. Raised in a death cult, they expect their lives to either end with this illness, or with a harvest to their predator overlords. Saru just learned they’re living a lie. Instead of being a terminal disease, this process is more like a second puberty. With his threat ganglia gone, he suddenly feels like a new man, free from the constant fear that shaped his life.

Are we about to see Saru embrace danger and adopt a thrill-seeking lifestyle? It’s sure to be a big culture shift for him, but more importantly, it sets him up against Starfleet for the first time in his career. Now he knows the truth, there’s no way he’ll stick to General Order One. In the grand tradition of Prime Directive episodes, he’ll want to break the rules for the greater good.

This is your brain on spores

Smoothly multitasking during his illness, Saru helps Michael figure out what the alien sphere really wants: It’s trying to share its dying wish through the Universal Translator, transmitting a massive archive that Pike describes as “our galaxy’s Dead Sea Scrolls.” Meanwhile, Discovery’s three wackiest characters get trapped together in the fungus lab. Tilly, Stamets, and engineer Jet Reno (Tig Notaro) are a dynamite combo, with Reno and Stamets snappily insulting each other’s expertise while Tilly gets re-infected by May the hallucinatory fungus lifeform.

Between the numerous explosions, Stamets performing DIY brain surgery on Tilly, and everyone tripping balls on fungus spores, it was easy to lose track of what this subplot was actually about. Basically, the other shoe just dropped for the Spore Drive.

We knew the Spore Drive was dangerous, but clearly not dangerous enough for Discovery to stop using it. This invited an obvious question: If Starfleet has access to such an efficient form of interstellar travel, why don’t we see it in later Star Trek series? As it turns out, it’s because power (as always) comes at a price. After smugly telling Jet Reno that the Spore Drive will make warp technology obsolete, Stamets discovers that his invention has a dark side. Using Tilly’s body as a mouthpiece, May explains that she’s from a civilization inside the mycelial network. Every time Discovery uses the Spore Drive it destroys part of their ecosystem.

Tying into last season’s tardigrade storyline, this puts Starfleet (and Stamets) in a difficult position. It’s obviously unethical to keep using the spore tech, although this concern shifts onto the backburner for the episode’s final scene. A scene that was, in a word, wild. After dosing everyone with magic mushrooms, May traps Tilly inside a carapace of fungal gloop, resulting in something that makes Stamets and Reno freak out. Then: credits. Echoing Star Trek: Voyager’s infamous “Paris and Janeway turn into newts” episode, that’s certainly a bold choice of a cliffhanger.