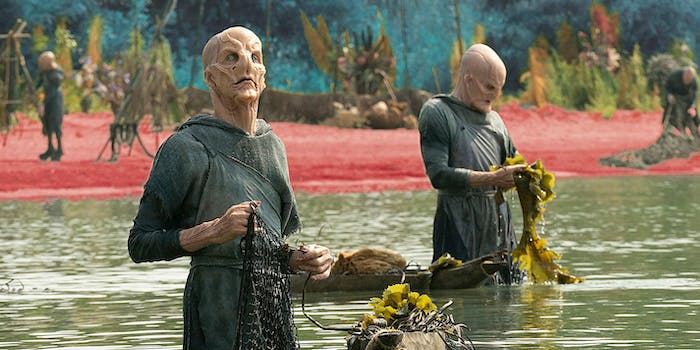 The 'Short Trek' episode looks like a must-watch for fans.

With 15 plot-heavy episodes in its first season, CBS All Access’ Star Trek: Discovery didn’t leave much time to explore the backstories of its supporting cast. Science officer Saru is a particularly mysterious figure, because his alien species is a new addition to the Star Trek franchise. We basically only know two things about Saru’s background: He’s the first Kelpien to join Starfleet, and he’s descended from prey animals, leading to a heightened sensitivity to danger.

The next “Short Trek” episode covers Saru’s backstory, so if you’re a Discovery fan and you ignored the other shorts, you should probably tune in for this one. Of the four minisodes airing between seasons one and two, this one has the closest connection to the show, exploring Saru’s background in a way we may not see elsewhere.

The trailer for “The Brightest Star” introduces his home planet, Kaminar, where he lived in a small rural community with his father and sister. According to CBS’s plot summary, “Young Saru, full of ingenuity and a level of curiosity uncommon among his people, yearns to find out what lies beyond his village, leading him on an unexpected path.”

From what little we know already, the Kelpiens are a pre-warp civilization. So, how did Saru wind up going to Starfleet Academy and climbing the ranks to become the First Officer on a starship? As every Trekkie knows, Starfleet is bound by the Prime Directive, a rule forbidding any interference in alien cultures that don’t have advanced spacefaring technology. That means someone had to break Starfleet’s cardinal rule to recruit him, and it was probably under extenuating circumstances. According to the tie-in novel Desperate Hours, Saru left his homeworld because he was “rescued” by Starfleet officers. But rescued from what?

While Michael Burnham’s Vulcan upbringing makes her a fish-out-of-water character, Saru occupies the outsider role played by characters like Spock, Worf, and Data in previous Star Trek series. He’s a unique figure in Starfleet, and this minisode will shed some light on his mysterious origins.

The Short Trek episode “The Brightest Star” will arrive on CBS All Access on Dec. 6.