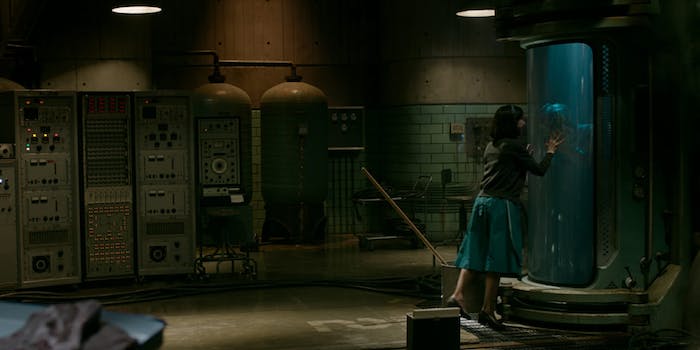 The Shape of Water

Based on what you loved about 'The Shape of Water,' we recommend which Guillermo del Toro movie to watch next.

After an impressive four Oscar wins for The Shape of Water, it’s definitely Guillermo del Toro‘s year. In other words, an ideal time to delve into his back catalog. Linked by anti-authoritarian themes, monster movie tropes, and del Toro’s distinctive visual style, his filmography ranges from blockbuster action to sensitive indie cinema. Of course, this creates an obvious dilemma: Where to start?

Based on your favorite elements of The Shape of Water, we’ve put together a guide to del Toro’s other movies. So whether you were here for the fish monster or the political subtext, we can tell you what to watch next.

Despite what it’s marketing campaign tried to say, Crimson Peak wasn’t a horror movie. It was a gothic romance, making it the top choice for people who enjoyed The Shape of Water‘s view of love and sexuality.

Granted, “gothic romance” isn’t quite the same as The Shape of Water‘s uplifting love story. Crimson Peak follows the gothic trope of a young woman falling in love with a mysterious man (Tom Hiddleston) and moving to an ominous, secluded house. They’re clearly not destined for a happy ending, but it’s still a wonderfully twisted love story with a plucky female lead, taking place in an opulent historical fantasy setting. Between these two movies, Guillermo del Toro proved himself as a rare male director who understands how to depict female sexuality in a non-exploitative way.

The Shape of Water marks del Toro’s seventh collaboration with actor Doug Jones, beginning with his role as a cockroach monster in Mimic. As many fans pointed out, The Shape of Water‘s Creature bears a close resemblance to another one of those monster roles: Abe Sapien in the Hellboy movies.

The two Hellboy movies are relatively simple action-comedies, made unique by del Toro’s flair for production design and his trademark sympathy for monstrous characters. Abe Sapien is a member of Hellboy’s supernatural crime-fighting team and an amphibian who primarily lives in a tank. He’s one of Doug Jones’ most memorable roles and an obvious precursor to The Shape of Water.

Pan’s Labyrinth takes place shortly after the Spanish Civil War, with a similar villain to Michael Shannon’s Colonel Strickland in The Shape of Water. Captain Vidal (Sergi López) is the heroine’s stepfather, a fascist commander who rules his household with an iron fist. Obsessed with order and conservative social values, he’s a sadist who tortures rebel soldiers and wants to control his wife and stepdaughter. Both films pit the whimsicality and kindness of their heroines against a villain who holds all the social power, combining fantasy with real-world examples of oppression and rebellion. They’re also rooted in very specific historical settings, giving further depth to del Toro’s political fairytale narratives.

The Shape of Water was a lot less scary than many of del Toro films, but if you’re a horror fan, we still have plenty to work with. If you were into the physical horror elements like Michael Shannon’s rotting hand, go for Blade II. This vampire-action movie is stylish and entertaining, with an excellent division of labor between the director and lead actor. Guillermo del Toro brought some brilliantly scary and compelling vampires to the screen but admitted to a lack of interest in Blade as a character. This gave Wesley Snipes a satisfying level of creative control over his most iconic role, resulting in the best movie of the Blade trilogy.

Heavily influenced by classic horror and monster movies, you’ll find genre-savvy nods throughout del Toro’s filmography. The Devil’s Backbone and Crimson Peak both revel in horror tropes, but we’d be remiss if we forgot about Cronos. Del Toro’s first feature film is about an old man (Federico Luppi) who contracts vampirism from a clockwork machine. Like The Shape of Water, it wears its monster movie influences on its sleeve, while portraying the “monster” as a sympathetic figure opposite a cruel human antagonist.

Like Pan’s Labyrinth, The Devil’s Backbone uses the backdrop of the Spanish Civil War. The main character is a young boy in a rural orphanage, beset by schoolyard bullies and the constant threat of Franco’s troops. He gradually realizes that the orphanage is haunted, introducing a ghost story that illustrates the powerlessness of childhood and the lasting impact of violence.