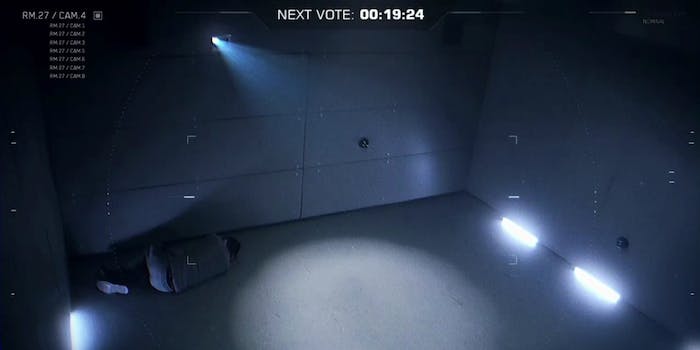 If you can figure out what’s going on here, please let us know.

Publisher Square Enix has decided to lock a person in a cage, by way of announcing a new video game.

Square Enix on Friday announced via its Twitter feed that a three-day-long interactive reveal for a new game would begin Monday on Twitch. Today a Twitch user named Can’tKillProgress is playing something called Project CKP that in turn seems to be an alternate reality game about a prisoner locked in a cage trying to figure out who put him in there, and why.

When we tuned in it looked like a loop of footage was being played from different angles, to make it appear live. We watched the prisoner go from lying unconscious, face down on the floor, to pacing around the cage and asking what he did wrong, to being tortured with very loud music pumped into his cell, and then again lying unconscious, face down on the floor.

A timer at the top of the frame is counting down to “Next vote.” We hung in for one vote, that took place during a scene in which the prisoner was being beaten by a member of the police, while a police captain conducted an interrogation.

The “vote” was to have the prisoner either stand his ground, or plead. Twitch viewers were instructed to vote in the stream chat by typing in their choice. How anyone from Square Enix actually counted votes is beyond us. The chat on the Twitch channel is a complete mess.

Reaction on Twitter to #Can’tKillProgress has so far been infinitely more interesting than the interactive reveal itself.

Update: 14,000 people are on Twitch watching a video of a guy lying on the floor. #cantkillprogress

On the next exciting episode of MAN ON THE FLOOR! #CantKillProgress https://t.co/Xwv7B0A8s9

Square Enix tries to drum up excitement with #CantKillProgress, annoys everyone instead http://t.co/izlymbGUgf

There’s plenty of speculation that this is going to be the reveal of a new Deus Ex game. That’s a reasonable guess, as “You can’t kill progress” could be a reference to the cyberpunk future of the Deus Ex universe. The most recent game in the franchise, Deus Ex: Human Revolution, released in 2011 took place during the early trials of cybernetic enhancement technology, and involved popular resistance to the idea.

In addition to the Twitch feed there are also some “clues” on an Instagram page for the ARG, but those are merely snippets of video that don’t convey much of anything right now. For the time being we’re content to just wait three days until whatever game is being announced, is announced.